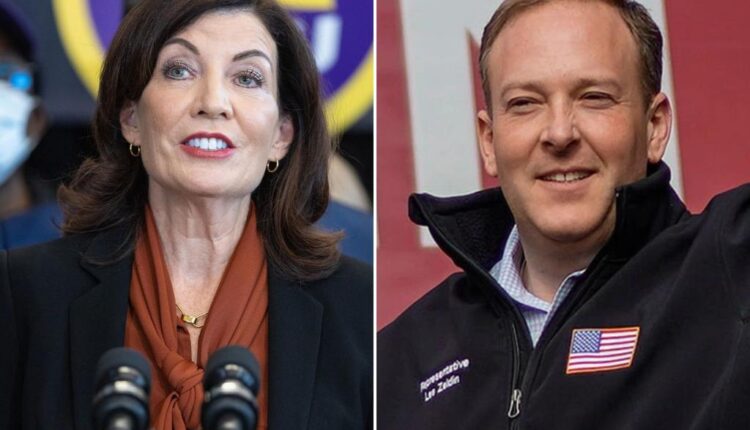 If you’re brave enough to ride the subway, you might have noticed the recruiting ad for Norfolk, Va., police officers. Even a small city like Norfolk is confident they can entice NYPD officers to leave the city.

You would think the governor of the Empire State would be insulted. But when asked during the debate why New York leads the country in residents fleeing, she refused to answer. When Gov. Hochul does answer a question she only screams “Abortion” and “Trump,” in the hope that magical forces will rescue her campaign.

I have been a Democrat my whole life, but this election I’m voting Lee Zeldin for governor. Our quality of life has significantly deteriorated under Hochul. Without a change this election, we’re going to get more of the same and our problems will spiral beyond anyone’s control.

For decades, I voted for Democrats because they were the best party for working-class New Yorkers. As a union member, I believed in the Democratic Party’s vision that working families need support. Now, those same families are constantly in harm’s way. They’re heavily taxed with deteriorating services, especially on our subways. Transit crime is up 41%. Fees and runaway inflation reduce the real-income of New Yorkers, a problem going to be made worse by Hochul’s congestion pricing scheme.

And I’m not the only Democrat who feels this way.

Zeldin and I recently met with dozens of South Asian business owners at a gas station that has been robbed several times. These owners are mostly immigrants who regularly donate to Democrats. Now, they are putting up hundreds of Zeldin signs across the state and donating to his campaign. Why? Because their businesses are under constant threat of violence.

Gov. Hochul refuses to even acknowledge that crime is a problem. Incredulously, during the debate she said to Zeldin, I don’t know why locking up criminals “is so important to you.” Hochul supports the disastrous bail reform laws, which release criminals onto our streets and incentivize prosecutors to avoid charging lawbreakers. Zeldin has pledged to fire District Attorney Alvin Bragg on Day 1. Bragg has refused to enforce New York City laws, a violation of his oath of office.

It’s not just public safety that has me voting Zeldin. It’s the economy and environment, too. Hochul is exacerbating inflation by imposing a congestion pricing tax on drivers entering Manhattan. Not only is this disastrous for our economy, but according to Hochul’s own environmental study, her plan will impose a massive environmental burden on the South Bronx due to all the cars being diverted through this neighborhood. The South Bronx already has high levels of poverty and a pollution problem. I thought Democrats were supposed to care about environmental justice and marginalized communities?

Hochul does care about the migrants. She cares so much that New York could become home to 100,000 migrants within a year. Hochul admitted that she hasn’t even called the governor of Texas to discuss the issue. She must see open borders as a net gain for New York, which is why migrant flights land in Orange County and Westchester in the middle of the night without notifying local authorities.

Parents of migrant children in our school system better look into a tutoring service. New York’s math and reading scores had significant declines post-pandemic. Hochul’s education solution? Mandatory COVID vaccines for children! Because vaccine mandates worked out so well for municipal workers and definitely did not cause unnecessary anxiety nor politicize public health.

Speaking of public health, considering drug overdose deaths are up 36%, you would think policy proposals would come from Albany to reduce drug use. In fact, just the opposite is occurring. Hochul signed into law a bill that decriminalizes the possession and sale of hypodermic needles used by addicts. It’s a barbaric policy designed to make it easier for addicts to use drugs.

There is no leadership in the governor’s mansion. Hochul was elected to Congress in a special election. Her constituents voted her out of Congress and she was then appointed lieutenant governor. Her appointment was made since she was known as someone who wouldn’t cause a stir while Andrew Cuomo and company lied to New Yorkers about pay-to-play schemes, nursing home deaths and sexual harassment cases. In a more functional Democratic Party she would never be in a leadership position.

But voters won’t be tricked this election. We can treat ourselves to the alternative. A practical, common-sense leader, who has experience in the military, state Senate and as a congressman.

Join me in voting Lee Zeldin for governor. Together, we can get back to normal — safe streets, an improved economy and better quality of life for all New Yorkers.

Robert Holden is a Democratic member of the City Council, representing Glendale, Maspeth, Middle Village and Ridgewood in Queens.