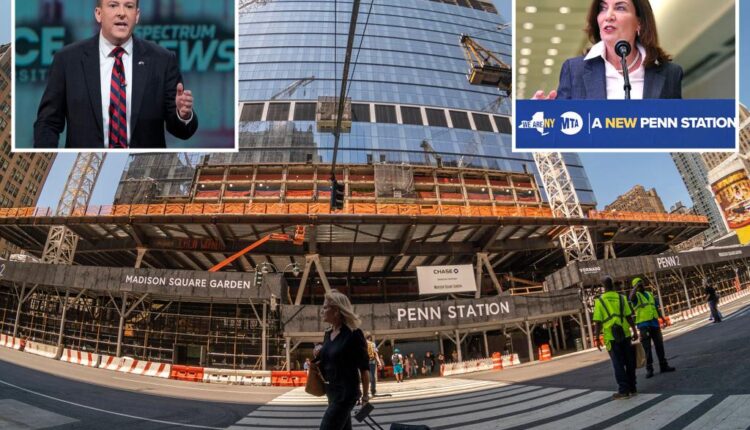 Zeldin didn’t spell out exactly what he’d do if he’s elected next week. But he told The Post:  “Kathy Hochul’s deeply flawed Penn Station boondoggle highlights just how totally unqualified she is to lead New York. She will eagerly waste away billions of tax dollars with incredible ease and zero regret.

“While the future of the Madison Square Garden lease and Amtrak infrastructure is still unresolved, Hochul is eagerly placing the cart before the horse in another epic face plant,” Zeldin said through his spokesperson.

Sources said the controversial megaproject — which calls for demolishing more than a dozen buildings and evicting hundreds of residents and businesses — is in trouble even if Hochul wins.

Three new lawsuits are challenging the legality of the  hot-button scheme to build eight new office skyscrapers even as Manhattan vacancy has reached nearly 20% as companies slash the amount of space they need.

Revenue from the new towers would theoretically pay for a “new” Penn Station to replace the hated existing one. But the suits claim that the  Empire State Development agency has failed to spell out how much money the office buildings would throw off and how much a new station would cost.

Meanwhile, Vornado Realty Trust, which owns eight of the 10 building sites, has gotten cold feet about new ground-up construction any time soon — casting uncertainty over the future of the eight-block zone centered around the station and Madison Square Garden.

Hochul inherited the Penn proposal from former Gov. Andrew Cuomo and made it her own with minor tweaks. Critics note that she received more than $200,000 in donations from Vornado CEO Steven Roth and two others affiliated with the company.

Among other claims, the lawsuits say that the sprawling Penn plan would enrich Vornado without guaranteeing to create a new train station. Emery called it a “giveaway by [former Gov. Andrew] Cuomo and Hochul to Steve Roth, the head of Vornado.”

The suits call  the Empire State Development agency’s action to override city zoning for larger towers than currently allowed “unlawful” and rejected the state’s claim that the area is “blighted,” as is required for property condemnation.

They say that after Vornado, which owns several properties near the station and has  long had larger ambitions for the area, “ditched City Hall for Albany” when the city refused to change zoning to allow bigger buildings.

The suits also attacked the state Public Authorities Control Board’s approval of a city-state plan to allow  Vornado to make so-called “payments in lieu of taxes” — which watchdogs said would save Vornado $1.2 billion and not be enough to support the state’s estimated $7 billion portion of the project’s projected $22 billion cost.

A third suit filed by lawyer Charles Weinstock demands that ESD cough up documents showing more details of ESD’s discussions with Vornado  than the agency has shared. “ESD has been particularly zealous in concealing” Vornado’s central role, the suit says.

But this week, Roth himself stunned the project’s Albany backers when he told Vornado’s jittery investors that “headwinds in the current environment are not at all conducive to ground-up development,” suggesting that any construction could be years off.

Hochul told NY1 she was still “committed to this because that neighborhood needs to be lifted up. It should not be looking like a skid row neighborhood” — although the area is full of thriving businesses.