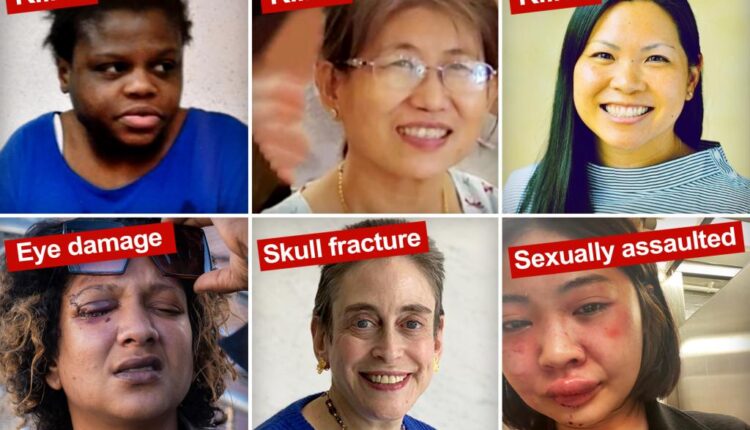 Claudine Roberts, Than Than Htwe, Michelle Go. All three were women, all were racial minorities, and all were viciously killed by strangers on the subway in the past two years.

In response to soaring violent crime underground since March 2020, women and girls, correctly fearful of riding the subway, have stayed off the trains if they can and adopted coping mechanisms if they can’t.

Claudine Roberts was stabbed to death on the A train in February 2021. Than Than Htwe was pulled down the stairs to her death in Union Square that July. Michelle Go was pushed under a Times Square train this January.

There’s also a litany of gruesome injuries, suffered by women just trying to get around town. This week, 33-year-old Elizabeth Gomes was commuting to her early-morning job at JFK when she was set upon by a crazed attacker she had tried to ignore while on the train.

We all know the feeling, trying to stay still and not draw attention while someone harasses us.

In this case, the suspect, Waheed Foster, followed Gomes off the train, throwing her into a wall and punching and kicking her. She may lose sight in one eye.

This month, a Belgian woman suffered facial injury when a group of men randomly slashed her on subway stairs in Chelsea. Also this month, a lost tourist was raped on a Manhattan subway platform.

In June, a woman suffered a broken bone when an assailant pushed her to Bronx subway tracks.

In February, a city worker, Nina Rothschild, suffered a skull fracture when a suspect repeatedly hit her with a hammer to steal her purse.

Also in February, an unnamed woman was smeared with feces in a Bronx subway station when she, too, tried to avoid a harasser who had targeted her.

What are the stats?

In August, subway riders and workers suffered 88 felony assaults, 5% more than in August 2019, despite the fact ridership was down 42%.

Per capita, each rider (on each trip) faced an 82% higher risk of being the victim of a violent felony compared with August 2019.

But most people the police arrest are immediately released — forcing more work for less result.

That includes the latest attacker, Foster, who was released on no bail twice for “minor” above-ground infractions in August despite a long violent history, including killing his grandmother (!) and attacking his sister.

State bail “reform” forbids a judge from taking into account that history in considering him a danger.

So the subway is nowhere near “normal.”

We’ve had five murders so far this year, the latest in July, making for a total of 19 since March 2020.

Prior to 2020, it took 12 years to accumulate 19 murders on the subway, despite much higher ridership.

Just as Foster was out on bail, so were the alleged killers in at least four of the post-2020 subway murders.

Riders understand the environment has changed. In the Metropolitan Transportation Authority’s latest rider survey, out last week, only 33% of people were happy with their personal security on trains, and only 23% were happy with people “behaving erratically” on trains. Seventy percent of people want more police.

Just when we need transit advocates to get people back on the subways, the “advocacy community” is increasingly irrelevant. The bros on Twitter are just mean, mocking or denying crime fears.

Yet the MTA’s unarmed staff are already terrified, with yet another transit worker assaulted last week. And half of riders are satisfied with existing service, far more than are happy with the security situation.

Tuesday, the Alliance put out a release calling wait times “horrifying” and “scary.”

Not the best language to use when what’s really horrifying is a woman possibly losing an eye — the second person to be partly blinded in a subway attack this year.

With subway ridership still less than two-thirds of normal, it’s the worst time in modern history to have a transit-advocacy community that doesn’t represent what its riders — particularly women — are worried about.