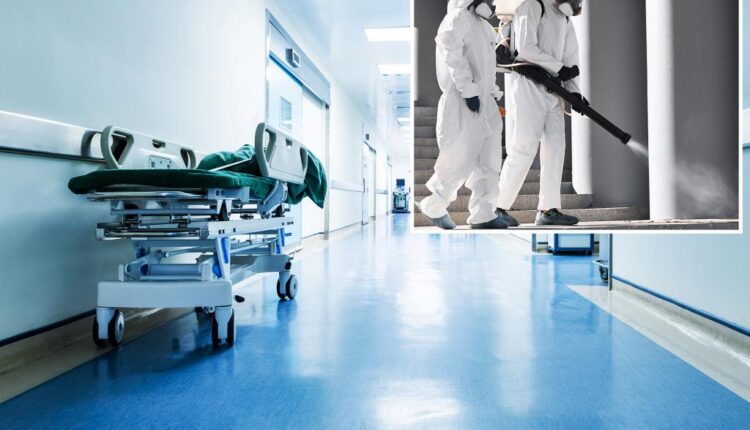 Hospital rooms, operating rooms and medical equipment are so inadequately cleaned that any patient going into a hospital is at risk of getting a deadly superbug. That’s true even if you’re going for the happiest reason of all, to give birth.

The Centers for Disease Control and Prevention’s latest data show alarming increases in the most dangerous superbugs: Acinetobacter up 78%, Candida auris up 60% and notorious MRSA (methicillin-resistant Staphylococcus aureus) up 13% year over year.

When you’re a patient, which room or bed you’re put in largely determines your risk of getting infected. If the previous occupant had an infection, your danger of getting infected with the same organism goes up 583% — almost sixfold, according to Columbia School of Nursing research.

Cleaning is so shoddy that the previous patient’s germs are still lurking.

Unlike the COVID virus, which spreads primarily through air, the bacterial and fungal organisms terrorizing hospitals are spread by touch and can last for weeks and months on surfaces. Masks are useless against most superbugs.

In Washington, DC, politicians and drug companies are pushing legislation, such as the Pasteur Act, that will incentivize companies to invest in new weapons against superbugs. “We’re playing with fire if we don’t pass” it soon, said Sen. Todd Young (R-Ind.), one of the bill’s sponsors.

Sorry, but that’s a long-term strategy. Patients who need hospitalization today, or this year, can’t wait for drugs that aren’t even in the pipeline yet.

Hospitals should be laser-focused on the strategy that will produce immediate results: rigorous cleaning and disinfection. Yet that is missing from the conversation.

Hospital mattresses are so contaminated with bodily fluids that placing a patient in a bed occupied as many as 90 days earlier by someone with C. diff (Clostridium difficile, the most common hospital infection) puts the new patient at risk, found Dr. Lucy Witt of Emory University.

Even fragile newborns are in danger. A staggering 20% of surfaces in the neonatal intensive-care unit of a Chattanooga children’s hospital were contaminated with drug-resistant MRSA, per University of Tennessee at Chattanooga researchers.

Unclean medical equipment is another culprit. Researchers traced an infection outbreak in a Galveston, Texas, hospital burn unit to a contaminated electrocardiogram wire. The last patient treated with that wire had been discharged 38 days earlier, but the superbug had stayed alive.

These are not anecdotes. Hospitals are a germy mess everywhere. A survey of 23 academic medical centers from Washington, DC, northward to Boston by epidemiologists Michael Parry and Philip Carlin found that hospital cleaners overlooked more than half the surfaces that are supposed to be cleaned. (Hint: If you have to eat lunch in a hospital room, the safest place to put your sandwich is on the toilet seat, which is almost never overlooked.)

The good news is that cleaning reduces infection rates. Researchers at Rush Medical College in Chicago reduced the spread of a superbug by two-thirds by instructing cleaning staff on which surfaces they were skipping and the importance of drenching surfaces and waiting, rather than doing a quick spray wipe.

Parry reports that at Stamford Hospital in Connecticut, improved cleaning contributed to “dramatic reductions” in infections including a 75% drop in C. diff.

Mayo Clinic’s Robert Orenstein reduced C. diff by 85% in a pilot program by wiping the surfaces around patients’ beds with a bleach wipe once a day. Why isn’t every hospital doing that?

The stakes are too high to settle for the dirty status quo. A hospital patient who contracts a superbug faces a far higher risk of death than another patient with the same medical problem who doesn’t get infected.

Two Johns Hopkins physicians, Cynthia Sears and Fyza Yusuf Shaikh, warn that despite expected “enormous strides” against cancer in the coming years, “without an equally energetic effort to beat back superbugs,” many cancer patients will still lose their lives.

Beating back the superbugs starts with hospitals cleaning up. Meanwhile, when you visit loved ones in the hospital, bring bleach wipes and clean the surfaces near their beds. You could be saving their lives.

Betsy McCaughey is chairman of the Committee to Reduce Infection Deaths.