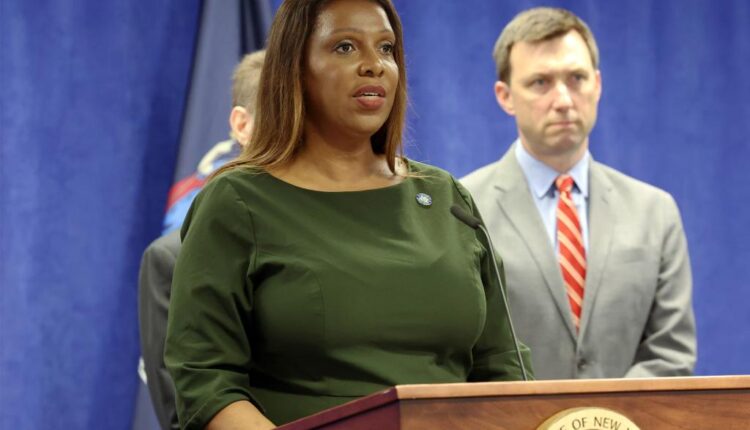 I have had the privilege to help represent the “Greatest Detectives in the World” for more than 20 years, serving alongside highly dedicated fellow union officials. In any recent memory, the union has not come out for or against a candidate for New York state attorney general. This year has to be different.

In the midst of some of the toughest times for law enforcement, Attorney General Letitia James has not made public safety a priority. And for the women and men who proudly wear a gold detective shield and all those in blue across our city and state, there has been no sign of support from the top legal official.

In late May and early June 2020, violent looters ran through the streets of New York City, smashed storefront windows and stole property. The crimes were caught on camera in many cases; others were witnessed by the brave cops who made hundreds of arrests. The city was gripped by fear — but NYPD detectives and their fellow officers held the line.

Although they were battered and deafened by the silence of many politicians, detectives continued in their pursuit to investigate hundreds of cases of burglary. Task forces were formed, evidence was pored through and long hours were worked. The outcome: Politically motivated district attorneys declined to prosecute — especially in The Bronx and Manhattan, where the majority of crimes took place.

By September 2020, more than 400 of New York’s Finest were injured during weeks of violent protests, riots and looting. Detectives and fellow officers were subjected to being hit with bricks, stabbed, punched, pushed — they even had Molotov cocktails thrown at them. Some were hospitalized, and many, many more were demoralized by the elected officials’ lack of leadership and support.

In Albany, the elected officials said nothing. They threw aside the victims, the mom-and-pop stores that were destroyed and the Manhattan businesses that employ so many New Yorkers — all who were already struggling due to the pandemic. Among those who remained silent was our state’s top law-enforcement official, AG James.

While we know that the decisions to drop the cases were not Attorney General James’ decisions, her voice as a prosecutor would have weighed heavily with her criminal-coddling colleagues.

Instead, the attorney general sued the NYPD for what she believed was handled incorrectly during the violent riots.

Police unions were not the only ones paying attention. Criminals also hear the silence from the top. They know there are no consequences or true support for the police. You only need to look around our streets or take a ride on the subway to realize the crisis we are in — and it’s not only the Big Apple that is rotting due to crime. Cities and towns across the state are suffering as police departments work harder than ever with fewer tools for success.

We need to ask ourselves: If the shooting of a young child, a grandmother or NYPD detectives doesn’t force politicians in Albany to fixed failed laws, what will?

I have worked for nearly 40 years as a member of law enforcement. I saw the turnaround of New York City in the early 1990s and the men and women in blue who sacrificed their lives to get it done. I have stood alongside courageous cops during some of the worst crime in the city’s history, and still, we got the job done.

We can get it done again today. It takes everyone rowing in the same direction. It takes cooperation and collaboration. It takes partnership from the top law-enforcement official in the state.

As NYPD detectives continue their courageous, tireless work, it seems to me that it’s also going to take a changing of the guard in many offices in Albany and New York City.

Paul DiGiacomo is the president of the Detectives’ Endowment Association, the union representing both active and retired NYPD detectives, and a 40-year veteran of the NYPD.