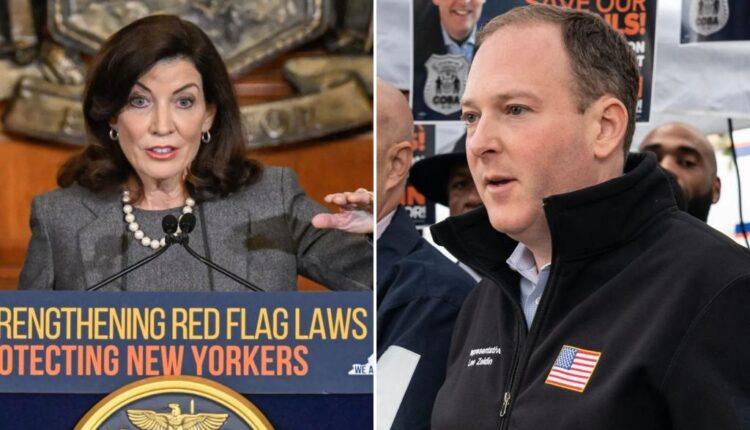 I have been pro-choice even longer than I have been a registered Democrat. I attended my first pro-choice rally in 1989 when I was still in high school. I was a member of Barnard Columbia Students for Choice in college and volunteered as a clinic escort for Planned Parenthood.

I am still pro-choice — but listening to Gov. Kathy Hochul constantly campaign on abortion is just one more reason I am voting for Rep. Lee Zeldin.

Abortion access was enshrined in New York state law in 2019, and it is not going to change. The 2018 “blue wave” in Albany gave Democratic legislators a supermajority, and they used it to pass bills codifying Roe v. Wade. In other words, when the Supreme Court overturned Roe v. Wade, nothing changed in New York. Women throughout the state still have access to safe and legal abortions.

So every time Hochul talks about abortion, it just reminds me that she is not talking about the most pressing issue in our state: rising crime. Or how many New Yorkers are leaving our state to move to places with lower taxes and safer streets. Or the state’s devastating education results revealed in National Assessment of Educational Progress scores — some of the worst in the country. And she is definitely not telling us how she will make our city safer, more affordable and a place people want to keep living in.

Anyone watching weekend football has seen Hochul ads about abortion. That’s because she wants the party faithful to keep talking about the non-issue of abortion and not thinking about the fact that nine New Yorkers were murdered in the subway this year.

If Hochul could run on her record, she would. But the governor doubled down on the failed bail-reform laws, continued Albany’s pay-to-play politics with eye-popping contracts to campaign donors and actually found a way to make Gov. Andrew Cuomo’s bad COVID decision-making worse.

What is Kathy Hochul’s record? She prevented Mayor Eric Adams from getting changes to the bail-reform law when he traveled to Albany this year. She still supports Manhattan District Attorney Alvin Bragg despite his demonstrated disinterest in prosecuting crime. The COVID tests that keep coming home in my children’s backpacks? We New Yorkers paid twice what Californians paid for the same test, and the money went straight into the pockets of one of Hochul’s biggest donors.

Speaking of COVID, Hochul masked toddlers and even appealed the statewide decision she lost, which cruelly and needlessly extended child masking while adults here were working, dining and bar-hopping mask-free. Hochul fired nurses who thought “My Body, My Choice” should apply to all their medical decisions.

In contrast, Lee Zeldin, a public-school parent himself, is on record that he won’t mandate COVID vaccines for our children — even after a Centers for Disease Control and Prevention advisory panel recommended adding them to the immunization schedule — and supports the rehiring of municipal workers fired for declining the shots. Unnecessary COVID restrictions will finally end. No more absurd rules like when New Yorkers could get a drink in a bar only if we ordered food because, you know, COVID is repelled by mozzarella sticks.

Zeldin will remove Alvin Bragg and make sure Manhattan has a DA who will uphold the laws and prosecute crime. He’ll work to repeal the state’s disastrous bail laws and give judges more discretion.

Attacking opponents over abortion instead of addressing New Yorkers’ real concerns is not a new strategy for Hochul. Ironically her last target was New York City’s most radical leftist, the personally pro-life Jumaane Williams. But the sleight of hand is wearing thin, and Hochul seems to know it. Her 11th-hour pivot to belatedly start talking about crime is just more proof of her insincerity. New Yorkers desperate for safer streets and subways could not get her to focus on crime, but her sagging poll numbers seem to have jolted her to reality. Too little, too late.

As a pro-choice New Yorker, I am relieved to know that women’s right to access a safe, legal abortion in the beginning of a pregnancy is protected in state law. But I am voting for a governor who will bring safety back to our city, protect our children and families from government overreach and once again make New York a place to aspire to, not escape from.

Maud Maron is a co-founder of Parent Leaders for Accelerated Curriculum and Education (PLACE- NYC) and former Democratic congressional candidate.

Covering for the prez, West doesn’t need to topple Vlad and other commentary