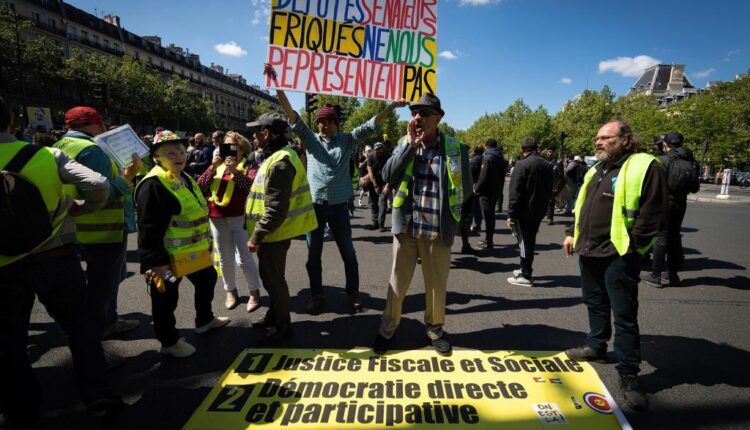 Want to be Hitler? You don’t have to hate Jews, invade Poland or grow a silly mustache. There’s only one thing you have to do: Win an election against the left, or even look like you might.

We’ve seen that for years, of course. Democrats have likened every GOP presidential candidate back to Tom Dewey to the Austrian corporal.

When the Tea Party movement — best known for leaving the sites of its protests cleaner than it found them, in stark contrast to lefty groups like Occupy or BLM — appeared on the scene, they were immediately likened to Hitler’s brownshirts.

To listen to the Democrats and the media (I repeat myself), the Trump administration was a Nazi reign of terror over America, though none of those critics wound up targeted by the Gestapo. (That fell to pro-life activists and Trump supporters under the Biden administration.)

It’s not just in America. In France, farmers angry about government policies that were putting them out of business who protested by wearing yellow vests were quickly vilified as Nazi-like. “Immediately, the protesters were denounced as xenophobes, anti-Semites and homophobes,” observed French geographer Christophe Guilluy. “The elites present themselves as anti-fascist and anti-racist, but this is merely a way of defending their class interests.”

Yes, the story of recent politics is one of the West’s elites dividing people by race, fomenting antagonism to serve their own purposes, and posing as the only ones who can protect society from the bigotry and violence of . . . voters.

It happens over and over again (see President Donald Trump’s 2016 election or Brexit), and every time they run the same script.

They’re doing it again in response to this week’s election in Italy, which elevated Giorgia Meloni to be Italy’s first female prime minister. She identifies as a mother, a Catholic and an Italian and says she wants what’s best for the Italian people, not what serves the agenda of the Western gentry class.

This makes her . . . well, not Hitler exactly, but since it’s Italy, Mussolini.

At least, that’s what you’d think from the press coverage. Headlines call her the “most far-right” ruler since Mussolini and speak darkly of fascism and so on, according to the familiar script.

This time, at least, there has been some pushback from her liberal opponent, former PM Matteo Renzi, who said, “Personally I was against Giorgia Meloni. I’m not her best friend. We are rivals, but she is not a danger to democracy. The idea there is a risk of fascism in Italy is absolutely fake news.”

Yet the question is why. Why does the liberal press constantly go out of its way to portray any threat to the status quo as a Nazi or fascist?

Well, you can’t call non-elite figures on the right communists, because 1) those people are on the left, and 2) the press generally thinks of communists as good guys.

So you go with the most loaded remaining terms, and that’s various accusations of bigotry and fascism. We’ve seen the same thing at home with Joe Biden standing in front of uniformed Marines on a blood-red stage calling Republicans fascists. (Or, “semi-fascists,” whatever that means.)

We used to teach kids in school that politics was a game of give and take. My own former US senator, Howard Baker, was famous for saying that you should listen to your opponents: “The other guy might be right.”

If you lost an election, that meant you weren’t doing what the people wanted. It was time to take stock, adjust your positions and try again next time while serving as the loyal opposition in the meantime.

Now any election the left loses is treated as an existential struggle, the equivalent of war. And all’s fair in war. Calling your opponents Nazis justifies whatever you want to do to them, and makes you the good guy when you do it.

Hurray for Matteo Renzi for showing that Italian politics isn’t as far-gone into this slough of hatred as our own. But then, the Italians have an advantage: Some of them still remember what real fascism looks like.

The iPhone 6 is now a vintage Apple product