Why Ron DeSantis looks just like Bill Clinton in 1992 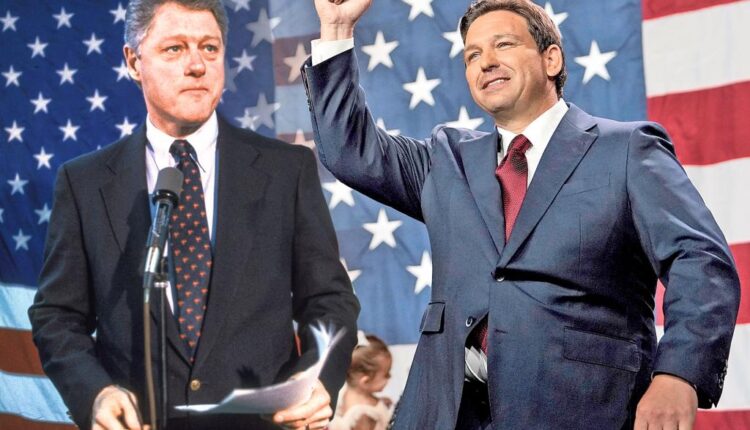 In attempting to describe Florida Governor Ron DeSantis over the last four years, the press has reached for a whole host of inapt comparisons: He’s Donald Trump! He’s Scott Walker! He’s Satan! But none of these seem right.

Instead — and hear me out! — he may well be Bill Clinton.

No, not morally. Despite Donald Trump’s grotesque insinuation that there is something “unflattering” about DeSantis that only he knows about, there’s no indication that Florida’s governor is anything other than an upstanding husband and father.

Like Clinton, DeSantis has sensed — and taken advantage of — a changing demographic environment.

Aware that his party was struggling to win elections, Clinton enthusiastically aligned himself with the moderate New Democrats, and worked to develop a reputation for competence. Aware that his party is struggling to win elections, DeSantis has made some concessions to Trumpist populism, made a big deal of his practical environmentalism, and ensured that he handled bread-and-butter issues such as hurricanes with a proficiency that is beyond partisan reproach.

On Tuesday, Gov. DeSantis romped to re-election by an astonishing twenty points, taking all but five of Florida’s 67 counties on his way. This victory echoes Clinton’s 1990 big win in the Arkansas gubernatorial race, in which he won 57 percent of the vote, and took 64 of the state’s 75 counties in the process.

Speaking at his victory party last night, DeSantis noted that he had “garnered a significant number of votes from people who may have not voted for me four years ago,” and recorded that he was “honored to have earned your trust and your support.” Or, as Bill Clinton put it during his 1992 campaign, when appealing to disaffected independents: “join us, and together we will revitalize America.”

There are other similarities, too. Bill Clinton was 46 when he first ran for the White House — the exact age DeSantis will be come 2024. Both men are from modest, blue-collar backgrounds, and like to cast themselves as champions of ordinary people against corporations and elite institutions. Despite neither of them growing up rich, both men made it to Yale Law School, where they were noted for their exceptional intellects.

Really, the only things they don’t have in common is their height (DeSantis is just 5-feet-9 next to Clinton’s 6-foot-2), their politics, and the fact that, as far as we know, DeSantis doesn’t play the saxophone.

If DeSantis wins the Republican nomination for president, he would almost certainly be facing off with President Joe Biden who served two terms as vice president before becoming president himself, and whose vice president, Kamala Harris, is widely seen as incompetent. Substitute the names George HW Bush and Dan Quayle into this scenario, and one has a fairly close match with 1992.

And, just as it was for Clinton in 1992, this is Ron DeSantis’ moment. There will likely not be another like it.

Beating Donald Trump in the primaries may be difficult, but if it is to be done, the time is now. In hindsight, Bill Clinton’s nomination in 1992 seems inevitable, but, at the time, it was anything but. Clinton lost New Hampshire and Iowa, and he seemed dead in the water until a late comeback in Georgia, South Carolina and Florida made him the first sitting governor to run against a sitting president since 1948.

In politics, as in life, nothing comes easy. Both DeSantis and Clinton undoubtedly know that, too.

Crypto.com Holds 20% of Its Reserves in Meme Token SHIB