Why Putin may not be bluffing about using nuclear weapons 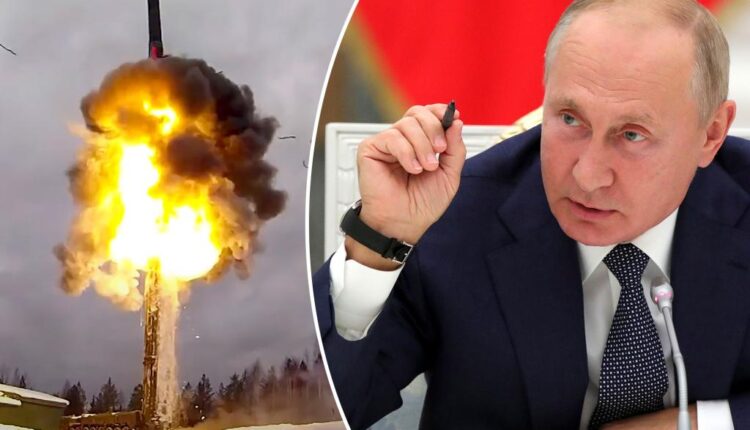 On Sept. 21, Russian President Vladimir Putin declared that he could resort to “all available means of destruction” in his war against Ukraine, pointedly adding, “It’s not a bluff.” Days later, he accused the United States of setting the nuclear warfare “precedent,” referring to the two atomic bombs dropped on Japan in 1945 to end World War II.

On Monday, NATO warned that Russia may have deployed the nuclear powered submarine Belgorod into the Kara Sea to test the Poseidon “doomsday” weapon it has aboard, capable of creating a “radioactive tsunami.”

In the past seven months since Putin invaded Ukraine, Russian forces have lost approximately 80,000 personnel and killed 9,000 Ukrainians. Thousands are wounded and maimed on both sides. Multiple cities are in ruins.

And, as Ukraine keeps fighting back and Russia looks increasingly weak, here are eight reasons why Putin is likely not bluffing, just as he says, about using nuclear weapons.

1. Putin is psychologically capable of crossing the nuclear threshold, especially when he feels cornered. According to declassified debriefings of Soviet General Staff officers, General Secretary Leonid Brezhnev “trembled” when he was asked to push a button in a hypothetical war against the US during a 1972 command-post exercise. Brezhnev kept asking Soviet defense minister Grechko: Was this “definitely an exercise?” Putin likely held a steady finger, and in fact practiced the routine many times. Several of his life experiences, including being attacked by a rat when he chased it into a corner as a youth, have taught him to fight his way out rather than give up. “I just understood that if you want to win, then you have to fight to the finish,” he is quoted in one of his biographies, “Vladimir Putin. Life History.”

2. Putin likely thinks this is his “last and decisive battle.” When he hears calls by Western officials to try him in an international court as a war criminal, he fears he may end up like Iraq’s Saddam Hussein, captured by US soldiers in 2003, convicted of crimes against humanity by the Iraqi Special Tribunal, and put to death by hanging. He also fears the fate of Libya’s Muammar Gaddafi, who was shot in the head by his own people in 2011. Both events had a profound psychological imprint on Putin, convincing him of America’s bad intentions.

3. Russia’s post-Cold War doctrine includes a nuclear fallback option designed exactly for the kind of situation Moscow now faces. In the 1990s, the General Staff developed, on Putin’s orders, a limited nuclear war doctrine called “escalate to de-escalate.” The doctrine stipulates that a low-yield nuclear bomb can be detonated to shock an opposing force to abandon a fight and end a war. Russia’s nuclear stockpile is flexible by design, with yields ranging from below one to 1,000 kilotons, allowing Putin to launch a “demonstration” strike in the Black Sea, for example, or to cause some serious damage in Ukraine.

4. Putin likely believes that he will use nuclear weapons for the same reason the US did in Japan during WWII — to end the conflict. In August 1945, the US detonated two atomic bombs, “Little Boy” and “Fat Man” over Hiroshima and Nagasaki, killing 149,000-225,000 people. The rationale was to hasten victory, while minimizing both US and Japanese casualties. Neither Japanese city became uninhabitable, and both returned to functional levels approximately a year after the bombs were dropped. Many of Russia’s warheads are under one kiloton, with much smaller explosive power than the 15-kiloton bombs used in Japan, and Putin likely theorizes that these weapons are usable on a battlefield.

5. The outcome in Ukraine is an existential issue for both Russia and Putin. While it’s not accepted by the West, Russia views former Soviet states like Ukraine as part of its sphere of influence and a strategic security perimeter. With NATO’s admission of the Baltic states, the distance between NATO forces and Russian territory has shrunk from 1,000 to 100 miles. Russia sees the close proximity of this adversarial military alliance as a “red line,” and as Washington supplies Ukraine with more capable weaponry, jittery Putin is likely calculating that he must retain his strategic buffer.

6. Putin orchestrated the annexation of the four seized regions of Ukraine, following phony referendums, precisely so he could use the nuclear option. By formally declaring these territories part of Russia, he has cleared the requirement in the Russian military doctrine for the deployment of nuclear weapons. Officially, the unclassified doctrine permits Russia’s Commander in Chief to use these last-resort weapons only in a defensive scenario to protect Russian territory. But the doctrine also allows “first-use” of nuclear weapons even in an existential battle, like the one in Ukraine, in order to stave off defeat and end a conflict.

7. Putin is worried about projecting weakness to China. Although Putin and Chinese President Xi Jinping have formed an anti-US strategic partnership, Russia views China — and the two countries’ shared, indefensible 2,600-mile border — as a long-term security threat. Putin may calculate that launching a nuclear strike in Ukraine will demonstrate Russia’s strength and resolve to Xi.

8. Putin probably estimates that launching a low-yield nuclear strike in Ukraine will not trigger a US response, and certainly not with nuclear weapons. Russian planners believe Americans have a low tolerance for war casualties, especially for nuclear risks. President Obama’s “Global Zero” initiative to eliminate the US nuclear arsenal over time reinforced this belief, along with President Biden’s announcement that US forces would not intervene shortly after Russia attacked Ukraine. While Russia currently holds a 10:1 ratio advantage over the US in tactical nuclear weapons, Biden canceled a program to develop a new low-yield nuclear-tipped sea-launched cruise missile authorized by former President Trump specifically to counter Russia’s “escalate to-de-escalate” strategy.

Putin relies on the sentiment prevailing in the West that nuclear warfare is “unthinkable.” The Russian strongman may very well be miscalculating. But cornered and desperate, he has less than ever to lose. Believing he and Russia face an existential threat, he may be completely serious when he says, “this is not a bluff.”

Rebekah Koffler is the president of Doctrine & Strategy Consulting, a former DIA intelligence officer, and the author of  “Putin’s Playbook: Russia’s Secret Plan to Defeat America.”

Massive savings on a little iPad – $100 off iPad Mini