Why New York Democrats should vote for Republican Lee Zeldin 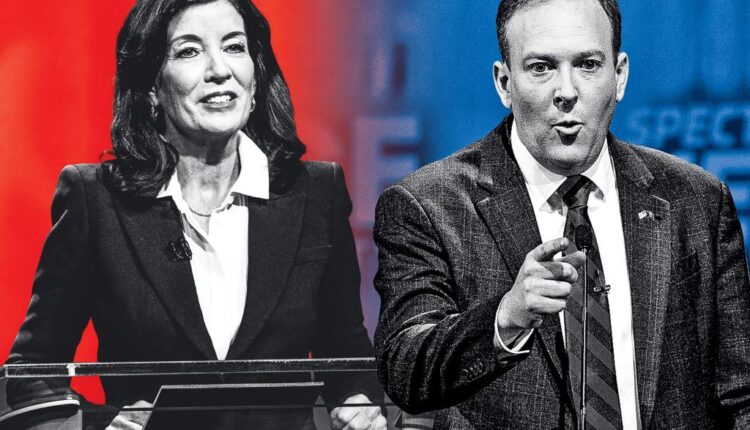 New York is no longer controlled by the Democrats of yesteryear. Hugh Carey, Mario Cuomo, Ed Koch, and even David Dinkins would be aghast at what’s happening right now in the name of their party. They were sensible, pragmatic leaders who were willing squarely to face decline, decay, and despair, call it out for what it was, and demand that we fight against the forces of entropy to build a New York worthy of being called the Empire State, and New York City the Greatest City in the World.

No more. Look at who’s in charge in Albany. Kathy Hochul was a washed-up upstate nobody when Andrew Cuomo plucked her from obscurity because he needed a woman on his ticket—preferably one who would never upstage him. Little did anyone guess he would stumble into scandal and we’d wind up with a tool of the Erie County machine running the state.

New York is now run as a one-party state, and the problem when one party is in charge is that the usual moderating effects of the primary-and-general election system break down. Typically, candidates can run to the extremes in the primary, but can’t go too far out there because they have to come back towards the center in November. But when the general election is an afterthought, then party extremists tend to dominate the primaries.

That’s what’s happened in New York. There’s no longer such a thing as being too far to the left, and longtime liberal elected officials tremble in fear that they will be “primaried” by a progressive. Then, a few years later, the progressives get called hacks and sellouts, and are taken out by Democratic Socialists who promise to defund the police, abolish jails and prisons, and seize private property for which they can imagine better uses.

This game of ideological leapfrog will lead us straight off a cliff.

Kathy Hochul is no ideologue, but she doesn’t have the backbone to stand up against the crazies in her party. The criminal justice “reforms” of 2019 have created a public safety disaster in New York City, where violent crime and street disorder are off the charts. The people in power know this, which is why they are lying about it so persistently, demanding that we stop looking with our eyes, and substitute their fudged, partial data for our own common sense.

It was only after the latest polls showed that Lee Zeldin was gaining on her that Hochul ventured down into the subway system (standing outside the turnstile, I should add) and promised to pick up the cost of some overtime shifts so the NYPD can — fingers crossed! — dissuade tomorrow’s maniac from throwing a stranger onto the tracks.

New York is spiraling. There is a huge fiscal crunch looming, the state is losing taxpayers, and the current leadership refuses to admit that we have a problem. Electing Kathy Hochul is only going to confirm her deluded sense of fitness for the job and solidify the current downward direction of the state’s affairs.

Lee Zeldin may not be your idea of a fun night on the town, but there is no question that he will apply the brakes on this slow-motion train wreck. He will provide counterweight to the extremists in the legislature. He will fire Alvin Bragg and any other DA who refuses to do their job. He is not going to do anything — he can’t do anything — about abortion in New York, whatever Hochul says, and everyone knows it. The right to choose is enshrined in our laws. Meanwhile, making an issue of Zeldin’s support for Trump is, frankly, sour grapes and a distraction on Hochul’s part. Anyone who hates Trump enough to let Hochul destroy New York over it has bigger problems — it’s like burning down your house because you ran out of milk.

The wheels have come off this clown car, and the clowns seem happy to let the car careen down the hill. We can’t go on this way much longer. New York Democrats, this is no time for ballot purity. This state of emergency demands that you look beyond party identification and vote against the candidate who is running us into oblivion.

Seth Barron is managing editor of The American Mind and author of “The Last Days of New York.”

Why 60 years of feminism has not made women any happier

The Teacher Exodus Continues Whether You Care or Not