Why moderates must choose Zeldin over Hochul 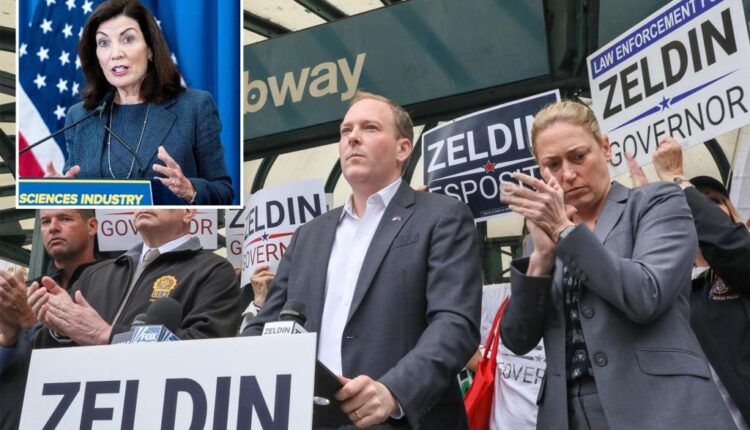 Donald Trump Sunday endorsed the gubernatorial candidacy of Republican Lee Zeldin of Long Island. Will that help or hurt in deep-blue New York?

Well, open-minded moderates matter in the Empire State. They should consider this:

In the 2012 flick “Argo,” hero Ben Affleck has advanced an outlandish scheme to help free Americans trapped in Iran during the Islamic revolution.

“You don’t have a better bad idea than this?” asks his CIA boss. “This is the best bad idea we have, sir,” is the deadpan answer.

It all works out, as you know it will, because it’s a movie. Yet the scene succeeds because everybody knows imperfect options are a part of real life — especially in politics — and outcomes are never guaranteed.

In New York, a lot of voters are — to put it mildly — disinclined to take guidance from their hometown bluster-meister. “Isn’t there a better bad idea than a Trump guy?” many have asked. (Including, quite frankly, me.)

Well, no. The Trump love notwithstanding, Zeldin is a savvy politician, well-versed in New York and its problems and strongly inclined to buck the state’s insanely progressive headwinds.

And now the respected RealClearPolitics Internet polling-aggregation site is reporting the race to be a toss-up — something of a stunner in a one-party state like New York.

How can this be?

Probably because Zeldin’s opponent — accidental-incumbent Gov. Kathy Hochul — is a cipher. She was brought to prominence by the disgraced Gov. Andrew Cuomo. But while she displays none of her predecessor’s sophisticated grasp of issues, she has proven every bit his equal in deferring to the hard-left cabal largely controlling Albany.

And even Cuomo, a wizard at pay-to-play politics, must stand in awe of the campaign cash-stash Hochul has clawed from New York’s special-interest favor-seekers.

People are catching on: While Hochul may not be the least-best bad candidate to pop up lately — New York ran out of statesman-level leadership when Pat Moynihan died — she hasn’t earned anybody’s support.

Here’s the question: With real change apparently possible, shouldn’t moderate voters be looking for the best offer on the table? Trump gives a lot of New Yorkers hives, for sure, but he’s not the issue. Four full years of Cuomo/Hochul-style policy-making very much is.

Its post-pandemic economic performance, according to the Empire Center for Public Policy, has been so sluggish it is retarding the national recovery.

Its public schools are in thrall to race-equity zealots and teacher-union logrolling.

Its budgeting practices are driven by special interests — public-employee unions in particular — and spending is up an eye-popping 27% since 2020.

In New York City, the Adams administration is evolving into a big-talk/low-performance patronage pig-out, and it needs close scrutiny.

Most recently, as this newspaper reported over the weekend, stretches of Broadway have devolved into cocaine bazaars. And why not? Those “reforms” have made meaningful narcotics enforcement both difficult and pointless.

Shootings command news reporting from Long Island to Buffalo; violent-crime stats are up sharply everywhere, and near-daily bloodshed in Gotham’s subway system is an intractable impediment to post-pandemic recovery.

Almost universally, the poor and persons of color are the victims — the same people the “reforms” allegedly were meant to protect.

Zeldin says he’ll reform the reforms, and while he may be overpromising — the Legislature and pro-criminal district attorneys are at the root of it — Hochul’s approach is to pretend there’s no problem in the first place.

Her latest effort to defuse the crime issue arguably is her most ludicrous: She’s promising an unspecified sum dedicated solely to helping crime victims cope.

That is, if a career-criminal maniac slashes your throat on a subway platform, the Hochul administration will help pay for your funeral. And Albany will help replace stolen iPhones, too.

As for a rollback of the 2019 “reforms,” Hochul is afraid to try, doesn’t know how to try or simply doesn’t want to try. All three, probably, but where does that leave law-abiding New Yorkers?

Zeldin, again, is not the least bit bashful about such things. And, again, the polling suggests people are starting to catch on.

Maybe they get that a vote for Lee Zeldin isn’t such a bad idea after all. He may be carrying a little baggage — but Hochul’s hauling a freight-train full.

If high taxes keep the Jets from attracting talent, what chance do ordinary NY businesses have?