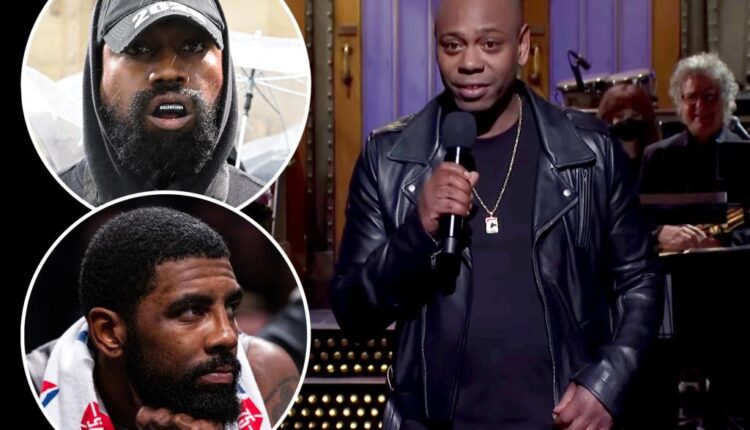 Dave Chappelle had the “SNL” audience — mostly — eating out of the palm of his hand Saturday night with his opening monologue.

But in a bid to skewer our preconceptions on anti-Semitism, all he did was feed into the most common, most boring, ill-educated tropes and give them a platform on network TV. Watching it, I did a Tina Fey-style eye roll.

Yes, Dave, everyone knows the Jews run Hollywood, oh ha bloody ha. Let me just reach for my Depends, you made me laugh so hard.

Yes, Dave, everyone knows the Jews take off multiple holidays that you can’t even pronounce — “sha-na-na,” anyone?

Yes, Dave, everyone knows the Jews run the media and, let’s face it, the entire economy. While we’re at it, I’ll let you in on a secret: We run the White House, too! And let me just introduce you to my cousin, Mr. Rothschild.

Amid slight titters from the crowd, he added: “But that doesn’t mean anything! You know what I mean? Because there are a lot of black people in Ferguson, Missouri, it doesn’t mean we run the place.”

The most troubling part of his monologue came when he brought up Brooklyn Nets star Kyrie Irving: “Kanye got in so much trouble that Kyrie got in trouble. This is where I draw the line. I know the Jewish people have been through terrible things all over the world, but you can’t blame that on black Americans.”

The line was met with crickets, until a single audience member whooped.

“Thanks, the one person that said ‘woo,’” Chappelle said.

Can we all just remember that Irving was not blasted because he’s a black American? He was called out because he posted a link to an anti-Semitic film. For which he apologized somewhat late in the game.

And this is where we get to the point — artfully and often raised by British writer David Baddiel in his book “Jews Don’t Count.”

Because people think we have power, money and entitlement, it’s fine to mock “The Jews,” even under the guise of making fun of the tropes of anti-Semitism. But there are just 7.6 million Jews in America — out of a total population of 330 million — and we can’t all have millions in the bank or monopolize an entire industry.

He also said of Kanye, “It’s a big deal, he had broken the show business rules. You know, the rules of perception. If they’re black, then it’s a gang. If they’re Italian, it’s a mob. If they’re Jewish, it’s a coincidence and you should never speak about it.”

Chappelle has made millions from his cutting barbs on being black, he’s renowned for being one of our sharpest comics. Following Saturday night’s show, helmed by longtime executive producer Lorne Michaels — who is Jewish — Chappelle’s fans were quick to praise him for his biting commentary.

But it takes one cursory Google search to find the recent uptick in anti-Semitic attacks across the world, and jokes like Chappelle’s only help fuel the fire.

Yes, comedy is supposed to be provocative. And this is by no means a call to banish Chappelle into the hinterlands of social media purgatory. Please spare us the cancellation police.

All I’m saying is, as a Jew, I can safely tell you, Dave — you just weren’t funny.