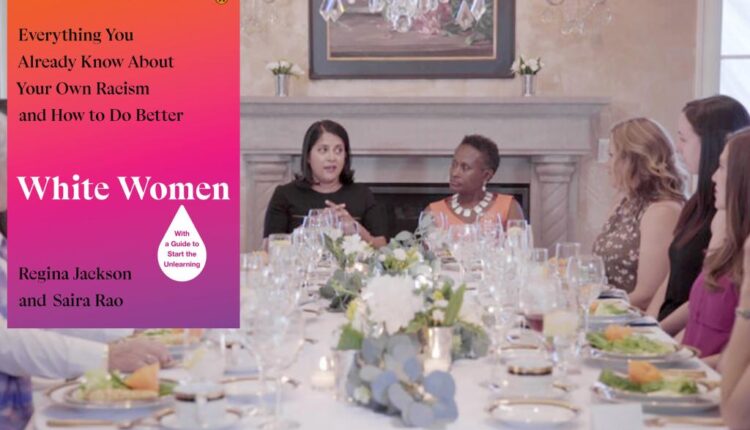 People have long sought forgiveness for their transgressions. In days past, they may have turned to penance, confession or even self-flagellation. Today, white women shell out $2,500 to be told how racist they are.

That’s the business model of Race2Dinner, an organization co-founded by Regina Jackson and Siara Rao in 2019. One white woman volunteers to host a dinner party at her home, and eight to 10 others join for a two-hour session with the founders — one who is black, the other Indian American — to discuss their role in perpetuating white supremacy.

Their dinners are for you if “you want to build a racial identity — a white identity — that is not based on whiteness, white supremacy or the oppression of Black, Indigenous or other people of color,” its website reads.

Seats are reserved solely for liberal white women. According to Jackson and Rao, women who voted for Trump are a lost cause. And men aren’t even worth talking to.

“We don’t even engage with white men at Race2Dinner,” Lisa Bond, the company’s self-proclaimed “resident white woman,” recently told John Stewart on his new Apple TV show. “Because, quite honestly, if white men were going to do something about racism, you had 400 years.”

Now, those who can’t afford the luxury of being scolded in person can be guilted at a discount with Jackson and Rao’s new book, “White Women: Everything You Already Know About Your Own Racism and How to Do Better,” publishing on Nov. 1 by Penguin Books (described by the authors as a “white institution”).

In it, the authors address white women directly:

“A critical component of upholding white supremacy is employing a feigned ignorance that brings you here, to these pages, asking a Black woman and a brown woman to explain to you the nuances of this script; a script you wrote, directed, and produced, and from which you’ve amassed dizzying wealth and power. A critical component of our work is radical honesty. On our part, sure, but — more crucially — on yours.

“Resist the urge to exceptionalize yourselves,” they warn readers, “to set yourselves apart from the women and scenarios and behaviors we discuss in these pages. You are them. They are you. Yes. You. Are. YES. ALL. WHITE. WOMEN.”

The women who sit at Race2Dinner’s table — or read their book — are bound to squirm in their struggle sessions. That’s by design. “The pain and hurt and discomfort are not ancillary to anti-racism work,” Jackson and Rao write. “They are the guts of it.”

Naturally, the women who flock to their dinner tables are looking to help in the fight against racism. But the answer they’re offered is simple — and disempowering: everything they do to help the cause is actually hurting the cause.

Just looking at White Women’s table of contents hammers that home. Some chapter titles: “Your Nice Is Actually Evil,” “Every Time You Say Love Trumps Hate, You Are Enabling Hate to Flourish,” and “Your Quest for Perfection Is Killing Us. And You.”

According to the authors, it’s perfection — “a white woman’s goal in life” — that stands in the way of being a better anti-racist.

“You cannot even start the process of extracting white supremacy from your being until you extract the need to be perfect,” they write. “Anti-racism work depends on your acknowledging your imperfections, namely how you have been born into and nurtured by a white supremacist society.”

But, once you divorce yourself from the need to be perfect, you’ll soon find that there’s absolutely nothing you can do right as a white woman who wants to advocate for racial progress. In fact, to Rao and Jackson, you’re the precise opposite of perfect.

Remember when Martin Luther King dreamed that his children “will not be judged on the color of their skin but by the content of their character?”

Well, any advocacy for “colorblindness,” according to the authors, is actually a sign you’re racist, too. And it’s an “abusive misinterpretation” of King’s words that enables you “to ignore the very real harm of systemic inequalities.”

Think you’re being helpful by calling yourself an ally for racial change? Wrong. The authors define an ally as “a white person who thinks they are doing the right thing, on the right side of history.” But, they chide, “you are so wedded to your good intentions that you are unable to see how your actions are harmful even when we tell you that they are. To your face. Repeatedly.”

Think having a non-white spouse or biracial children means you can’t be a white supremacist? False! “Reality: You can’t f–k your way out of racism.”

Think you’re not a racist? Also wrong. Jackson and Rao say the claim “I am not racist” is “a statement made by white people that we hear as ‘I am very racist.’”

Surely it’s a good thing to want to be involved immediately when racial violence is exposed, such as after a police killing, right? Nope. According to the authors that means you’re guilty of “White Urgency,” and it’s a surefire sign you will be “the first to lose interest once it [becomes] clear that anti-racism is a lifelong practice and journey and not a one-day sample sale.”

Think being positive and providing a glimmer of hope might be helpful in tense conversations? No, say Jackson and Rao. That’s “toxic positivity”— as they define it, “a white woman’s need to bright side everything which requires sidelining and erasing talk of oppression.”

Or how about just simply being nice? No, no, also bad. According to the authors, it’s “something white women aspire to, which means smiling to your face and stabbing you in the back.”

Given up yet? Ok, fine. How about just shutting up and promising to “listen and learn”? Well, that’s also “a white euphemism for ‘I already know and don’t care.’”

The bottom line here: liberal white women can’t win. No matter what you do, you’re irredeemably racist and part of the problem as a consequence of your skin color.

As a white woman, I am supposedly the author’s target demographic, and I do believe that talking about racism and grappling with our complicated history is a necessary step in paving a path forward. But Jackson and Rao’s mission does not guide the way to a brighter future. It saddles white women with collective guilt and gives them no hope or actionable advice.

Rather than bridging divides and emphasizing common humanity, Jackson and Rao are exacerbating the racial divide. They are telling well-intentioned white women they have no agency, no power to make change happen. There is nothing we can do in the name of progress except pay the authors for redemption in order to cleanse ourselves of the original sin of being born white.

Jackson and Rao have built a profitable business model predicated on cynicism. And I, for one, am not buying it.

The outrageous, Democrat-friendly census errors you’ve heard nothing about