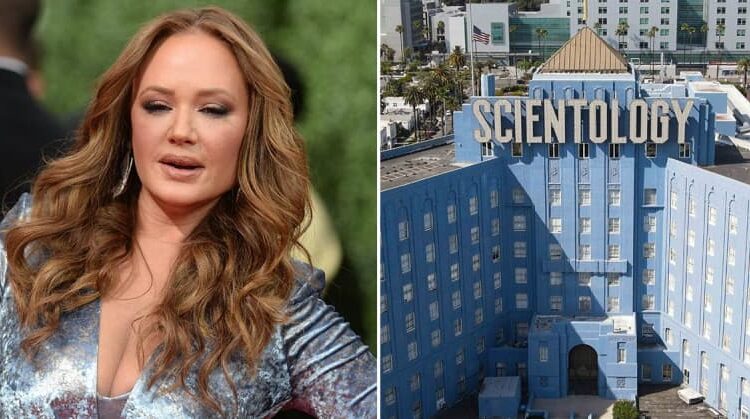 Leah Remini is demanding an investigation be opened into a Los Angeles police officer who is accused of leaking confidential information to the press because he’s the same man she filed a missing person’s report with when the leader of the Church of Scientology David Miscavige‘s wife vanished 15 years ago, RadarOnline.com has learned.

Remini, who’s an outspoken ex-Scientologist, called out LAPD veteran Cory Palka after she learned he has been accused of leaking private information about sexual misconduct accusations against former CBS CEO Les Moonves to the network’s executives.

The King of Queens actress claimed he was in charge of the Hollywood division where she filed her missing person’s report for Shelly Miscavige in 2013. She also shared a photo of Cory proudly accepting a $20,000 check allegedly from Scientology during an LAPD charity event.

Bringing up the recent allegations against Cory, Remini tweeted that it “begs the question…what investigative information has he provided to Scientology over the years?” Shelly has not been seen in public since 2006.

Remini recalled her shock when she discovered that Shelly was not at Tom Cruise‘s wedding to Katie Holmes, which was dubbed “the wedding of the century in Scientology.”

The actress said when she left the Church in 2013, her “first goal was to try and find Shelly,” so she filed a missing person’s report.

“Hours after I filed the missing person’s report, the case was closed, and the LAPD announced to the press that they had found Shelly,” Remini explained. “This news was released first to the press, not to me, who filed the report. I learned about all of this from the media, not from the LAPD.”

She claimed that when she asked if detectives had spoken to or seen Shelly, she was told that was “classified” information.

“Scientology has always done a great job at ingratiating itself with law enforcement despite being experts in obstructing justice,” she alleged, adding that the Church often “hires off-duty LAPD cops as security and donates to LAPD charities.”

According to Remini, when she met with Cory about Shelly’s disappearance, “he had a letter on his desk thanking him for all his help with Scientology matters and inviting him to come and have lunch, as a guest, at the Celebrity Center.”

She said she was “so alarmed by Cory’s closeness with Scientology” that she offered to double any donations the Church offered if he stopped accepting charity from the religious group.

“Cory was incredibly dismissive,” she wrote.

Remini also provided emails allegedly between Cory and top Scientology officials — but she said he’s not the only LAPD officer who had a “friendly” relationship with the Church.

“LAPD Lieutenant Andre Dawson, the detective in charge of my missing person’s report into Shelly Miscavige, also has a cozy relationship with Scientology,” Remini stated, showing a photo of him “speaking at Scientology’s celebrity center at an event about human trafficking.”

Remini ended her thread by calling for an investigation “into Cory’s relationship with Scientology and the LAPD’s interactions with Scientology overall,” adding, “the LAPD must not attend Scientology events anymore or accept their funds.” She concluded by asking the age-old question: “WHERE IS SHELLY???”

Remini left Scientology nearly 10 years ago and has been on a crusade to expose the Church through her show,Scientology and the Aftermath. Most recently, her name was called out in longtime Scientologist Danny Masterson‘s trial.

The That 70s Show actor is fighting three charges of forcible rape. He faces 45 years in prison if convicted. Remini tweeted about the trial, leaving Masterson’s attorney to claim that her social media posts made it “difficult” for the actor to get a “fair trial.”

However, as RadarOnline.com reported, the judge didn’t see it that way and assured Masterson’s lawyer that “Ms. Remini’s views don’t influence my legal rulings. I follow the case law, and so whatever she is tweeting about certainly has no bearing on the court.”