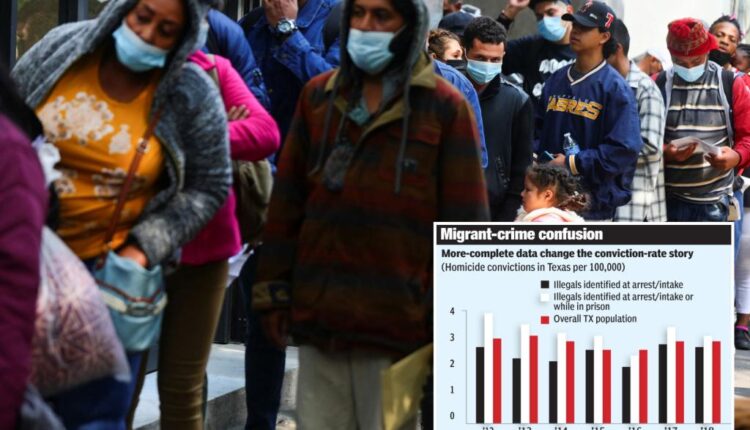 Advocates also use their supposed low crime rate to justify releasing illegal immigrants from jails, even after they have been identified. Any local cooperation with Immigration and Customs Enforcement will keep immigrants from reporting crimes out of fear of being deported — or so the argument goes.

In fact, the evidence that illegal immigrants have lower crime rates than people born in America and the idea that immigrants don’t report crimes for fear of ICE are likely wrong. And noncooperation with ICE endangers public safety and makes a mockery of our immigration laws.

It’s not so easy to determine illegal immigrants’ crime rate because most jurisdictions don’t carefully track the immigration status of those convicted or incarcerated. We do know that noncitizens, a large share of whom are illegal immigrants, represent a disproportionate share of federal offenders, but it’s not clear whether this is true at the state and local levels, where most law enforcement takes place.

Texas is an exception. The state’s Department of Public Safety keeps some of the most useful data on criminals’ immigration status, but it’s useful only if researchers understand its limits. In the last few years, widely cited studies by the Cato Institute and in the Proceedings of the National Academy of Science and a recent Cato update have misinterpreted the Texas DPS data to argue that illegal immigrants have low rates of arrest and conviction.

A new Center for Immigration Studies analysis shows that, when properly understood, Texas DPS data actually show that illegal immigrants have higher conviction rates than the general population for serious crimes such as homicide and sexual assault. (For less serious crimes, it is harder to say.)

There are some caveats. Since illegal immigrants are often not identified for years, the number of illegal-immigrant convicts in Texas is still undercounted. This is especially true for those convicted of lesser crimes carrying shorter sentences because they may be released before their status is ever discovered. And illegal-immigrant crime rates in Texas may not be representative of illegal immigrants nationally.

Perhaps most important, the relative crime rate of the illegal-immigrant population is never a reason for local jurisdictions to spurn cooperation with ICE by releasing arrested illegal immigrants before the feds can pick them up. The primary reason they should always cooperate with federal immigration enforcement is simple — doing so gets potentially dangerous people out of the community.

The argument against local law enforcement cooperating with ICE is that immigrants are reluctant to report crimes if they fear deportation. But there is very little actual evidence for this.

The National Crime Victimization Survey, which is specifically designed to measure the public’s willingness to report crimes, shows that immigrants, including noncitizen Hispanics, are actually somewhat more likely to report crimes than the native-born. This is true of immigrants even in the South and outside big cities, where cooperation with ICE is most common. There’s simply no indication local cooperation with ICE leads to less immigrant-crime reporting.

Of course, whatever the illegal-immigrant crime rate might be, it’s always the case that by cooperating with ICE, local jurisdictions both enhance public safety and aid the important national goal of enforcing immigration laws.

Despite all the media coverage to the contrary — Politico made the lower-crime claim just last month — the evidence from Texas suggests illegal immigrants actually have above-average crime rates, at least for the most serious crimes. This is a great reminder that just because the media keep asserting something does not make it so.

Steven Camarota is director of research at the Center for Immigration Studies.