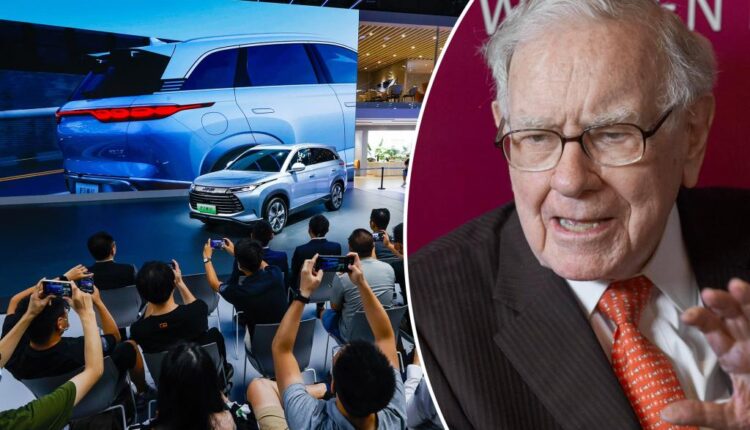 It was with great fanfare that Warren Buffet paid out $230 million for a 10 percent stake in Tesla rival BYD.  He had been to the future, and it was China.

Now, 14 years after his initial investment in China’s premier manufacturer of electric vehicles, Buffett is quietly pulling the plug on this and his other China plays.  It is worth asking why.

After all, this is the same man who parlayed a small investment into a failing New England textile company called Berkshire Hathaway nearly 70 years ago into a fortune now worth close to 100 billion dollars.  If Buffett is ditching China, it means that, in his view, the risk/reward ratio has tilted decisively into the red.

Here’s my take on what I think the aptly named Oracle of Omaha is thinking.

In a few days, the 20th Congress of the Chinese Communist Party (CCP) will open.  Party leader Xi Jinping will be supposedly “elected” to a third five-year term, but in reality he will really be locking down his control of China for life.

The 70-year-old dictator is, like the late Chairman Mao whom he greatly admires, a radical Communist ideologue. This means his decade-long drive to concentrate all power in the hands of the state—which is to say his hands–will not only continue, but accelerate.  China’s hugely successful private sector will be bled dry, and the deadly assault on the most productive members of society—people like Alibaba-founder Jack Ma–will continue.

After the likely Wuhan lab leak, Xi announced that he was personally overseeing the pandemic response.  And the policy that he settled upon to stop the spread of the coronavirus was to lock down entire cities, even provinces.

Because the lockdowns are so closely identified with Xi himself, no one in China has dared to criticize this fruitless effort to stamp out the coronavirus, even as it continues to wreak havoc in the economy.  Indeed, the immediate imposition of a rigid lockdown as soon as a handful of cases of Covid are detected has become almost a kind of loyalty test for Communist officials, a pledge of allegiance to the new Chinese emperor.

Worse yet for China’s economic prospects, a new series of articles in the People’s Daily suggests that the deadly lockdowns, which arguably kill more people than Covid, will continue for several more years.  The official press has been at pains to stress the correctness of the Chinese response, even as every other country on the planet has abandoned it.

It is largely because of these two “C”s—Communism and Covid—that China’s economy is in crisis.  Buffet is undoubtedly aware that official statistics show the country’s growth has been cut in half—and the actual situation is undoubtedly far more dire.  The property sector is bust, banks are going belly up, and Chinese consumers are tightening their belts.  The Chinese economy is headed for a very hard landing, as political controls tighten and Covid lockdowns continue.

Even without these domestic political headwinds, Buffet is undoubtedly also factoring in recent U.S. actions that will further hamstring China’s technological and military advance.  Under the bipartisan CHIPS act, the U.S. has just imposed new export controls on semiconductor chips—not just those made domestically but those made anywhere in the world with U.S. equipment—that will make it much harder for China to successfully produce state-of-the-art electric vehicles, cell phones, or computers in the future.

Any such attack on Taiwan would dramatically speed up the decoupling of the U.S. and Chinese economies.  The outcome, if not Armageddon, would be to divide the world into two competing blocks, with the U.S. and Europe on one side, facing a hostile China-Russia axis on the other.  The value of Buffet’s investments in China would plummet.

Such sanctions, unseen since the days of the Cold War, raise the specter of open conflict, especially since they will also deny China the ability to import to chips manufactured in Taiwan.  If Xi wants the island’s chips, he will have to take the state-of-the-art chipmaking facilities by force.  His escalatory rhetoric and increasingly aggressive actions—recently sending drones and missiles over Taiwanese territory—suggests he is contemplating just that.

Even in the absence of open conflict, public sentiment in the West has already turned strongly against China.  It is not just that Beijing likely released a pandemic on the world, killing millions and causing trillions of dollars in economic damage.  The genocide of the Uyghurs, the crushing of a free Hong Kong and its support of the Russian invasion of Ukraine have all progressively hardened attitudes against China.  Some 82 percent of Americans now have a negative view of the East Asian giant, with anti-China sentiment running even higher in Australia and Japan.

The big box stores of America may still be packed with cheap Chinese goods, but those in the market for a big-ticket electric vehicle probably don’t want to support a genocidal regime that is openly hostile to America.  Add to this the growing anti-CCP sentiment in the US, and BYD may well find itself shut out of the American car market in the future, by consumer boycotts, if not by tariffs.

Warren Buffet has plenty of reasons to take his money and run.

And, as always, where Buffet leads, others will follow.

Steven W. Mosher is the President of the Population Research Institute and the author of The Politically Incorrect Guide to Pandemics.