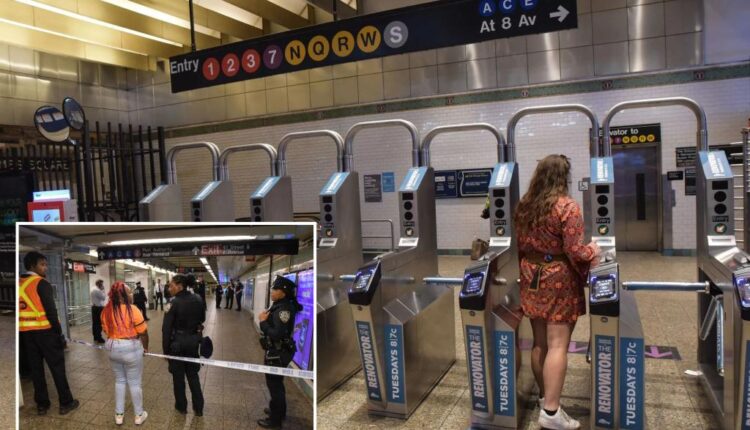 Another weekend, another spate of subway stabbings, almost unheard-of in the quarter-century before 2020.

To commit a stabbing or a shooting in the subway system, you need a knife or a gun. We know how to keep weapons and the people who use them out of transit — because we’re already doing it, and it’s working. It’s just that the scale of the problem has grown so much.

These latest attacks are just more reminders that serious subway crime, as of last week, is 42% above last year’s already-elevated levels.

One way to prevent people from carrying deadly weapons into the subway system is to stop them at the faregate.

New York has known for 30 years that knife- and gun-toters aren’t likely to pay their fares. Back then, Transit Police Chief Bill Bratton brought order to the subways by stopping criminals at the faregate. This philosophy helped bring annual subway murders from 26 in 1990 to an average of 1 to 2 a year from 1997 to 2019.

And we have fresh evidence this strategy still works. Twice in two days in late October, police stopped farebeaters at a Coney Island subway station — and found them carrying loaded guns.

On Oct. 18, police caught 23-year-old Kayvill Voliton entering without paying — and found he had a loaded pistol and was wanted for an earlier crime. And what do you know? A Brooklyn judge actually held him without bail.

A day later, police similarly caught 20-year-old Wilfredo Serrano walking into the same station through the exit gate without paying — and found a loaded .357. So far, Serrano is luckier than Voliton; despite being a person of interest in an earlier shooting, a judge set $20,000 bail, which he paid.

And late last week, cops caught a panhandler, 46-year-old Jermal Vives, suspected of having slashed a passenger at 50th Street and Broadway earlier this month after the victim ignored his request for money.

How did they catch him? Once again, this time in Washington Heights, he walked through the exit gate without paying his fare. Like Voliton, he’s now sitting at Rikers, on $1,001 bail.

How else do we know this type of police action in the subways works? This year, through Oct. 23, police have recovered 711 weapons from suspects in the subway system, most of them via stops for “minor” offenses such as farebeating. That’s 27 guns and 684 knives.

The numbers are way up from last year, when over the same time period police had recovered 359 weapons: 21 guns and 338 knives.

How is that? Because enforcement is way up. Through September, farebeating arrests in the subway system are nearly double last year’s level, and civil summonses for the same offense are up 34%.

But it is just not enough. More people are carrying weapons, in part because they themselves are fearful of violence, and the presence of these weapons can make a dispute deadly.

And after two years of near-nonexistent enforcement in 2020 and 2021, far more people are beating the fare — 12.5% of subway riders, as of early this year, up from 3.9% before the pandemic.

It’s simply harder for cops to stop everyone.

The Metropolitan Transportation Authority is so intent on halting this lawlessness that it has hired civilian, unarmed security guards at six key stations.

These guards can serve a purpose. Some people who just got used to riding without paying will think twice about brazen theft in front of watchful eyes.

But despite what progressive activists will tell you, the unarmed guards won’t replace cops. The guards won’t stop a farebeater who ignores their warnings, and they can’t arrest a suspect and then find that he is carrying a gun or a knife.

For that, we still need armed police — and a city and state government willing to keep repeat offenders out of the transit system, including through mandatory mental-health treatment for the seriously ill.