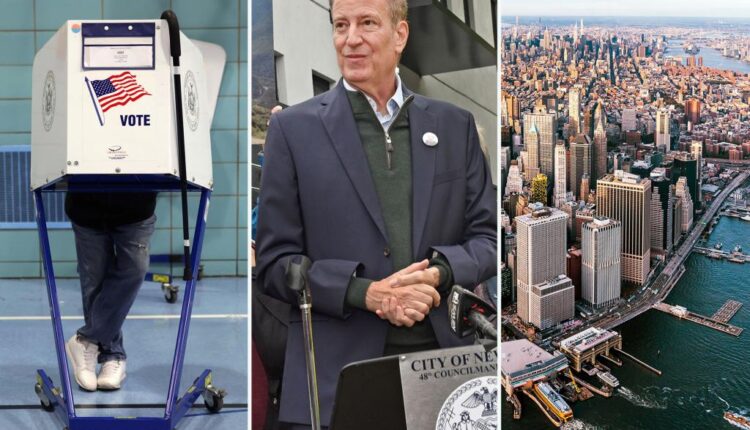 Life in New York is difficult. Why should voters make it worse by approving three corrosive — and potentially dangerous — changes to the City Charter on the Nov. 8 ballot?

The measures, a parting gift from a mayor who made almost everything in his city worse, would amend the charter — effectively New York City’s constitution — to embrace “racial justice and equity” as a “stated value” of municipal governance.

So what’s wrong with “equity,” who’s against it — and why?

New Yorkers have heard this song before, in 2019, when a “racial justice and equity” argument supported the state penal-code “reforms” now driving the city’s crime wave. Does anybody think a second chorus would be a good idea?

At the same time — and maybe this is the real point — approval would mean a bonanza for the city’s activist lawyers, lobbyists and race-mongering advantage-seekers.

A “racial justice and equity” commission Bill de Blasio established as his dubious mayoralty was ending advanced the proposals; at the very least, they represent endnotes to a legacy of decay and decline.

Unsurprisingly, more of the same is baked into the proposals. (The first proposal on the ballot is a separate, statewide one.)

So there’s the package. The proposals are interlocking, each meant to bolster the others, creating a platform for multi-layered mischief.

Again, New York has a history of this sort of thing. Allegations of race-based disparities in arrest, conviction and incarceration rates animated the 2019 penal-law changes — even though there was virtually no proof innocent or undeserving people were going to prison.

Thus is the word “equity” a polemical device, meant to deflect criticism when evidence of actual unfairness doesn’t exist. And in Question 3, it is used to support the notion that a proper role for government is to promote — if not compel — equal social outcomes. As opposed to opportunities.

In practical terms, Question 3 is an assault on the civil-service merit system — and, indeed, on merit-based government right across the board.

Each city agency would have its own “equity” sub-bureau; detailed goal-setting would be required — as would regular reporting of progress as defined by “equity” bureaucrats themselves.

The objective, again, is to use the force of law to erase race-based statistical “disparities.” No doubt some foolish people believe this is possible.

But it is not. Not in a dynamic, socially churning city of 8.4 million people. And even if it were, government-enforced race-based outcomes would stand on its head a foundational American principle: equality before the law.

Yes, that goal has been elusive too — devilishly so — but it has been driving social progress for two-plus centuries. Who really thinks a formal embrace of spoils-system politicking, inevitably driven by race, ethnicity, personal privilege and greed, is a good idea?

To be sure, the civil-service merit system is embedded in the state Constitution — but to the activists that sort of thing is just a challenge, not an impediment.

The activists also view racialized public education and municipal procurement as positives — never mind decades of experience to the contrary. And then there were the 2019 “equity”-driven penal-law changes.

Really, who wants more of that?

There is, to paraphrase New York’s greatest modern mayor, no racialized way to pick up the refuse — that is, to run a functional government and to ensure a safe city.

Fiorello La Guardia made the wheels turn. Bill de Blasio caused them to fall off. Adopting the latter’s “equity” nostrums as a template for the future makes no sense at all.

Dems scrambling to escape the political consequences of their disastrous policies