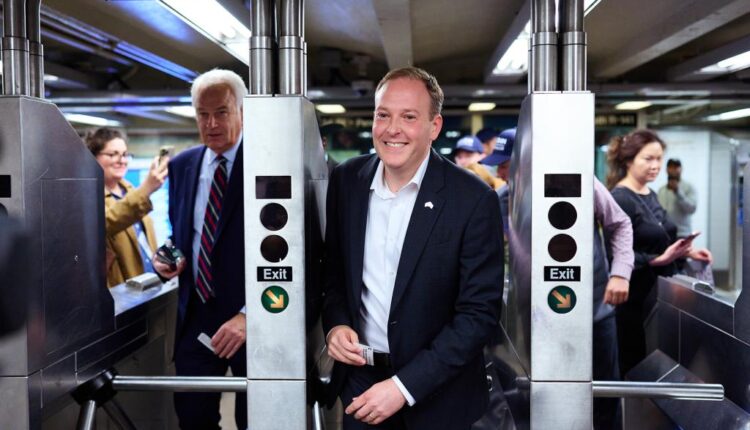 As early voting begins Saturday, New Yorkers have a critical chance to save their state — by casting their vote for REP. LEE ZELDIN, The Post’s choice for governor, and sending “Status Quo” Kathy Hochul packing.

We have suffered too long from:

Zeldin can make a huge difference.

First, he’s vowed to remove Manhattan District Attorney Alvin Bragg for refusing to do his job, picking and choosing the laws he deems worth enforcing.

Crime is out of control. As of Sunday, it’s up overall 30% from last year in the city. Transit crime’s up 42%; the past two years have seen as many transit murders (24) as during the previous 13 combined.

Zeldin himself was attacked while campaigning. And gunfire erupted outside his home while his daughters were inside doing homework.

Yet Hochul refuses to fix the criminal-justice laws — cashless bail, Raise the Age, Less Is More, etc. — to let judges lock up the bad guys and keep them locked up. She claims judges can’t be trusted to determine a defendant is too dangerous to release (though every other state has a “dangerousness” standard), so just let them all go free.

In the debate on Tuesday night, she couldn’t understand why locking up criminals is “important.”

Zeldin vows to declare a “crime emergency” to help the mayor get the restrictions changed.

Also telling: Zeldin tapped a veteran NYPD inspector, Alison Esposito, to be his lieutenant governor. Hochul, by contrast, last year chose ardent defund-the-police Dem Brian Benjamin as her No. 2 — until he was indicted on federal bribery charges.

Then there’s Hochul’s record of corruption — starting with the $637 million (of your money) she forked over to Charlie Tebele, whose handed her nearly $300,000 in campaign cash in a no-bid, no-scrutiny deal for him to provide COVID tests. New Yorkers wound up paying twice the per-test price what Californians paid.

She also set aside $1 billion (of your money) for a personal slush fund so she can shower presents on favored constituents. And she aims to use $1.2 billion (of your money) to provide tax breaks for a “Penn Station redevelopment” project (led by another big-time donor, Steve Roth) that doesn’t upgrade the station. Zeldin, by contrast, won’t even meet with donors who have business before the state.

And she’s still covering up for disgraced ex-Gov. Andrew Cuomo, dragging her feet on her promised investigation of his pandemic measures — especially his order to send COVID-positive patients to nursing homes with vulnerable seniors, and covering up the true number of COVID deaths at those facilities. Zeldin plans to tap a special prosecutor to look into that and other Cuomo scandals.

Meanwhile, Hochul’s squeezing taxpayers to the hilt — and still setting up the state for cash shortfalls in coming years. Last year, when Albany OK’d a $4 billion tax hike, Hochul blithely went along, refusing to undo the damage this year. Instead, she jacked up spending (of your money) to a mind-boggling $224 billion; that’s $37 billion, or 20%, more than just two years ago.

Zeldin would slash taxes and return money to New Yorkers.

As for schools, there’s a reason the teachers union backs Hochul: She’s its cat’s-paw. Proof? She won’t lift the cap on generally non-unionized public charter schools, particularly in the city, even though they often outperform traditional schools and tens of thousands of families remain on waiting lists — all because the union opposes them.

That leaves kids in terrible schools with no way out. And, no, those traditional schools aren’t terrible for lack of enough (of your) money: As the Citizens Budget Commission reports, state and local public-school outlays total a stunning $85 billion this year, nearly twice the national average per student. Yet New York schools fail to achieve “above-average results.”

Zeldin, by contrast, would expand charters, which could provide competition leading to better traditional schools. He also supports keeping options for gifted and talented students and a focus on core lessons over woke fads.

Zeldin would lift the ban, creating jobs and new sources of income for upstate New York — while adding to energy supplies.

Likewise, he’d ditch onerous business regulations, helping the state improve its ranking under Hochul as second-worst in the nation for business (after New Jersey), per the Tax Foundation.

This is a majority Democratic state, but even Democrats must realize that we need a check on the increasingly radical state legislature that is intent on pushing ideology over common sense.

New York simply can’t continue like this: surging crime, sky-high taxes, lousy schools, political corruption, an anti-business/anti-jobs climate. No wonder hundreds of thousands have fled these last few years. The good news: New Yorkers can change all that — by voting for Lee Zeldin.