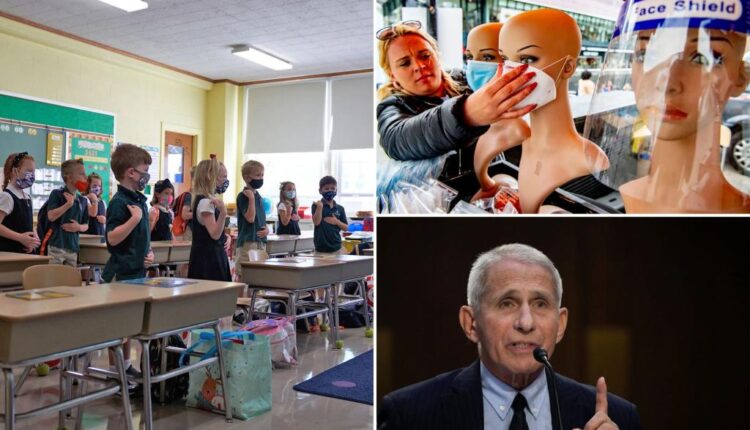 Is there anything masking can’t do? Except for control COVID spread, of course.

A new study in the New England Journal of Medicine purports to show that mask policies in schools work to contain COVID. But that’s not all: The authors conclude, “We believe that universal masking may be especially useful for mitigating effects of structural racism in schools, including potential deepening of educational inequities.”

Sure, masks help fix structural racism. Why not? And the next study will show masking fights climate change.

No, what this study shows is that much of the medical establishment continues to be intensely woke — and deeply dishonest because of it. Just as the “experts” told us gathering in crowds wasn’t OK in spring of 2020, but just weeks later protesting for Black Lives Matter somehow was.

This dishonesty is going to hurt us all for a long time.

As for this study specifically: It does not prove what the authors intended to. It’s just the latest in a push by agenda-driven scientists, and the media who love them, to get people back in masks.

The study centers on two Massachusetts school districts that didn’t remove their mask mandates as soon as the state allowed, in March 2022, but kept them until June. A few months later, they saw slightly lower COVID rates than the other districts.

It’s amazing that COVID could lay in wait like that, ready to punish those who behaved badly months earlier. What’s even more startling: COVID rates in all the schools were higher before anyone took off their mask — but that uncomfortable fact goes unmentioned in the write-up.

Plus, the study doesn’t look at actual mask use, just the mandates. Nor does it account for any differences in behavior, income level, lifestyles and so on. (Which also means it can’t show a thing about masks and “structural racism,” whatever that is anyway.)

Oh, and: It’s an “observational” study — the kind the left dismissed as irrelevant when we’d point out that New Mexico and next-door Utah had very similar COVID trajectories despite very different masking policies. Or that Europe largely didn’t mask kids in school at all but had similar or lower rates than we did. None of that counted.

Which didn’t stop The New York Times’ Roni Caryn Rabin from promoting the new study as “a so-called natural experiment” and breathlessly concluding, “The bottom line: Masking mandates were linked with significantly reduced numbers of Covid cases in schools.”

This is full-on nonsense. The mask mandates did no such thing. New Mexico-Utah and Europe are just part of the avalanche of “natural experiments” that prove it.

It’s pathetic that in November 2022, we have to keep pointing out the obvious — and that garbage science like this destroys everyone’s confidence in the medical field.

Pre-COVID, trusting the medical establishment was the default for all of us, most conservatives included. I’m firmly on the right, but when the health agencies told me in the early days of the pandemic that masking worked, I believed them.

Yet things quickly stopped making sense. Masking outside seemed ludicrous right off the bat, yet it would be a long time before these same health agencies admitted it.

Not until April 25, 2021, did Dr. Anthony Fauci say, “It’s common sense to know that the risk when you are outdoors, which we have been saying all along, is extremely low, and if you are vaccinated it’s even lower.”

He had not, actually, been saying that all along — and those of us who had that “common sense” got targeted and ridiculed for being “anti-science.”

It wasn’t that we stopped “believing” in masking. It’s that we were lied to and then realized it.

And “common sense” did not prevail at all in blue areas. My family moved to Florida in January 2022 because our kids were still forced to mask at their New York City public schools, outdoors.

These bonkers policies destroyed the trust of so many people, and it will be far more difficult than it seems to restore it.

No one is allowed to step out of the woke lines — though those lines are free to shift at any time. It’s very Soviet.

Under those rules, you can’t be critical of even this cockamamie study; you’re supposed to see that someone squiggled some lines on a graph and pretends it “proves” something it clearly doesn’t because you need to support your “side.”

Inside the woke echo chamber, you even have to embrace insane ideas like “masking fights racism.”

No one at the Times could write an article about how a study like this is gibberish. Medical professionals and journalists who point out the obvious, that the study makes no sense, will be quickly excommunicated.

It’s sick, and it has to stop. This isn’t science, it’s politics — and this woke cancer has to be fought until it’s defeated.