Unmitigated gall of Joe Biden claiming that he ‘lowered’ debt 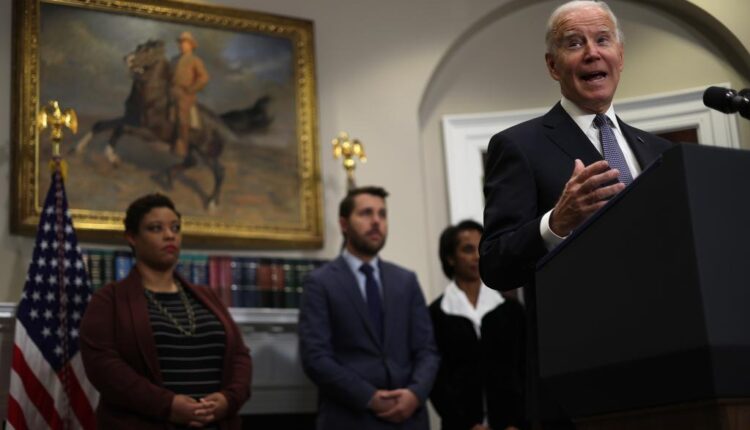 How should a president respond to running a $1.4 trillion budget deficit — 40% higher than before the pandemic — and adding trillions more to 10-year deficits?

If you are President Biden, you take a victory lap touting your “historic deficit reduction.”

In a remarkable feat of gaslighting, the president held a press conference Friday bragging about directing the “largest one-year [deficit] drop in American history.” But Biden did nothing to reduce the deficit. In fact, his policies have added a deluge of red ink.

Between 2017 and 2019, the budget deficit averaged $810 billion annually. The pandemic then put millions of people out of work and brought trillions of dollars in temporary federal benefits, pushing deficits past $3 trillion in 2020 and $2 trillion in 2021. As the pandemic receded, however, the expiration of this temporary spending was scheduled to return deficits to the pre-pandemic levels of $900 billion to $1 trillion for the next six years. Instead, Biden’s spending pushed up the 2022 deficit to $1.4 trillion — $400 billion higher than the baseline and far above pre-pandemic levels. And this was despite shattering peacetime records for tax revenues.

Yes, the deficit fell in 2022, because the temporary pandemic spending expired on schedule. That is not a presidential accomplishment. No one planned on trillions of dollars in Paycheck Protection Program loans, record unemployment benefits or COVID mitigation measures being necessary after the economy reopened.

By Biden’s standard, President Harry Truman is the greatest budget-cutter in American history simply because he was in office when World War II (and its military costs) ended.

Taking credit for 2022’s “largest one-year drop” in the deficit is especially galling when Biden himself drastically expanded the 2021 deficit with the $1.9 trillion American Rescue Plan, which is worsening inflation. He personally drove up the 2021 budget deficit and then bragged about his fiscal responsibility when that spending expired on schedule.

Sorry, you don’t win firefighting awards for putting out your own fire.

Here’s the reality. When Biden was inaugurated, the Congressional Budget Office forecast $14.5 trillion in deficits between 2021 and 2031. Now Washington is projected to borrow $19 trillion over that period. The president has added $4.8 trillion in 10-year deficits through policies such as the American Rescue Plan ($1.9 trillion), student-loan moratoria and bailouts ($750 billion), a large omnibus appropriations bill ($625 billion), infrastructure law ($370 billion), health and welfare expansions ($360 billion) and a veterans’ bill ($280 billion). The only law providing net savings was the Inflation Reduction Act ($240 billion), and that figure is inflated with gimmicks like fake expiration dates for spending intended to be permanent.

And while Biden and Democrats brag about reducing annual deficits from Trump’s levels, they rarely mention that half of his legislative costs arose from emergency pandemic bills that were drafted and passed by congressional Democrats. It is disingenuous for Democrats to take credit for massive pandemic aid and later dismiss those costs as “Republican deficits” while also treating those costs’ scheduled expiration as courageous deficit reduction while engaging in their own spending spree.

Then again, the same White House refused to acknowledge any role in gas prices surging an extra $2.33 per gallon but demands credit when prices dip $1 from that peak.

Biden just ran a budget deficit 40% higher than Trump’s pre-pandemic deficits. And he wants you to pat him on the back for it.

Brian Riedl is a senior fellow at the Manhattan Institute. Twitter: @Brian_Riedl

How to watch season two of Acapulco on Apple TV Plus

Is Joe trying to destroy US, Britain’s ‘political wasteland’ and other commentary