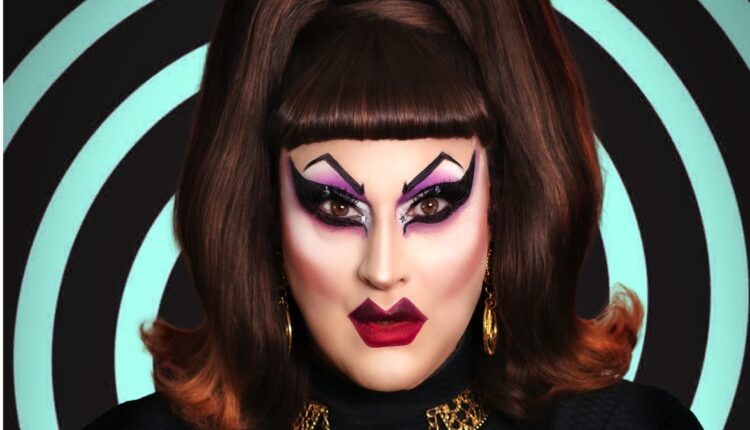 Drag legend Jackie Beat has been entertaining audiences around the world for 25 years with parody songs, stand-up comedy and unforgettable drag performances.

Her YouTube music videos have received millions of views, including her hilarious duet with Sherry Vine – a cover of a Sonny & Cher classic called “I Got U Bitch” and the Sir Mixx-A-Lot parody “Baby Got Front.”  An accomplished live performer, her one-woman show “Jackie Beat Is A Whole Lotta’ Love” ran a record 18 months at NYC’s premiere cabaret, Fez, and she returns to The Big Apple every year with her award-winning, standing-room-only holiday show as part of her sold-out national holiday tour. Her stand-up has been featured in comedy clubs across the country and on Comedy Central, VH-1 and MTV.

Jackie has also been in our living rooms and the big screen. She has appeared on many TV shows such as Sex and the City and in several movies including Flawless with Robert DeNiro, the festival hit Wigstock The Movie, alongside fellow drag legends including Lady Bunny and Leigh Bowery  and the camp cult horror favorite Gingerdead Man 3: Saturday Night Cleaver. Among her other accomplishments, Jackie has also been in many off-Broadway productions, performed on countless cruises ships, toured with Roseanne Barr as her opening act, enjoyed a sold-out 8-week run in Provincetown in summers past, and is the lead singer of the popular electro-rock band Dirty Sanchez, who toured with My Life With The Thrill Kill Kult.

Jackie is also a proud Writers Guild member who has worked on The WB sketch comedy show Hype!, the Sci-Fi Channel original series Tripping The Rift, and E! Television’s Fashion Police. Jackie has also lent her writing and has worked with Roseanne, The Office’s Kate Flannery and Drag Race judge Ross Mathews. Jackie has also written plays, including “Double Wide Female,” “Scream Teen Scream!” and “Whatever Happened To Busty Jane?” along with motion picture screenplays and TV pilots. Jackie has also contributed to countless magazines, was a regular columnist for Frontiers Magazine and one of US Magazine’s Fashion Police top cops.

Jackie’s latest project is the hilarious series, Dr. Jackie: Unlicensed Therapist. On the show, she helps out some of her funny friends work their way through their issues through role-playing, primal scream therapy, ink-blot tests and yes, even puppets. Some of Jackie’s celebrity patients include Margaret Cho, Cassandra “Elvira” Peterson and John Cameron Mitchell as well as some of the world’s top drag superstars including Alaska, Katya, Bianca Del Rio, Monét X Change, Sherry Vine, Tammie Brown & Kelly Mantle, Bendelacreme and Trixie Mattel.

We chatted with Jackie about her new series, her drag career and so much more in our exclusive interview. We also get her on the virtual couch and get to know her better as she answers the Socialite Seven. The doctor is in…and is incredibly funny!

How did you come up with the idea for “Dr. Jackie”?

I wanted to showcase the talents of my funny, fabulous friends. And I thought that campy therapy sessions with a self-centered, unqualified therapist like myself would be the perfect vehicle!

The show feels very improvisational and you worked with a lot of fellow funny people. Was there a lot of ad-libbing?

Yes, we shoot it in what I call “Christopher Guest style.” My understanding is that his films like Waiting For Guffman and Best In Show have loose structure and then the actors just go for it. Some scenes were more written than others, but there was always a predetermined beginning, plot twist, ending, etc. The hardest part of course was trying not to laugh because everyone is so funny!

How did you get so many fabulous guests on the show?

Honestly, I’m friends with all of them.

We shot 6 episodes in days so it was very fast and very streamlined and efficient. Each episode features an opening sitcom-style scene, a morning session, an emergency phone session, another sitcom-style scene, and then an afternoon session. That’s a lot! But we somehow got it all done. Sometimes you just have to believe in magic!

Who was the most fun to work with?

Everyone was amazing in their own way, but Bianca was probably the most fun. We literally couldn’t stop laughing. And her laugh is like sex with Sherry Vine: Very infectious!

Which celebrity or public figure do you think needs Dr. Jackie’s help the most?

Kanye? But that’s too real so let’s not go there.

It’s certainly nice to be appreciated, but I don’t actually think of it that way. I mean who calls themselves an icon? I’m just thrilled and so grateful to still be having fun and entertaining people.

How did you get your start?

I have always been a performer, even as a child. I was in drama in high school. But the first time I performed in drag was at an open mic night at a gay club in West Hollywood called Rage, which is now called Heart. I came up with my name that night over 30 years ago. The moment I heard people laughing I was hooked.

What defines comedy to you?

There’s no way to define comedy and that’s what makes it so special and elusive and mysterious. Something that I find hilarious may leave someone else just sitting there thinking, “That’s not funny.” I guess it’s like that famous phrase about obscenity: “I don’t know how to define it, but I know it when I see it!”

You’ve done drag, writing, music and comedy…what is most fulfilling for you?

I love all of it honestly. I love sitting in bed with my dogs writing – whether it’s for myself or another performer. But there’s nothing better than making a roomful of people laugh. I will say this: Drag is exhausting! By the time you are ready to walk onstage and give people what they paid for you have already spent hours getting ready. And the older I get, the harder and more painful it gets. But I still love it!

Is there anything you haven’t done yet that you still want to tackle?

I always thought I wanted to do a Broadway show, but the truth is I would probably get bored doing the same thing over and over and over again 8 times a week. I would love to be a series regular on a TV show! As long as it shot in Los Angeles and I could go home to my precious dogs every night.

What have been some of your proudest accomplishments?

I’ve written for Joan Rivers, been in a movie with Robert DeNiro and traveled all over the world but my proudest accomplishment is still simply making people laugh. It sounds corny, but it’s true.

What’s next for you?

A new episode of Dr. Jackie comes out every Monday on OUTtv and folks can see me in the Huluween Dragstravaganza variety show, which I also co-wrote, which starts streaming October 1 on Hulu. I am also working on lots of new material and traveling all over with my live show.

Who has been the biggest influence on you?

There are too many to pick just one, but they’re all women: Sandra Bernhard, Andrea Martin, Catherine O’Hara and so many other funny ladies.

What are three things you can’t live without?
My dogs, my bathtub, and coffee. Coffee is the responsible person’s cocaine.

It’s so stupid but I’ll never understand people who back into parking spaces. I mean, unless you’re robbing the place, what’s the point? And rudeness. Life is short, just be nice.

What talent or superpower would you like to wake up with in the morning?

I would love to be able to fly!

If you weren’t a performer, what career would you choose?

I would want to be an advertising executive – but back in the golden age like on Bewitched or Mad Men.

If they made a movie of your life, who would you want to play you on the big screen?

What’s the best piece of advice you’ve been given?

My teacher at Second City told me, “Your job is to have so much fun onstage that everyone in the audience wishes they were up there.”