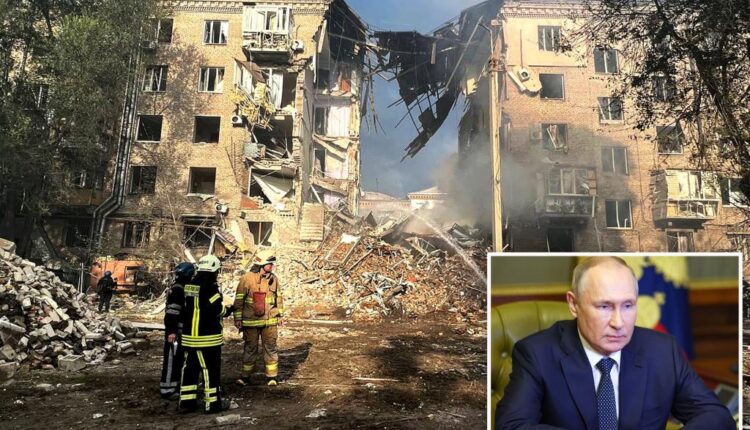 In 2019, the “Glass Bridge” opened in Kyiv. The structure is an elevated walkway with glass-bottomed segments, connected to one of the city’s hilly parks and offering stunning views to cyclists, runners and families on a weekend stroll.

In response to Ukraine’s successful attack on the Kerch bridge connecting the occupied Crimea with mainland Russia, a Russian missile — one of several exploding in Kyiv’s capital — almost hit the “Glass Bridge” Monday morning, exploding in a nearby wooded area. Harrowing footage a CCTV camera captured shows a lucky pedestrian escaping death only by a few feet.

Other targets hit in Kyiv the same morning included a children’s playground and a university. Across Ukrainian cities, the morning barrage of rockets left 11 dead and dozens injured. A day earlier, Russian artillery hit an apartment building in Zaporizhzhia, killing 13. Russian President Vladimir Putin pledged a continuation of this, to use his word, “brutal” response to Ukraine’s military successes. It fits a pattern that’s all too familiar. Incapable of winning the war on the battlefield, the Kremlin is trying to terrorize Ukrainian civilians into submission — much like Hamas and Hezbollah are trying to terrorize the Israelis and how the Nazis hoped they could reverse their looming defeat with the V-2 rockets targeting British cities.

It is not going to work. Instead of undermining morale, terrorism only strengthens the resolve of Ukrainians to chase out the invaders. It should also strengthen our own resolve to provide Ukrainians with the help they need: long-range and high-precision artillery, armor as well as state-of-the-art air and missile defenses.

In July, the administration pledged to provide Ukrainians with two National Advanced Surface-to-Air Missile System (NASAMS). Alas, unlike much of the other equipment, those had to be built rather than simply taken from existing stock. Earlier, Slovakia provided Ukraine with its own Soviet-made S-300 — in exchange for US-supplied Patriots. However, the escalation of Russian attacks on civilian targets in Ukraine underscores the need for more assistance, including the said Patriots — which the Ukrainians were publicly asking for in the past.

The West must not let itself be deterred by Russia’s nuclear threats. For one, and contrary to President Biden’s loose talk of a looming “Armageddon,” the risk is not of a strategic nuclear exchange between Russia and the United States. It is conceivable, though, that the Kremlin will decide to use a small battlefield nuke, or a number thereof, in Ukraine, in a Hail Mary maneuver aimed at breaking Ukrainian morale.

Doing so, however, would not solve any of Putin’s military problems. It would likely compound them as the Russian military almost certainly lacks the capability to operate in a nuclear environment without exposing its troops to toxic doses of radiation. Instead of breaking the Ukrainians into submission, it is bound to act as a catalyst both for Ukraine’s NATO-supported (or perhaps even NATO-led) conventional retaliation against targets inside Russia.

US allies in the region, including Poland and Finland, would inevitably seek to have US nuclear forces stationed on their own territories, and other countries — say, Kazakhstan and Azerbaijan — would face incentives to develop nuclear capabilities on their own. Even for Beijing, the association with Moscow would become too much of a liability to even consider any form of assistance to Putin.

As a result, while the contingency of a nuclear escalation in Ukraine is horrifying, it also one that would dramatically weaken Russia. Moreover, it is the Ukrainians, not us, who would bear the brunt of the costs and human toll of such an attack. If we are determined to stand with them, therefore, we ought to defer to their wishes rather than call for “negotiations” and “off-ramps,” which at this stage would inevitably involve condemning thousands of Ukrainians to live in tyranny and which would also mean postponing the war to a later date.

Unlike, say, Elon Musk, those living in the immediate vicinity of the war get it. The poised, no-nonsense attitude with which Finland’s 36-year old prime minister, Sanna Marin — a Social Democrat, no less — responded to the journalist asking about “a way out of the conflict” last week should be an example for all Americans equivocating or fretting about the supposedly provocative nature of our assistance to Ukraine.

“The way out of the conflict,” Marin said, “is for Russia to leave Ukraine.”

Yes, it is that simple and we can make it happen. And as Russia’s gratuitous acts of terrorism against Ukraine’s civilian population show, we also must.

Dalibor Rohac is a senior fellow at the American Enterprise Institute. Twitter: @DaliborRohac.

California makes it illegal for doctors to disagree with politicians