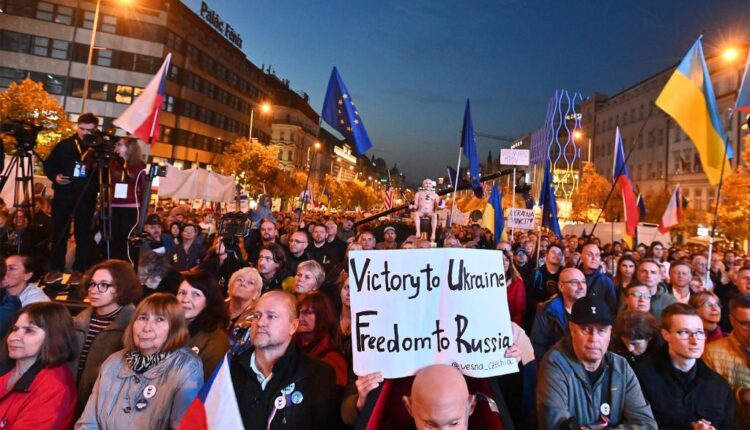 For people in Eastern Europe, reports of a deadly missile strike in Poland were gut-wrenching. Initial fears of an intentional Russian attack on a NATO member later appeared unfounded, but the tragedy brought home just how close to the war in Ukraine these countries are and highlighted the potential for fighting and destruction to spill beyond Ukraine’s borders.

Yet for those close by, the war has always been personal. It’s therefore no surprise that Poland and its neighbor the Czech Republic are among the world’s most generous contributors of military aid to Ukraine when measured against their resources. And their support continues despite growing public unease amid an economic downturn.

The Czechs have sent as much as 30% to 40% of their heavy weapons systems to Ukraine, with another deal announced this month to provide 90 Communist-era tanks from Prague, upgraded with help from the Pentagon. Last week brought an agreement for Czech-Ukrainian arms-industry co-operation, boosting the production of equipment for the present struggle while developing new technologies for the future.

Such commitment is all the more admirable given looming harsh economic circumstances. Inflation hit 18% in the Czech Republic in September and in Poland the next month. The Czech finance minister says the nation is already in a “mild recession,” while Polish economic growth has slowed to a crawl.

Yet both nations are doubling down in support of Ukraine. Petr Pavel, a former Czech Army chief of staff and the favorite to become Czech president in January elections, told me the Czech government has taken “a principled position from the start.”

From the moment Russia invaded, he says, “a large majority of our population was of the same opinion, that Russia is the clear aggressor and that we have to help Ukraine. With time, public support has diminished a little bit, but government support continues with no change.”

The government is being tested by a wave of protests calling for an end to support for Ukraine. Protestors argue that cutting off Russian energy supplies will impoverish ordinary people, and accuse Washington and Brussels of waging a proxy war with Russia to the detriment of Eastern Europeans.

Such views aren’t limited to Czechs; one recent survey suggested that over half of Slovaks want Russia to win the war, while Viktor Orbán’s government in Hungary has based its non-interventionist policy around similarly skeptical views of the Ukrainian cause.

At times, the Czech government’s distaste for the protesters has gone too far. Prime Minister Petr Fiala portrayed his critics as being “close to extremist positions,” while harsh statements from other ministers have made public opposition more embittered.

But Pavel believes protesters are being driven by misconceptions about the war. Many, he says, think the problem “isn’t Russia waging war against Ukraine, it’s us ‘provoking’ Russia. One man even told me that I am part of the problem, because if people like me weren’t pushing against Russia so much, Russia wouldn’t be so angry with us. But I never blamed the Russians for something that they didn’t do.”

“There are also those who try to convince the public that if we stop supporting Ukraine the war will end — and with an energy crisis and people struggling with their personal finances, such arguments can sound attractive. Of all the people protesting, I’m sure that only some are firmly pro-Russian. Many of them are simply dissatisfied with the way that the government communicates.”

Yet refusal to be swayed by such opposition is a testament to the strength of the Czech government’s principles. It is demanding enough to help protect another country when the going is good at home; it’s even harder when economic difficulties fuel public resentment. In this context, every victory for Ukraine — from the initial defense of Kyiv to the recent liberation of Kherson — has been vital in continuing to justify the sacrifices of its supporters.

Louder public criticisms about the West’s chosen path on Ukraine may be in store for other countries this winter. While the Czech government hasn’t gotten everything right in its approach to popular divides on the war, its determination to stick to its guns provides an example for others to follow.

William Nattrass is a British journalist based in Prague.