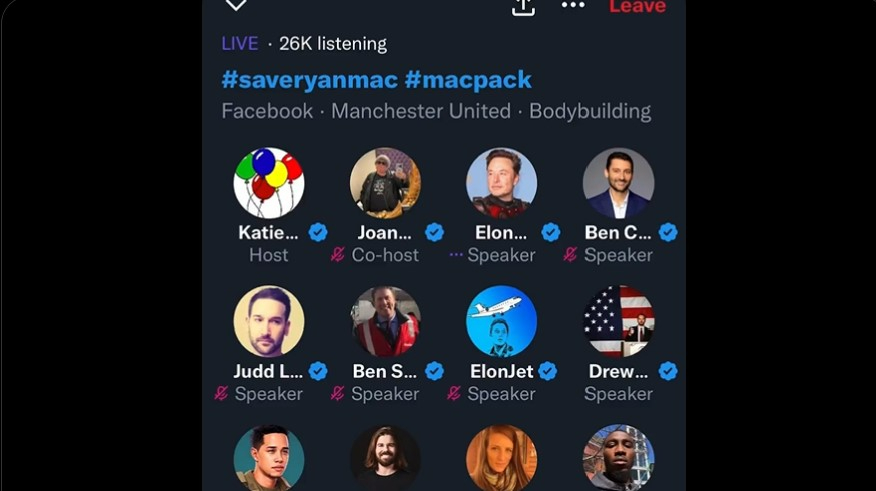 Overnight, Twitter decided to fix a “legacy bug” affecting its Twitter Spaces that saw the whole service go down. This happened to be during a massive call discussing Elon Musk’s decision to ban a bot that tracks his private jet and several high-profile journalists who reported on the story.

It’s sparked outcry on the platform following the controversial move. A lot has happened in a short space of time. Here’s a quick rundown.

There is (or should we say, was) an account on Twitter called ‘ElonJet’ which uses publicly available information to track the location of Elon Musk’s private jet. Many wondered whether this would draw some ire after Musk took over the platform. However, Musk tweeted on November 7 “My commitment to free speech extends even to not banning the account following my plane, even though that is a direct personal safety risk.”

Despite that initial stay of execution, the ElonJet account has now been suspended, causing an uproar over this obvious about-face. The personal account of Jack Sweeney, the mind behind the bot has also been banned. On December 15, Musk tweeted (opens in new tab) stating that “Any account doxxing real-time location info of anyone will be suspended, as it is a physical safety violation. This includes posting links to sites with real-time location info. Posting locations someone traveled to on a slightly delayed basis isn’t a safety problem, so is ok.”

In the aftermath of this development, several news outlets reported this story. Overnight, it then emerged that several high-profile journalists had been suspended from the platform. CNN’s, Donnie O’Sullivan, WaPo’s Drew Harwell, NYT’s Ryan Mac, and independent journalist Aaron Rupar have all been suspended from Twitter. The accounts boast more than a million followers collectively.

Musk claimed the “same doxxing rules apply to “journalists” as to everyone else” and said the accounts “posted my exact real-time location, basically assassination coordinates, in (obvious) direct violation of Twitter terms of service.” He later confirmed the suspension would last seven days.

A massive Twitter space popped up later that evening hosted by BuzzFeed News’ Katie Notopoulos, with a number of high-profile journalists and the ElonJet account in attendance to discuss the situation. The Space had some 26,000 attendees when Musk joined unexpectedly. As noted by Bradley Eversley: “Elon Musk just popped into a Twitter Spaces chat with a bunch of journalists. He was called out by journalist Drew Harrell, who he banned, for lying about posting links to his private information, then leaves almost immediately after being pressed.”

Holy Shit. Elon Musk just popped into a Twitter Spaces chat with a bunch of journalists. He was called out by journalist Drew Harrell, who he banned, for lying about posting links to his private information, then leaves almost immediately after being pressed. Here is the exchange pic.twitter.com/wVA9Gb5MVJDecember 16, 2022

While the Space was still ongoing, the whole service went offline, and Musk tweeted to state that Twitter had conveniently decided to fix “a legacy bug” late on Thursday evening shortly after the exchange.

At the time of publication, Twitter Spaces remains down at least on iOS. Twitter no longer has a communications department that can be approached for comment. The three affected news outlets all issued statements condemning the ban of its journalists. the Washington Post’s Executive Editor Sall Buzbee said the suspension “directly undermines Elon Musk’s claim that he intends to run Twitter as a platform dedicated to free speech” and called for Drew Harwell to be reinstated immediately.

An NYT spokesperson said the suspensions were “questionable and unfortunate”, and CNN said the move was concerning but not surprising, stating it had asked Twitter for an explanation and would reevaluate its relationship “based on that response.”

Twitter remains something of an enigma since Musk took over, with a series of massive sweeping changes to features such as verification and content moderation, closely followed by some u-turns. The Elonjet saga remains a developing story.