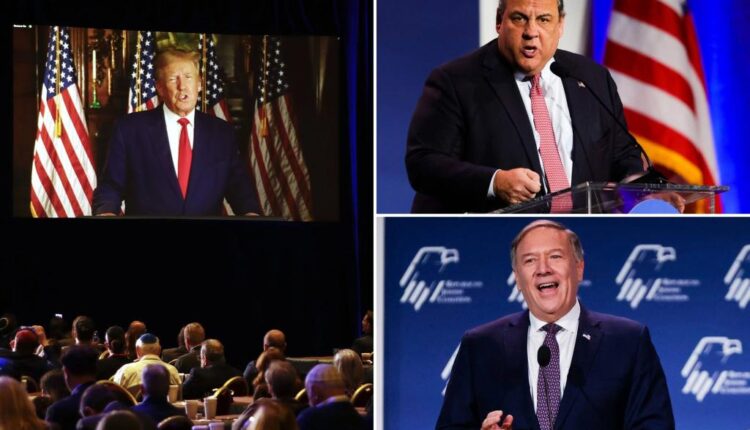 LAS VEGAS — Donald Trump was a magnet for very public criticism during the unofficial kickoff to the Republican presidential primary as activists and potential competitors for the 2024 nomination assailed the former president for leading the party to significant losses in three consecutive elections.

Each offered a packed convention-center ballroom a preview of a possible White House bid, excoriating President Joe Biden and promising national renewal after a Republican is inaugurated in 2025. But of greater interest, and potential consequence, were the attacks on Trump by some of the keynote speakers — though not all — just days after he launched his 2024 campaign. Much of the criticism centered around Trump’s role in the GOP’s midterm underperformance, on the heels of disappointing finishes in 2018 and 2020.

“But the fact of the matter is since that night in 2016, politically as a party, we’ve done nothing but lose,” Christie added with his trademark bluntness. The former New Jersey governor, who ran for president six years ago, plans to decide on a 2024 bid within five to six months.

Despite Biden’s low job approval ratings and high voter anxiety about inflation and crime, Democrats held their Senate majority — and could even gain a seat with Georgia’s Dec. 6 runoff — flipped two governor’s mansions and kept their House losses low. Republicans won the House majority but have a razor-thin advantage. Many Republicans blame Trump, citing flawed candidates who won primaries on the strength of his endorsement and faulting him for driving independent voters toward the Democrats.

Not all who expressed frustration with Trump were as direct as Christie (and Hogan, who also lit into the former president). Some, like Pompeo and Haley, offered subtle, albeit unmistakable, critiques of the 45th president’s leadership of the party while calling for a changing of the guard.

Pompeo used his speech to dispel his image as the former president’s most loyal Cabinet official. “This loyalty, this work that we must do together, is not to a person. This loyalty that I executed, alongside Vice President Pence for four years, was to our nation,” he said. “I did every day everything that I could to honor and be loyal to the oath that I took when I raised my right hand to defend the country. It wasn’t a loyalty to a person or a party or faction.”

Haley, who at one point declared she wouldn’t run for president if Trump mounted a 2024 campaign, confirmed to the crowd she’s considering a bid — another sign Republicans see the former president as a weakened figure.

“After the midterms, I’m more determined than ever to fight with everything I’ve got to bring strength back to our country,” said Haley, the former ambassador to the United Nations. “A lot of people have asked if I’m going to run for president. Now that the midterms are over, I’ll look at it in a serious way.” She added, “I’ve never lost an election, and I’m not going to start now.”

Trump himself addressed the conference, but via satellite from Mar-a-Lago, his Palm Beach, Fla., residence and private social club.

The Republican Jewish Coalition appreciates the former prez for a foreign-policy record that includes moving the US embassy in Israel from Tel Aviv to Jerusalem, negotiating the Abraham Accords peace treaties between Israel and some of its Arab neighbors and pulling America out of the Iran deal President Barack Obama negotiated. Trump received an enthusiastic welcome during a question-and-answer session with coalition leaders.

But whenever Trump raised one of his favorite topics — unsubstantiated claims the 2020 election was stolen — he was met with silence. “We had a very disgraceful election,” he said. “Many millions of votes more than we had in 2016, as all of you know. And the result was a disgrace, in my opinion. An absolute sham and a disgrace.”

David M. Drucker is a Washington Examiner senior correspondent and author of “In Trump’s Shadow: The Battle for 2024 and the Future of the GOP.”

‘Mr. Do Nothing’ Eric Adams deserves credit for taking on NYC rats