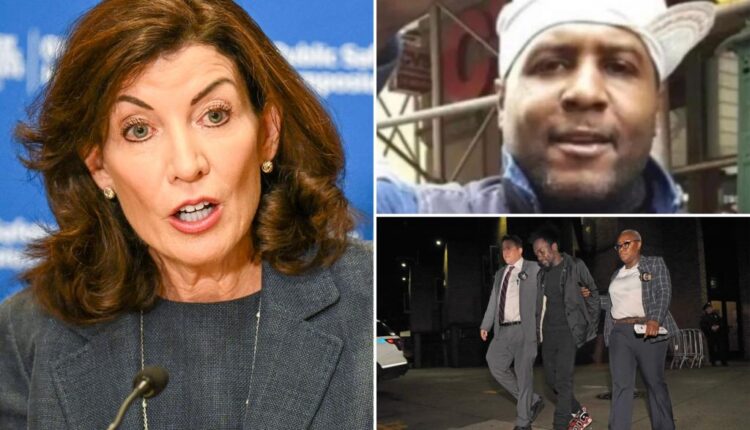 The senseless death of Tommy Bailey proves it: Anyone who votes for Gov. Kathy Hochul on Nov. 8 doesn’t get to complain about crime anywhere in the state.

Bailey, a father of three, was murdered at an L train station in late September — allegedly by Alvin Charles, who had been arrested for a non-fatal subway stabbing last year and released under the state’s absurd criminal-justice “reforms.”

That is, he got sprung to commit the same crime, this time with a fatal but utterly avoidable result.

If New York hadn’t succumbed to the activist left on no-bail, Raise the Age and every other crime-driving policy, Tommy Bailey and many other victims would still be alive.

And the governor refuses to admit this reality, pretending that a few meaningless tweaks to the laws fixed everything. So Bailey’s death, and the entire the tide of violence rising across her state, lies at Hochul’s feet.

She also owns the heinous acts by others who clearly should not have been sprung. Like Waheed Foster, who was let free under state reforms after violating parole and went on to allegedly beat Elisabeth Gomes within an inch of her life in a Queens subway station in late September. Or Rafael Saavedra, who allegedly murdered a man in cold blood in April after he was let skate on a November 2021 gun charge. Or the others now too hideously numerous to name.

Hochul knows she’s guilty, knows she has no real exculpation. That’s why her best defense, so far, has been It’s not my fault! She’s tried to shift the blame for these abominations onto judges (who are obliged to follow the law, no matter how foolish it is).

She even had the gall to suggest in August that we wait to “see whether or not the system can start functioning the way we intended” as she took any changes off the table until she gets elected — holding the lives of the public she allegedly serves hostage to her own political ambitions.

Sunday brought a shooting right outside the home of Hochul’s challenger, Rep. Lee Zeldin. We can’t say if the perps were more “second chancers” — but he’s on point in saying “Like many New Yorkers, crime has literally made it to our front door.”

The buck stops with Hochul. So if you don’t pull the lever for Zeldin this November, you’re voting for slaughter to continue.

Gov’t idiocy at work, FDA’s dumb plan on smokes and other commentary