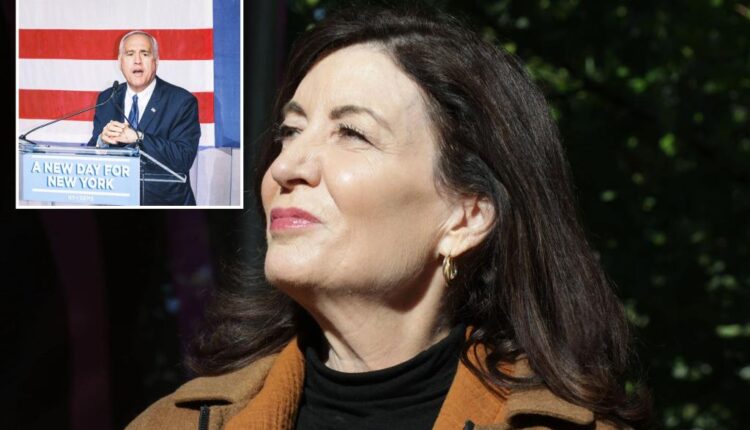 State Comptroller Tom DiNapoli isn’t looking to unseat his fellow Democrat, Gov. Kathy Hochul. But he just blasted her pay-to-play shenanigans, if not in so many words.

In an interview with New York NOW, the state comptroller cites “questions” about “vendors who got a contract approval [and] gave money, political money” — clearly referring to shady deals Hochul pushed through, bypassing normal checks and balances, after continually extending her pandemic “state of emergency.”

It’s “fair to question” how long the COVID emergency should have remained, he said. And “even at the peak of the emergency,” contract reviews by his office “could have added value.”

And while it’s “not illegal” for a “vendor to make a political contribution,” he added, “it just isn’t right.” Yes, the gov isn’t the only pol who takes such donations, but “it’s a valid concern. The appearance is as important as anything else.”

Actually, in Hochul’s case, it’s far worse than a mere “appearance” of wrongdoing: A no-bid, $637 million contract for COVID tests — which her team awarded, using “emergency” powers, to a donor whose family coughed up nearly $300,000 in donations — wound up costing New Yorkers almost twice as much per-unit as California paid for the same tests.

DiNapoli backs legislation to ban anyone seeking a contract with the state from making political contributions for a fixed period. Hochul, natch, refuses to say if she supports it.

The comptroller likewise noted “some cases of corruption” after Gov. Andrew Cuomo, some years ago, had him legislatively stripped of his ability to review contracts in advance. Though a memorandum of understanding restored that role, it came with caveats, DiNapoli’s office says — and no assurance it’ll remain in place.

The fiscal watchdog is urging Hochul to sign a bill to permanently return his full oversight powers: “It would be the strongest signal that . . . the page has turned” on corruption, he says. Yet Hochul refuses to send that signal by signing the bill into law before the November election. Expect the worst.

By contrast, her opponent Rep. Lee Zeldin vows to do things differently — barring himself, for example, from meeting with any donor with business before the state. Not coincidentally, special-interest “giving” has helped her outraise him 10 to one. The choice for any voter who cares about corruption is obvious.

Loose lips lead to lawsuits over allegations from ‘The Godfather’ set