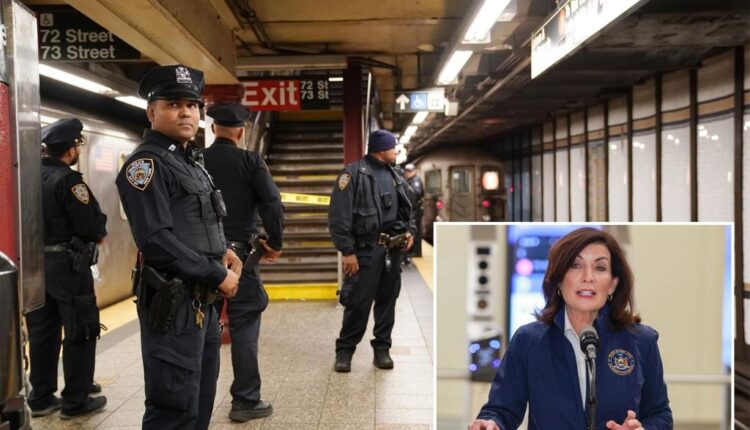 After four subway murders in 17 days, Mayor Eric Adams and Gov. Kathy Hochul will surge the number of cops in the transit system, directing 1,200 more officers daily to spend more time on platforms and trains. It’s a massive display of presence, and it’s useful now as it may save someone’s life. But make no mistake: This initiative is born of short-term political panic and is not a long-term policy plan.

This surge has nothing to do with the violent crime numbers underground, which have been horrific. Rather, it involves a different measurement: the polls.

Hochul wanted nothing to do with soaring subway murders in recent weeks. She left it up to her opponent in next month’s election, Republican Lee Zeldin, to repeatedly show up at the scenes of random homicides and near-homicides to direct some attention to the crisis.

Until Friday — when a poll showed her and Zeldin in a dead-heat tie.

So Saturday came the jointly announced Adams-Hochul subway plan. What are the details?

First, remember that Hochul and Adams have twice before announced subway-safety plans, first in January, when Adams took office, and again in February.

Those plans mostly relied on social services. It is excellent that 410 people have taken up the offer of shelter, but the initiative did nothing to cut violence.

One good thing about the new plan is that it takes serious mental illness far more seriously, assigning 50 new psychiatric beds, half of them in November. Good.

On paper, transit-police headcount is 2,730, and the separate state-run MTA police force has a budget for 1,446, for a total of 4,176. Since not everyone works at once, a surge of 1,200 daily extra shifts, borne by both transit and regular above-ground police, would be a big deal.

But it’s impossible to keep up. Even with the state paying part of the cost, it’s just a question of manpower.

People can’t work around the clock, and when they do, they don’t do a good job. In 2021, as violence (including the stabbing murder of two homeless people) grew on the subway, then-Mayor Bill de Blasio added 250 cops to the subways — but they quickly melted away.

Third, what are the cops supposed to be doing — and do we know if it’s working?

We know cops are giving out more civil summonses for farebeating and the like than they were in 2019 — 57% more in September — yet crime remains elevated.

Part of this is because arrests are still down — 3% lower than in 2019 in September, with arrests specifically for farebeating down 17%.

Problem is, without the threat of arrests, civil summonses aren’t worth much; half of people don’t pay their farebeating fines.

And we have no idea how many times the cops stop a farebeater and find that person also carrying a weapon or wanted for an earlier crime. In the early 1990s, then-Transit Police Chief Bill Bratton used to report this data regularly. There’s no reason the NYPD can’t do so now.

Fourth, in addition to better data, we need faster data. October is three-fourths over; we shouldn’t only be getting September’s monthly data on transit felonies just this past weekend.

The NYPD’s CompStat does report transit crime weekly. But it lumps crimes all together — all are up 12% over the past 28 days compared with last year — leaving us with no indication of the seriousness. A murder is different from a larceny. (Of course, we can count for ourselves the four recent murders from the news stories.)

Finally, we need to know: What does the state plan to do with repeat criminals who are arrested over and over for transit crimes and then released over and over?

Hochul has said nothing about why the alleged killer of Tommy Bailey on a Brooklyn subway last month had been freed on no bail for an earlier attempted subway killing.

Similarly, the alleged attacker of Elizabeth Gomez in a Queens subway station, causing her partial vision loss, was free on both no-cash bail and parole.

In the meanwhile, enjoy the extra cops on the subway: They will keep you safer. Just remember they’re there because the governor is afraid, too — for her own re-election prospects.