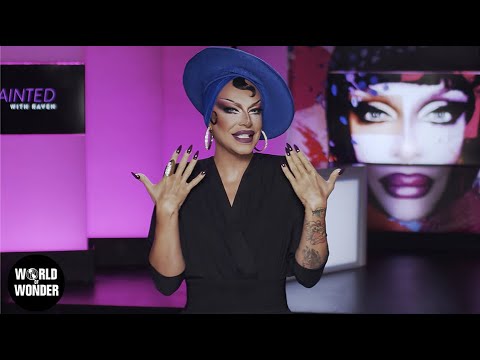 Hello, hello, hello! Welcome to our weekly wrap-up of all things drag.

This week, we see the return of Raven, as she mentors up-and-coming makeup artists and we hit the worldwide runway with returning favorites from around the globe. In addition, we have an impactful new track from Bob the Drag Queen, makeup chat with Jaymes and Trixie and a fresh set of beatdowns from Willam.

We’ve got more charisma, uniqueness, nerve and talent than you can handle, so leet’s bring it to the runway!

Painted with Raven season 2 premieres Thursday, November 17 on WOW Presents Plus. The series brings together makeup artists from across the US to compete virtually from the comfort of their own homes in a series of mini-challenges, main challenges and weekly face-offs. Among this season’s challenges, the artists must change their inner 70s glam rockers, celebrity look-a-likes and zodiac signs The program features a unique competition format with no eliminations, with contestants instead competing each week to accrue points through the challenges. This season will see an exciting rotating door of guest judges including RuPaul, beauty guru Patrick Starrr and season one winner Crimsyn (a/k/a Matt Perkins). Can you handle the glam?

Bob the Drag Queen released a fierce new track called “Black.” About the song, Bob says, “Myself and Mitch (Ferrino) were working on BLACK together and it’s a song that’s about being black. Then I thought that I definitely needed a black ear on the song, so I reached out to Ocean and they took it over from there and finished the song” – “I’m so proud of this song!” – “I cried the first time I watched this video, I went through a journey and I spent a lot to make it happen. Not just cost-wise, but also energy and also I was so excited to have a majority black crew. So I’m so so proud of this video.“ – “I got to work with Ocean Kelly again, and Basit who is an amazing, phenomenal artist. I met them through Instagram, and just by way of living in New York. Beautiful voice, bodacious booty! If you watch the video for one thing, watch it for their booty haha” – “It feels like a celebration of being black and queer, and not worrying about how we’re perceived by other people.” – “I feel like growing up blackness and queerness was through the straight male gaze. And if I was going to black and gay, it had to be defiant. But this is just about existing, and it involves black queer people being in charge.”

On last week’s episode of RuPaul’s Drag Race UK, Michelle Visage took charge as Ru, due to “circumstances beyond anyone’s control” and couldn’t be on the judges’ panel. Michelle filled in as head judge, with Raven’s taking her place, the eternally delightful Graham Norton and guest judge Boy George. The queens were tasked into transforming the “queen team” – the women who work behind the scenes magic – into their own family members. Get all of the tea from this episode from the “Binge Queens” – Crystal Methyd, Daya Betty, Jiggly Caliente and Silky Nutmeg Ganache. Watch the full episode on WOW Presents Plus.

Yuhua Hamasaki and Icesis Couture give us their takes on the UK runway looks on “Bootleg Opinions.”

Sadly, we had to say ta-ta to the fabulous Dakota Schiffer, who talks about her time own the show with Tia Kofi on “Tea Time.”

Dakota dishes with Yshee Black and doles out the superlatives to her fellow queens on “Drag Race Yearbook.”

Season 13 sensation Kandy Muse invites us into her home and talks fashion on the latest episode of “Out of the Closet.”

Willam is back with another hilarious “Beatdown”. This time around, she takes on a woman who has A LOT to get off her chest and showcases the incredibly talented Rhea Litre.

Get ready with Trixie Mattel and be as jealous as II am of all of her new PR makeup.

Jaymes Mansfield is back to share her wig wizardry talents as teaches you how to create rock-solid hair.

Peppermint joins Bob and Monét on the latest episode of “Sibling Rivalry.”

Bob and Monét revisit the All Stars 7 “Gives Back” variety show challenge (a/k/a the episode where Monet blew us away with her opera performance) on “Sibling Watchery.”

Laganja Estranga is back with another unboxing video. I will keep asking until II get an answer…how can I get on these PR lists?

On the latest episode of “No Gorge,” Violet and Gottmik discuss Daylight Savings Time, Twitter and other current events.

And that’s it for this week’s news. I am off to Las Vegas (and yes, I am seeing RuPaul’s Drag Race Live), so the Week win Drag is taking a week off. We will be back in 2 weeks with more from the queens. Until we meet again, stay healthy, stay safe and say LOVE!