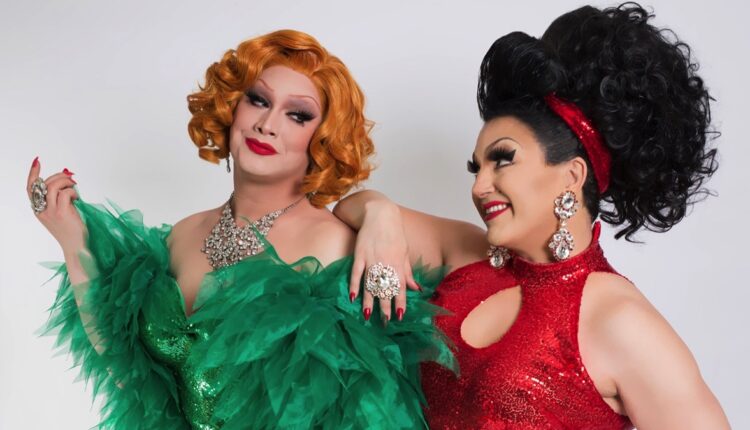 Hello, hello, hello! Welcome to another wrap-up of videos, updates, reviews and fun from the RuPaul’s Drag Race universe.

This week, we dissect the Snatch Game performance and pink runway looks from Drag Race UK and get the inside scoop from last week’s eliminated queen. We also meet the queens and mentors on the season two premiere of Call Me Mother and get a sneak peek at BenDeLaCreme and Jinkx Monsoon’s upcoming holiday tour.

And, as always, we check in with some of our favorite content-creating queens, including Jaymes, Rock, Yuhua, Trixie, Bob and Monét. We’ve got lots to get to, so let’s bring it to the runway!

In case you missed the season two premiere of Call Me Mother, the YouTube gods have smiled down on us. Watch as Drag Mothers Miss Peppermint, Crystal and Barbada preside over a battle royale with 15 new, dynamite drag talents serving raw fashion, choreo, comedy and a ferocious drive to be adopted by one legendary Mother. New episodes of Call Me Mother drop each Wednesday on OUTtv.

BenDeLaCreme and Jinkx Monsoon are coming back to town with the wildly successful, internationally acclaimed The Jinkx & DeLa Holiday Show (Produced by BenDeLaCreme Presents). The tour will run from November 11 – December 30 across the U.K, U.S. and Canada with a new show written by Jinkx & DeLa that proves why they’re still the reigning “queens of Christmas”

BenDeLaCreme says, “The Jinkx & DeLa Holiday Show is joyous, hilarious, surrealist, communal, and heartwarming. Nothing makes me feel more connected to the good in the world than the seas of people we get to celebrate the season with night after night–laughing, cheering, and being in our feelings together. I’m so lucky to get to experience that each year, and I hope you all will experience it with us.”  Jinkx adds, “The Jinkx & DeLa Holiday Show will take everything you expect from a drag queen variety show, and spin it on its side. It will test the limits of stupidity, while being unexpectedly deep and reflective. We strive for entertainment while always proving that the holidays are for you to celebrate however you want to.”

As the duo prepares to kick off their tour, they just released a hopeful and classic holiday ballad, “Looking at the Lights” available on all streaming platforms via BenDeLaCreme Presents Records. Written by BenDeLaCreme, composed by Major Scales and performed by Jinkx Monsoon, the song debuted in the 2021 holiday tour which beautifully (and hilariously) explores the effects the pandemic had on our mental health, and how the “joy” of the holidays felt different than before.

DeLa says, “‘Looking at the Lights’ is the first song I’ve ever written that’s just earnest and didn’t break itself with a joke. It’s a true holiday song about friendship and community, and how even in the darkest of times, we still have each other. I wrote it as a way to process all my feelings of trauma, grief and anxiety in the pandemic. When we were working on the show last year, it had all the campiness, jokes and parodies our audiences love but it was still missing something that truly acknowledged what we had all gone through. This song became the climax of the show, and hearing Jinkx sing it for the first time absolutely floored me. As someone who’s always struggled with the holidays, this is more than just a song about pandemic loneliness. It’s timeless and always relatable.”

Jinkx adds, “First of all, it’s such an honor when two of your brilliantly talented friends [BenDeLaCreme and Major Scales] make a song for you and ask you to sing it. When DeLa and I first heard the composition by Major, we had mutual goosebumps. It’s become one of my absolute favorite songs to perform, and even more special knowing how audiences connect with it. I’m excited for fans who got to see the show last year to add this studio recording to their holiday playlists.”

Stream “Looking at the Lights” here and get tickets for the Jinkx and DeLa Holiday Show here.

On last week’s episode of Drag Race UK, the queens brought out their best (?) celebrity impersonations for the fan-favorite “Snatch Game” and brought pink-hued fashions to the runway. Watch along with Pangina Heals and Blair St. Clair (along with Naysha Lopez, Batty Davis, and Kara Mel D’Ville) at Chicago’s own Roscoe’s.

The “Binge Queens” also had a lot to say about the episode. Do you agree our disagree with Crystal Methyd, Daya Betty, Jiggly Caliente and Silky Nutmeg Ganache? Check out this sneak peek and watch the whole episode on WOW Presents Plus.

Yuhua Hamasaki and Bosco discuss the “Tickled Pink” looks from the DRUK runway on “Bootleg Opinions.”

Even though she made an adorable Mario Kondo on “Snatch Game”, we had to say “Cheerio” to the lovely Le Fil. Tia Kofi talks to her about her elimination and her experience on Drag Race UK on the latest ‘Tea Time.”

Yshee Black also gets Le Fit to spill a little tea about her time on the show as well as dole out the superlatives to there fellow queens on “Drag Race Yearbook.”

Season three winner (and all-around icon) Raja takes us into her closet and talks about fashion, creativity and more. She shows off some of her finest looks (including some amazing shoes) and talks about her love of caftans, getting older, and embracing gray hair. And she’s  just fabulous while doing so.

Get to know more about the deliciously talented Kornbread and her unique fashion sense as she comes “Out of the Closet” as this popular web series returns.

Halloween may be over, but we have a few last treats from the queens to hopefully tide you over until next spooky season. Daya Betty transforms into the iconic Frank N. Furter from Rocky Horror Picture Show and answers fan questions in this video that will have you shivering with antici…pation.

Not to be outdone, Bosco brings the murderous Tiffany from Bride of Chucky to life, while sharing some insights into their own life by answering fan questions.

Willam shows us how to create a slightly fright-inducing take on Mickey Mouse in this two-part tutorial. We also get a chance to hit the town with the icon herself.

Rock M Sakura wraps up “Rocktober” with an anxiety-inducing game of ‘What’s in the Box?” with Erika Klash from Dragula Titans.

Trixie Mattel is the queen of makeup, but what happens when she needs a quick fix? Watch as she dives into her emergency travel makeup kit (which has nicer products than my non-emergency makeup collection.)

On the latest episode of “Sibling Watchery”,  Bob and Monét take us back to Episode 10 of All Stars Season 7 as the queens take the stage to roast each other at the first-ever Kennedy Davenport Center “Hall of Shade” Honors.

Jaymes Mansfield brings us another in her “Iconic Blondes” wig transformation series. This time, she gives us a Guess Jeans era Anna Nicole Smith look (which I absolutely love.)

And that’s all for this week. Until we meet again, stay healthy, stay safe and say LOVE!