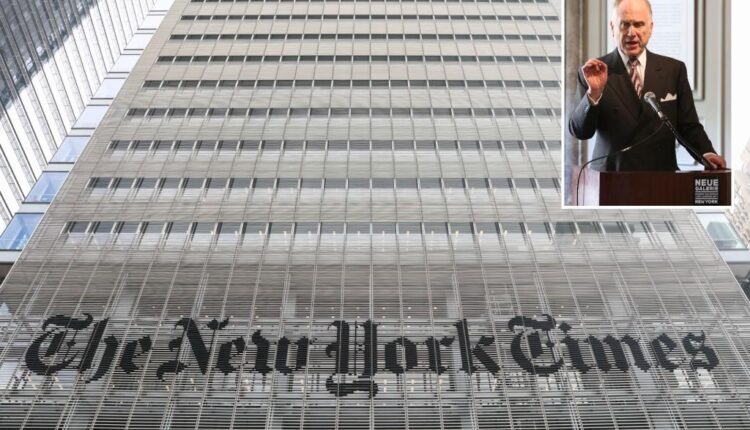 Gov. Kathy Hochul may lose Tuesday despite Democrats’ overwhelming edge in voter registration, and The New York Times is desperately trying to figure out how the world turned upside-down. Its latest villain: Gazillionaire Ron Lauder, who had the gall big-time to donate to independent committees supporting challenger Lee Zeldin.

After all, it can’t be crime fears (and Hochul’s refusal to do anything about them except to denounce the “conspiracy” to scare voters) that’s leveled the field, even though that and inflation are voters’ top issues.

Yes, Lauder’s $11 million in giving has helped bring pro-Zeldin forces to near-financial-parity with Hochul in the closing weeks. And, yes, he’s also a key funder of the litigation that led the courts to annul Dems’ “Hochulmander” scheme.

That effort aimed to stack the deck for their House and state Senate candidates this year, in direct defiance of the voters’ repeated insistence that districts be drawn in a non-partisan process. Lauder’s support simply allowed justice and the public will to win out over Dems’ insider dealing, as even the state’s Democrat-dominated top court agreed.

And how absurd to scream over one rich guy’s spending, when George Soros has spent at least $125 million this cycle, not to mention other Dem billionaires like Tom Steyer and Mike Bloomberg. (Nor that Dems outdid Republicans in “dark money” fundraising in the last cycle.)

All Lauder did was level the field against a candidate who amassed an unprecedented $50-plus million warchest in less than a year after inheriting the governership — by focusing from the start on pay-to-play fundraising, rather than on New Yorkers’ vital needs. And she never stopped, pulling in big “gifts” from the likes of the Dolan family (Madison Square Garden) and the Draftkings CEO in recent weeks.

Indeed, Lauder cites as his overriding concern the need to save New York from permanent one-party status. His past giving matches that theme, from his support for term limits in the city to his defense of nonpartisan redistricting.

And, by the way, he’s worried about crime, too, as a dire threat to the city he loves.

We’re not sure if the Times is hoping its smear of Lauder pushes Hochul over the top (again, the best polls for Zeldin only show a tie), or if it’s already starting to build a narrative for insisting a Zeldin win won’t be legitimate; probably both.

But if the paper’s goal was still to publish “all the news that’s fit to print,” wouldn’t it have run at least one story on last week’s horrifically brutal West Side rape, allegedly by a perp with a long rap sheet?