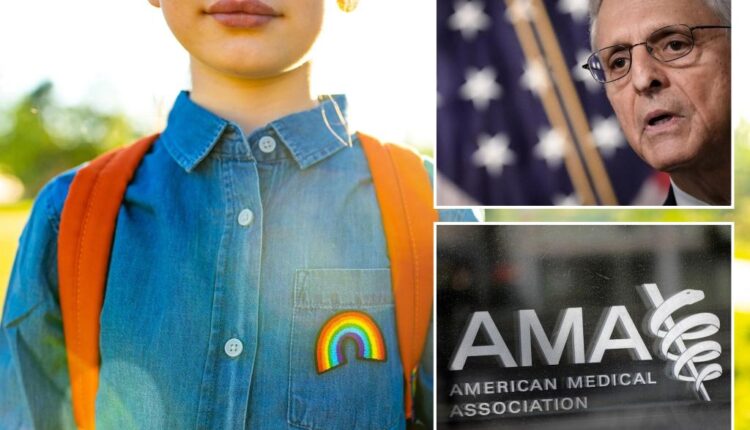 If its appeal for state-Big Tech action against critics is any indication, the woke medical establishment not only seeks to encourage interventions up to the mutilation of children’s bodies but with it the mutilation of Americans’ free-speech rights in service of its lucrative “gender-affirming care” enterprise.

The American Medical Association, joined by the American Academy of Pediatrics and the Children’s Hospital Association, recently delivered a letter to US Attorney General Merrick Garland calling for him to unleash the Justice Department on foes of efforts to transition children.

In so doing, the AMA et al. took a page out of the notorious National School Board Association playbook. The play goes like this: When journalists and activists expose an institution’s radical positions, spurring a damaging backlash, claim that the costly revelations constitute disinformation, that the disinformation is inciting dangerous acts, and that therefore public and private authorities ought to pursue the “disinformers.”

The play is made more effective when the authorities to whom the institution is appealing are already on the institution’s side, as was the case with the NSBA and the Biden administration.

The AMA and its co-signers made their play by arguing that the doctors they represent and the facilities where the doctors work are facing “coordinated attacks threaten[ing] federally protected rights to health care for patients and their families. The attacks are rooted in an intentional campaign of disinformation, where a few high-profile users on social media share false and misleading information targeting individual physicians and hospitals, resulting in a rapid escalation of threats, harassment, and disruption of care across multiple jurisdictions.”

Therefore, the parties added, “Our organizations have called on technology companies to do more to prevent this practice on digital platforms, and we now urge your office to take swift action to investigate and prosecute all organizations, individuals, and entities responsible.”

Wisely, unlike the NSBA, the medical organizations were vaguer about the threats their members and medical facilities are purportedly facing and the extent of the gender-affirming jihad they want the government to launch against critics.

The drafters referenced a single bomb threat, noted that children’s hospitals have been beefing up security, and said that social media threats and other “harassing” communications, along with “protestors at health care sites,” are creating an “elevated and justifiable fear among families, patients, and staff.” Unlike the NSBA, they did not cite a list of specific threatening acts that when examined would fall apart, undermining their argument. Less specificity makes it harder to scrutinize the claims.

Any credible threats or acts of violence should of course be pursued by authorities, but the content of the letter and the history of the groups making appeals to a Justice Department that has targeted dissenters from ruling-class orthodoxy — of which gender-affirming is a burgeoning component — certainly call into question the claims’ legitimacy.

The AMA likewise neither invoked the Patriot Act nor called on a slew of other national-security offices to pursue critics, as the NSBA had done, shrewdly making the letter marginally less inflammatory.

But the message delivered to both a Biden administration already so committed to “gender-affirming care” for youth that it has taken its case global while at home harassing the likes of youth gender-alteration opponent Eagle Forum and like-minded, censorious Big Tech was clear.

With Americans averse to the growing, Biden administration-backed, often educator-and-doctor-supported push for gender-dysphoric children to transition — even behind their parents’ backs — despite the dubiousness of the science behind the treatments, let alone matters of parental rights and their children’s competence to make such irremediable decisions, the long-term consequences and the underlying ethics involved, the ruling class must intimidate critics into silence and submission.

We must not be allowed to call into question any aspect of radical gender ideology, just as we must not be permitted to question the integrity of our elections, our ruling regime’s COVID-19 policies, critical-race-theory indoctrination in schools, or myriad other third-rail topics.

Those who would dare do so, whether conservative commentators like Matt Walsh or mirror-holder to leftist gender radicalism Libs of TikTok, political-activist organizations like the aforementioned Eagle Forum, or everyday parents right and left aghast at the push of developing children away from their sex through treatments up to and including administering puberty blockers, hormones, and genitalia surgeries, are to be threatened not just with deplatforming but with the full force of the law. And that law, as we have seen recently with abortion and many other issues, is applied anything but equal.

At a minimum, by publicly disclosing this letter to law enforcement and Big Tech, the medical establishment is putting its opponents on notice.

Whether, as with the NSBA, it coordinated with the Biden administration in the run-up to the letter’s delivery and how the Biden Justice Department will respond are yet to be seen.

Regardless, there are three major takeaways here.

First, this episode reveals that no matter how contentious the issue and sacrosanct the matter — all the way down to altering the bodies of children — progressively inclined organizations will seek to collude with the government and “private”-sector auxiliaries to punish dissenters, free speech be damned, in pursuit of their radical agenda. In fact, the more contentious and sacrosanct the matter, the more likely such institutions may be to sic the full power of the regime on their foes.

Second, this episode shines a light on just how devoted the state and medical establishment are to encouraging gender transitions for children. There are likely some true believers among both groups in the medical and moral merits of “gender-affirming care.”

But there are obviously some cynical motives at work, too: For those in government, the push to transition kids can create a wedge between parents and children to be exploited. It also challenges human biology and normalizes that challenge. That those in the medical establishment seek to collude with the state and Big Tech betrays a base desire simply to protect what has been exposed as a profitable, if sordid, business.

Third, this episode represents still another illustration of science’s capture by woke ideology and the imperative to impose woke-captured science tenets by stamping out dissent. During the pandemic, we saw the push to racially ration COVID-19 treatments. We also saw efforts to quash dissenting views on everything from the disease’s origin to the efficacy of masks, vaccines, and outpatient treatments and now have leading medical schools embracing courses on “medical misinformation.”

Now we see the AMA et al. seeking to deputize the Department of Justice and Big Tech to police “disinformation” — challenges to its gender-affirming orthodoxy — on one of the most highly contentious and highly dubious treatment/procedure sets anyone could imagine. Science of course demands openly grappling with competing views. Suppressing them — the aim of the AMA et al. letter to the DOJ — is fatal to science and ultimately to us.

Meanwhile, the fusion of public and private power centers to target political opponents is the textbook definition of fascism. Yet those who call it out are cast as “semi-fascists” and threatened with the ruling class’ punishment. Who will stand up for those forgotten Americans under siege?

Ben Weingarten is a senior fellow at the London Center for Policy Research, a fellow at the Claremont Institute, and senior contributor to The Federalist. From Newsweek.