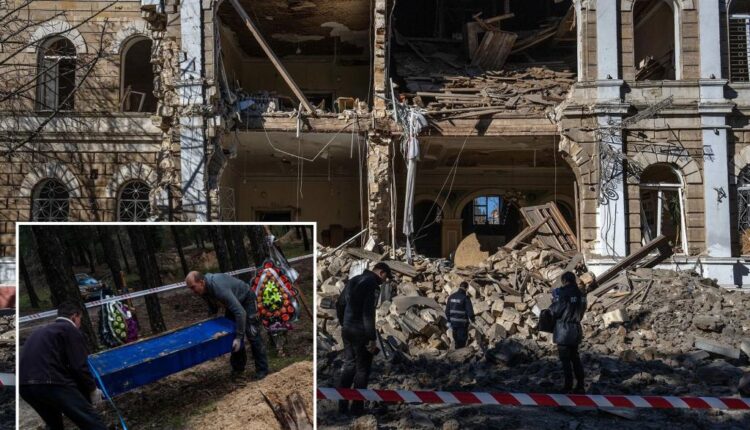 Vladimir Putin’s “strategy” for winning his war on Ukraine now boils down to inflicting enough misery on civilians that Kyiv comes begging for peace. It won’t work (“bomb them into submission” never has), not least because every week brings fresh evidence of his forces’ war crimes dating back to the start of the invasion in February.

Ukrainian President Volodymyr Zelensky reports that Russian strikes have “seriously damaged 40%” of Ukraine’s energy infrastructure ahead of the coming winter. Moscow has also targeted the water supply as well as schools, day-care centers and residential blocks.

Russian authorities vehemently deny targeting civilians, but then again they claimed for months that their goal was “de-Nazification” (Zelensky is a Jew) — though more recently they switched to insisting they’re after Satanists who supposedly control the country.

Most recently, Ukraine’s National Police uncovered 34 sites in newly-liberated areas that hold evidence of Russian torture of civilians. That comes atop prior evidence (and testimony) of such war crimes as rape and mass executions. Not to mention all the Ukrainians, especially children, kidnapped back to Russia.

iStories, an organization of independent Russian journalists who fled the country for their own safety, interviewed a Russian soldier who confessed to looting, torturing and executing a civilian on orders from his unit commander in the Kyiv suburb of Andrivka in March.

New York state’s Environmental Conservation Commissioner Basil Seggos, who took a leave to deliver donated ambulances, couldn’t help noting how Putin had taken a “buzzsaw” to Ukraine. “I think the damage of the environment was part of the intent — to shell the landscape, to shell the infrastructure and basically make it uninhabitable,” he told The Post.

In the West, parts of the left and the right are longing for an end to the Ukraine war. But Putin has yet to show any sign he’s willing to compromise: He’s still putting all hopes on terror. And the only possible answer to that is to keep backing Ukraine to the hilt.

The week in whoppers: Biden’s ‘intimidation’ nonsense, the NYT’s biased scaremongering and more