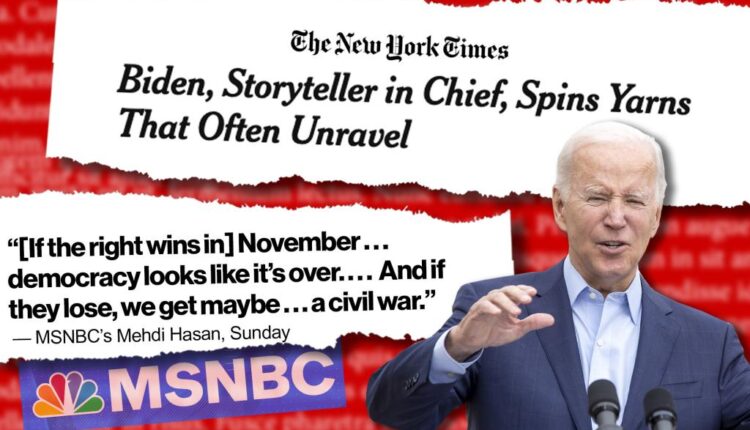 We say: “Storyteller” who “spins yarns”? C’mon, man — the guy’s a pathological liar. Just this week, he falsely claimed he lost his son in Iraq. Who gets a fact like that (about his own son!) wrong? In truth, the Times piece is more of a defense of President Biden’s serial deceptions (and a slam at Donald Trump, who’s portrayed far worse) than a critical report on his mendacity. There’s no mention at all, for example, of his most serious lies: Inflation is “transitory.” Build Back Better costs $0. No, when it comes to honesty, the Gray Lady’s no better than Biden himself.

We say: Blogger and ex-Bloomberg columnist Noah Smith delivers a whopper two-fer: His first lie: suggesting claims “the country burned” in 2020 are to be taken literally. His second: that violence erupted in “just a small handful of neighborhoods.” Smith himself admits a full 220 cities saw violence. As many as 14,000 people were arrested by the end of June alone; property damage reached as much as $2 billion. Yes, that’s a small percentage of cities, people and property. But despite Smith’s claims, the percentages are irrelevant; at least metaphorically, the country was indeed “burning.”

We say: In the eyes of unhinged leftists, Republicans will destroy America — whether they win or lose. Hasan predicts “fascism” if the right takes Congress in November (does he even know what fascism is?), and civil war if not, even though there’s no evidence at all for a “war.” (And no: unarmed, fur-clad crackpots in the Capitol on Jan. 6 are not evidence of looming, right-wing-sparked civil war.)

“I don’t think there will be a recession. If it is, it’ll be a very slight recession.” — President Biden, Tuesday

We say: Given Biden’s record of misstatements (see above), this might be the strongest sign yet a deep recession’s around the corner. Beyond that, The Conference Board predicts a 96% chance of recession in the next 12 months; more than eight in 10 economists polled by Bankrate say the chances of a contraction are 50% or more; one put it at 100%. Actually, per the traditional definition (two straight quarters of negative growth), the recession’s already here.