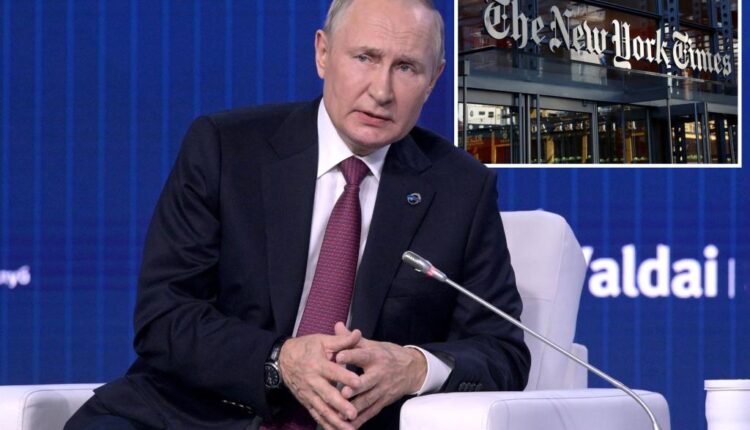 Last week, The New York Times noted that Russian President Vladimir Putin was trying to appeal to American conservatives in his war against Ukraine.

The news article said Putin’s recent keynote address at the annual Valdai conference was “aimed at winning over political conservatives” in the United States and Europe. As evidence, the authors cited Putin’s claim that there are “two Wests” — one of “traditional, mainly Christian values” with which Russians feel kinship, and “another West — aggressive, cosmopolitan, neocolonial, acting as the weapon of the neoliberal elite” that tries impose its “peculiar” values on the rest of the world.

But in fact, Putin touched upon many facets of American life and politics during his three-hour manifesto and lengthy Q&A, which covered a lot of ground. He pandered to various US ethnic groups and their traditional roots — Latinos, Asians, Africans, Middle Easterners, and others — and insisted that their cultures and civilizations have value that’s no lesser than Western liberal norms. He even tried to woo environmentalists by saying climate change has been pushed off the agenda to the “second tier.”

It is unclear why the Times ignored all this and focused on Putin’s love of traditional, Christian Americans in the story, headlined “Putin Rails Against ‘Western Elites’ in Speech Aimed at U.S. Conservatives.” Perhaps, editors decided, this particular angle would most excite their liberal readers. And if that’s the case, the Times unwittingly played right into Putin’s hands just days before the midterm elections.

Election interference is a standard tool in Putin’s Playbook that Moscow uses as a matter of strategy. Intelligence shows the Russians targeted Americans in the last three elections — in 2016, 2018, and 2020 — and almost certainly are doing it today, as we are poised to head to the polls on Nov. 8.

Putin’s goal is not to elect a specific person or party — the Kremlin knows that it has no such power. What the Russian government wants is to build distrust of the US itself and foment disarray, discord and disorder. Russian intelligence services run cyber-enabled covert operations, with the help of social media, to stoke or amplify ideological and political polarization among Americans.

But Putin especially likes it when certain outlets like the Times use his comments to serve their own agendas.

This is not the first time the New York Times has unknowingly done Putin’s bidding, dividing Americans while targeting conservatives.

In April, it ran a hit piece titled “The G.O.P.’s ‘Putin Wing’,” which alleged that an influential part of the “Republican elites” feel an affinity for Putin, blaming former President Trump for it. The piece also accused Fox News, Tucker Carlson, Georgia Rep. Marjorie Taylor Greene, the Koch Industries, JD Vance, and other Republicans for allegedly promoting Putin’s narratives. It blamed them for asking questions about Ukraine’s role in US security, criticizing the corruption of the Ukrainian government, and making a tongue-in-cheek suggestion that the US could use Putin to help us defend our Southern Border.

Ironically, The New York Times is guilty of the very thing they accuse Republicans of — serving as Putin’s mouthpiece.

On September 11, 2013, the paper ran an editorial by the “former” KGB spymaster himself, titled “A Plea for Caution From Russia” with the byline Vladimir V. Putin.

In it, Putin spoke “directly to the American people and their political leaders,” making a case against a missile strike on Syria that former President Obama was considering as punishment for Bashar Al Assad’s use of chemical weapons against his own citizens.

A highly skilled propagandist, Putin pushed all the right buttons to save his buddy Assad from a US missile strike. He pointed to the US and Russia having been allies in the past, fighting the Nazis together. He invoked the supreme role of the United Nations in making war and peace decisions, arguing they should only happen “by consensus,” and worried about more civilian casualties.

Appealing directly to President Obama, Putin even mentioned his pet-project, the Iranian nuclear program and the possibility of the “multilateral efforts” to resolve it being undermined.

All of this was a covert influence operation run brilliantly by Putin himself, targeting Obama and his decision-making. And it worked. Obama backed out of enforcing his own “red line,” thanks to the New York Times, which served as the Kremlin’s megaphone — and a clever tool in Putin’s playbook.