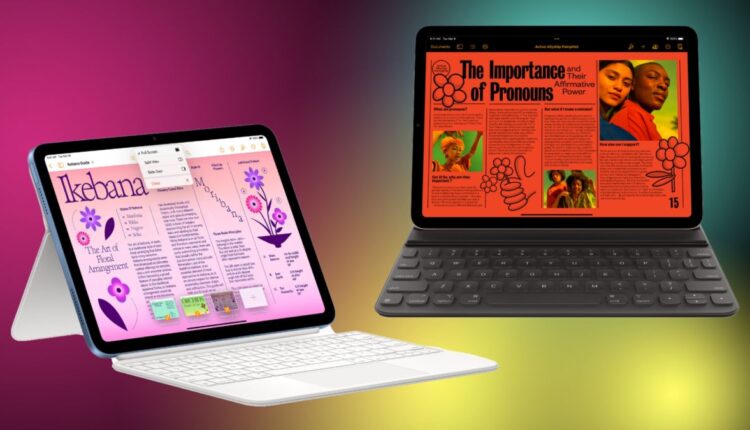 I’ve always been a big fan of the standard iPad, and the value it offers users at its price point always made it an excellent device to have on your coffee table, in your office, or traveling alongside you in a bag.

As the lineup of iPads grew to include the iPad Pro (opens in new tab)and iPad Air (opens in new tab), Apple’s intention of having an iPad for everyone out there solidified. The iPad Pro is the best and most powerful, the iPad Air was powerful but missing key “pro” features, and the standard iPad was for the budget-conscious or people who need a larger screen to read, play games, watch movies, browse the web, or anything else. Today, though, Apple decided to burn that all to the ground and stop giving anyone a reason to buy the iPad Air.

The 10th-gen iPad stole everything good from the Air

Before today, when you compared the iPad Air to the standard iPad, the most significant things that stuck out were the design, the color options, the USB-C port, and the lack of a Home button. It was distinctly different from the iPad.

The new 10th-gen iPad now looks nearly identical to the iPad Air. Its updated design removes the Home button and puts its Touch ID sensor in the power button. The vibrant blue, pink, and yellow hues adorn the iPad (2022) and look fun, fresh, and less dreary than the slightly more muted tones of the iPad Air. The Lightning port has been swapped out for a USB-C port, meaning it now has access to better accessories, faster charging, and better data transfer speeds. This used to be the iPad Air’s claim to fame, but now the iPad (2022) has it and is cheaper.

Don’t forget the new iPad has some upgrades, too.

Along with the 10th-gen iPad’s new design has come with a significant upgrade by changing the front-facing camera placement to be along the side instead of the top of the iPad. This will make voice chats with friends, family, and coworkers much better as you’ll be looking toward the camera.

The new camera placement is only on the new iPad and not on iPad Air and iPad Pro don’t have, including the new M2 iPad Pro (opens in new tab) that was just announced. A surprisingly odd choice for Apple, especially when both models launch on the same day.

Most of you expect me to say the M1 chip that powers the iPad Air, but processors are often over-hyped. I have an iPad Air 5 and a 9th-gen iPad with the A13 Bionic in it, and I have used them both extensively. I rarely notice the difference in processing power when doing my day-to-day tasks, and most people won’t.

You have to push the limits of the A13 to get it to chug, and the A14 in the 10th-gen iPad will be even a little better. Unless you need to do some serious computing on your iPad, I don’t think the M1 in the iPad Air is that big of a deal.

So if not the chip, then what? The screen.

The 10th gen iPad still doesn’t have a laminated display. That familiar hollow sound when tapping your iPad screen will still be there, and I was hoping the standard iPad would get rid of that with a redesign. Plus, the iPad Air 5 also has an anti-reflective coating, which does make it noticeably better to use in bright light.

If Apple wants to keep the iPad Air around, the next iteration has got to offer a lot more.

It’s hard to imagine what that would be, considering it’s already so close to the iPad Pro, but the $449 price point of the 10th-gen has taken the wind out of my love for the iPad Air.

I suppose now is the time to await the iPad Air 6 eagerly.