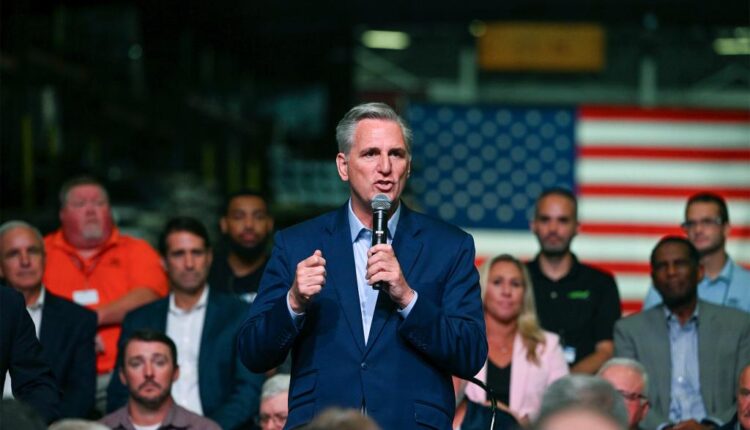 House Republican leaders have announced a plan they are calling a “Commitment to America” in time for the November election and presumably the presidential contest two years from now.

In unveiling the plan, House Minority Leader Kevin McCarthy (R-Calif.) has the party’s priorities right. The question is whether the Republican Party can survive the familiar and expected Democratic and media onslaught we have seen before, the one that claims the GOP will end Social Security and Medicare and harm children.

The Commitment to America plan promises to reduce government spending — the main driver of debt that accompanies record-high inflation — control the southern border and the migrants and drugs pouring in, as well as attack violent crime. These issues have worked well for Republicans in the past. The problem has been sustaining them against opposition from Democrats, much of the media and interest groups that would later be characterized as “the swamp.”

It would be helpful if McCarthy and his colleagues would tell us which government programs they will cut, but perhaps they don’t wish to telegraph anything to prevent Democrats from mischaracterizing the plan. Not that they won’t anyway.

In this “sequel” to the Newt Gingrich (R-Ga.) and Dick Armey (R-Texas) “Contract with America,” Republicans are again promoting some of the same ideas that created their first House majority in 40 years. The 1994 contract had many things going for it, but chief among them was everyone could understand it. The contract contained 10 promises and was reduced to the size of a full-page ad in the then widely distributed TV Guide magazine. Voters could also carry copies in their wallets and purses.

Not all of the contract’s objectives were achieved, including congressional term limits and a constitutional amendment to force balanced budgets, but those that did were astoundingly successful.

While Democrats screamed like scalded dogs and promoted doomsday scenarios, President Bill Clinton correctly gauged the mood of the country, declaring, “The era of big government is over.” If only.

The Clinton-Gingrich welfare-reform bill was a major achievement of the contract. The left claimed poor people would starve. They didn’t. Most of the able-bodied among them found jobs, which benefited them and the country.

Taxes were cut, and in 1998 the federal budget was balanced and stayed balanced through 2001. Hard as it is to believe with today’s $30 trillion debt, the country experienced a surplus of $236 billion in 2000.

For three straight years — from 1997 through 1999 — the economy produced more than 3 million jobs, a record.

It is undeniable that the contract worked.

The new list of Republican goals will work, too, if they are implemented, because they are rooted in the history of what has worked before — lower taxes, less spending, personal responsibility and accountability, empowering parents, not teachers unions.

President Joe Biden is no Bill Clinton. The Democratic Party has been taken over by the hard left, and it’s not about to compromise on anything, from social issues to climate change.

Only if Republicans win Congress and the White House does the GOP “Commitment to America” have a chance to fully succeed. As in 1994, the party has the issues on its side — from previously mentioned inflation and a declining stock market that is hurting the savings of retirees to an uncontrolled border, violent crime and a cultural fabric that seems to many conservatives to be coming apart.

If Republicans can’t win on these issues, they can expect and deserve to be committed by voters to years of irrelevancy.

If Hochul really wanted to crusade against fraud, she’d be ordering an investigation into herself