The GOP can’t dump Trump — but Republican voters can 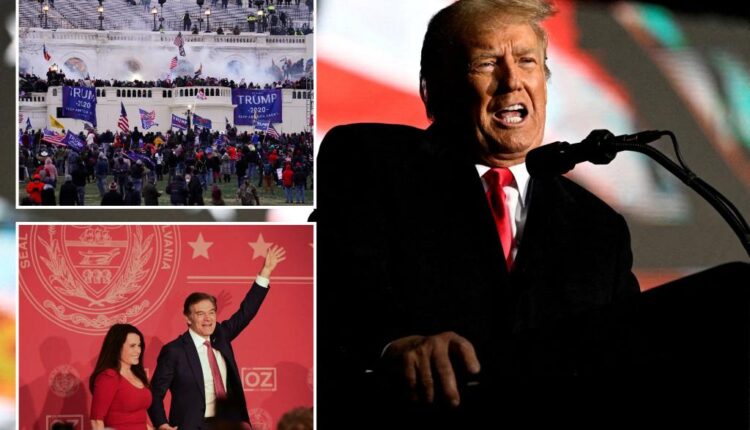 Donald Trump is in his weakest political state since 2015 or early 2016.

During his presidency, when he was at the center of countless intense controversies, he didn’t blink once. He never showed fear or desperation. Both are clearly at work now in his gratuitous attacks on Ron DeSantis and Glenn Youngkin, neither of whom has done anything to him, besides presenting a viable alternative to his continued dominance of the GOP.

Any Trump political obituaries are premature, though, until a verdict has been reached by the force that has buoyed him and lent him his overwhelming power in GOP politics — Republican voters.

The idea that the “party decides” — that a party’s elites guide voters to their preferred presidential candidate — got blown to smithereens in 2016. Trump had almost no institutional support and won anyway.

Since then, the party has neutered itself and in many states been affirmatively taken over by pro-Trump forces.

After the “Access Hollywood” tape and Jan. 6 experiences, Republican officials have internalized the lesson that getting too far out in front of voters in expressing anti-Trump sentiment — indeed getting an inch in front of them — is potentially fatal.

Politics is always a realm of artifice and whispered conversations, but the Trump era has taken it to another level in the GOP. Many of the elected officials who are Trump’s biggest public boosters have a dim view of him in private. People serving at the highest levels of his administration — not Deep State operatives but his own political appointees — would make clear their discomfort with him in private. Even the most pro-Trump voices in the media often don’t share their true feelings about him.

If the window has opened a crack to Trump criticism among Republican officialdom, it’s still quite muted. Everyone considers it much safer to train their public fire on Kevin McCarthy or Mitch McConnell.

It’s important to remember, by the way, that some of the worst candidate choices in the midterms were freely made by GOP primary electorates under Trump’s influence. There’s been a lot of criticism of Democrats spending on weak MAGA candidates in the primaries. But these candidates never would have gotten nominated in the first place if Republican voters hadn’t happily supported them, despite their flaws and despite Democrats desperately wanting to run against them.

One hopes the lesson has finally been learned that Trump — no matter how much Republicans admire his combativeness, appreciate his entertainment value and detest his enemies — is not a sound electoral guide, to put it mildly.

Trump didn’t win a majority in either of his presidential elections, even the one he won; he was never anywhere close to 50% in the RealClearPolitics polling averages in either of his races; and his average job approval rating during his presidency never approached 50%, either.

Trump won in 2016 courtesy of Hillary Clinton, the Electoral College and a dollop of luck. At the end of the day, he’s a plurality, not a majority, candidate. And he’s drawn to other plurality candidates, who, lacking the advantage of running in races with an Electoral College or against Hillary Clinton, tend to lose. Winning 46.1% worked for Trump in 2016, but it’s a formula for failure for everyone else.

There are early signs that voters have taken on board the contrast between Trump, who was embarrassed on election night and has been attacking other Republicans in crude terms, and Ron DeSantis, who won a crushing re-election victory and hasn’t felt it necessary to throw out wild charges or insult other party leaders to try to deflect blame from himself.

The polls are very early but telling. A YouGov survey had DeSantis up over Trump nationally in a hypothetical 2024 matchup, 42-35. A new 2024 poll in Texas has DeSantis up by a similar 43-32. And a WPA Intelligence poll has DeSantis beating Trump in Iowa, New Hampshire, Florida and Georgia.

There will have to be much more of that to signal that a fundamental, enduring shift has taken place and coax party leaders out of their long defensive crouch. The party won’t decide to turn against Trump until voters give it clear, unmistakable permission.

Apple is pushing a rare discount on Macs for small businesses