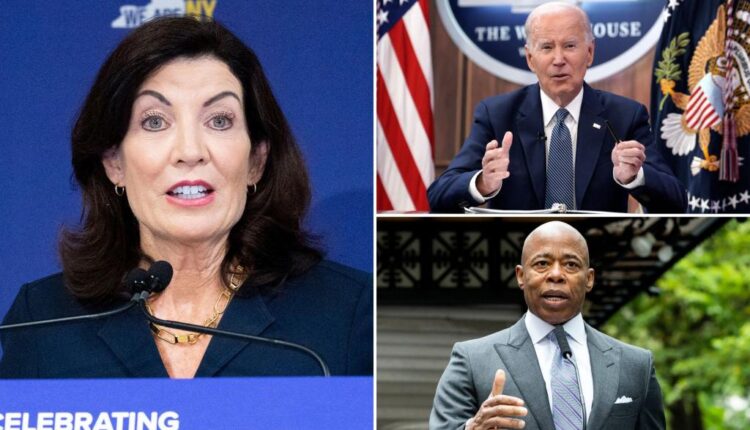 My experience with most politicians, even if I don’t agree with them, is that they usually act logically within the context of their era and the problems they face. These days, however, I’m at a loss to figure out why leading ones are doing what they’re doing.

Take Joe Biden — please! His presidency is a black hole that defies understanding because of his doddering condition and because he squandered a mandate for moderation.

Mr. Unity, immediately upon election, outsourced his agenda to Bernie Sanders and others on the far left. Their radical, divisive policies are sapping American power, economically and militarily, and leading to Biden being compared to Jimmy Carter, which is not a compliment.

Mayor Adams is another mystery. He was elected to make New York safe again but, after achieving modest gains, inexplicably seized on the migrant situation as the cause nearest to his heart.

Gov is a puzzle

It’s an error that could derail his mayoralty because it’s a problem City Hall can’t solve until Biden stops the endless caravans crossing the border. Nonetheless, Adams is talking about spending $1 billion to cover the cost of migrant shelter, food and health care while he demands cuts in the NYPD budget just as crime and disorder grow. Where have you gone, Eric Adams?

Then there’s Gov. Hochul, who is a puzzle for the most basic question of all: why?

Why does she want to keep the job when she doesn’t show any interest in doing the things most New Yorkers care about?

In the beginning, with an upbeat and gracious manner, Hochul was a welcome change from the scowling, bullying disgraced Andrew Cuomo.

After toiling for years in relative obscurity as second fiddle in Cuomo’s one-man band, Hochul promised a new beginning for a state that desperately needed change at the top.

But style only gets you so far and in matters of substance, Hochul doesn’t appear to have any ideas of her own. Or any ideas at all.

More than a year into her tenure, Albany’s usual dysfunction has morphed into paralysis as she waits for the Legislature to lead.

It can’t work that way — the governor must set the agenda and push for it relentlessly. Especially with Democrats holding all the power and factions fighting each other, a sensible governor is needed to impose order and move New York forward.

But Hochul, after slapping a smiley face on the governor’s office, hasn’t tried to make a dent in New York’s fundamental problem. The once-great Empire State is continuing to decline in comparison to vibrant and growing states like Florida and Texas.

Rotten policies make it unattractive to businesses and residents who don’t have to be here. Exorbitant taxes and regulations, wasteful spending, government corruption and out-of-control crime create a second-class state with a first-class arrogance.

New York’s budget, at $220 billion, is nearly twice the size of Florida’s, at $112 billion, and Texas’, at $120 billion, despite having fewer people than those states.

The fact that much of that money — $35 billion — goes to schools allows Hochul and lawmakers to claim they are “investing” in the future. Bull.

As the Citizens Budget Commission pointed out, spending from all sources now totals $34,000 per student, almost double the national average.

That might be defensible if student achievement was also off the charts. But as the CBC noted, the spending comes “without delivering above-average results.”

A separate study by state Comptroller Tom DiNapoli followed 71,210 high school students and found that three-quarters graduated on time in 2019, but nearly half “were not college ready.” Of those who enrolled in higher education, 38% dropped out within six months.

So where’s Hochul in all this? Nowhere. She’s missing in action or, more accurately, inaction.

Running for a term of her own is the perfect time to stake out an agenda of her own. Otherwise, what’s the point? Surely she can’t be satisfied to hopscotch around in government aircraft just to cut ribbons and give cliched speeches?

Or maybe that’s all she wants. Because the one thing she focused on like a laser was speed-dialing Cuomo contributors to raise nearly $50 million in campaign cash so she could keep the gig. Her pleas led to several allegations of pay-to-play, with taxpayers getting hosed even if the deals are legal.

Again, for what? The campaign money she spent so far has gone almost entirely to TV attack ads against GOP opponent, Rep. Lee Zeldin, for being an ally of former President Donald Trump and being pro-life.

Once she urged Zeldin to leave the state, suggesting his positions mean he’s not really a New Yorker.

But what does Hochul stand for? Your guess is as good as mine. She told some donors she doesn’t want to make promises now, but will have an aggressive agenda after the election.

More bull. If she won’t promise it now, she won’t deliver it later, whatever it is.

Zeldin himself was attacked at a summer rally, and the Sunday shooting outside his Long Island home that left two teenagers wounded made him a kind of everyman when it comes to crime.

His concern for his teenage daughters, who were home at the time, is something all New Yorkers can relate to. It’s also the sort of defining incident that should cause a governor to wonder if there isn’t more she can do to make all New Yorkers safer.

But if Hochul is asking herself that question, she’s also keeping that a secret.

Like Nancy Pelosi, who said Congress had to pass Obamacare to learn what was in it, Hochul demands that voters elect her before she tells them what she’ll do in the next four years.

Amid talk of a slowing economy, reader Mark Lampe is having a flashback. He writes: “I am reminded of Alfred Kahn, Jimmy Carter’s ‘inflation czar,’ who warned the administration’s policies could lead to a depression.

Lampe adds: “Unless there are big changes now, it looks as if we will end up in a whole fruit salad.”

I’m not alone in seeing Attorney General Merrick Garland as a partisan hack. The Florida Democratic Party reached the same conclusion, asking in an email for a donation and a signature on a petition “to pressure Merrick Garland to protect our democracy and finally charge Donald Trump for his crimes.”Launching a “pressure” campaign on an attorney general is hardly normal. But because the target is Trump, the rules don’t apply.

Biden has delusions of grandeur — not to mention delusions