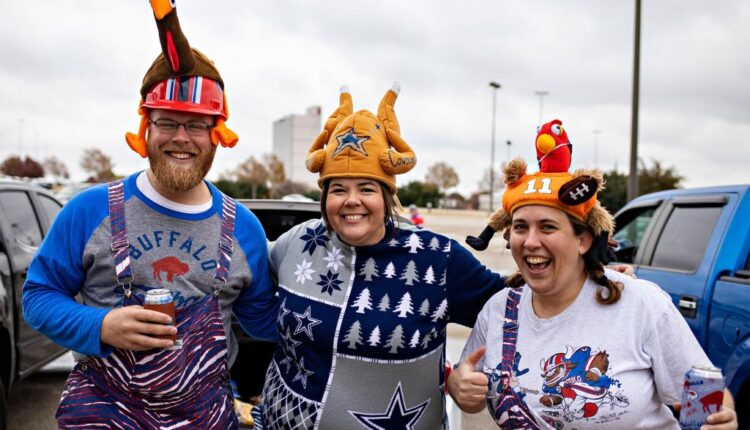 The Pilgrims celebrated the first Thanksgiving without football, but the game and the holiday have now become so intertwined that one almost wonders how they managed it.

The most American holiday and the most American sport — both American inventions with only limited uptake overseas — are joined at the hip, from high-school games in the morning to the NFL broadcasts that provide a daylong backdrop to family gatherings.

If Jennie Augusta Brownscombe, whose famous, highly idealized painting of the Pilgrims celebrating at Plymouth has done so much to define our image of the day, were to take up the topic of Thanksgiving again, she might be tempted to paint the Dallas Cowboys lining up for a third-and-five play at a packed AT&T Stadium.

Like the best traditions, the association of Thanksgiving and football arose organically, is very old, has a local element and has layered memory atop memory down through the decades.

By now, it’s almost pointless to ask why the holiday and football go together. The answer, more or less, is that it’s almost always been thus.

Yale and Princeton put Thanksgiving football on the map beginning in 1876, when they played a game in the New York area (Yale won by a resounding 2–0). Soon enough, the annual game became an obsession that drew tens of thousands. By 1893, the New York Herald was writing: “In these times Thanksgiving Day is no longer a solemn festival to God for mercies given. It is a holiday granted by the state and the nation to see a game of football.”

Various professional leagues began playing on the holiday, and so did high schools.

In Massachusetts, the Wellesley Raiders and Needham Rockets have played since 1882, Boston Latin School and English High School since 1887. Boston Latin and English played during the world wars and the Spanish Flu, until the coronavirus ended the long run of continuous annual games in 2020. There are dozens of examples from all around the country of teams playing one another on Thanksgiving for 100 years or more.

The NFL played its first game on the holiday in 1920 (Akron Pros 7, Canton Bulldogs 0). The Thanksgiving game as we now know it arose in 1934, when the Detroit Lions began playing home games on the day.

NBC Radio broadcast the initial, sold-out game between the 10-1 Lions and 11-0 Chicago Bears. It was a huge hit. After Detroit took a lead into halftime behind two Ace Gutowsky touchdowns, Chicago pulled out a thrilling 19-16 victory on the strength of a two-yard pass from Bronko Nagurski.

The Cowboys grabbed their own piece of Thanksgiving in 1966. The team’s owner wanted more publicity for the young franchise, and the first game drew 80,000 fans. The Cowboys have played at home on the holiday continuously since then, with the exception of two years in the 1970s when the NFL believed (erroneously) that it could boost the St. Louis Cardinals with games on the holiday.

Now, a third game has been added to the NFL schedule, lest too much time pass on the day without a game on TV.

It’s not surprising that America’s great folk holiday and festival of abundance has become joined to its most popular, wildly entertaining game.

As Melanie Kirkpatrick notes in her book, “Thanksgiving: The Holiday at the Heart of the American Experience,” people in the 19th century were already wringing their hands about football becoming too large a part of the day.

The Chicago Tribune asked high-profile Chicagoans to share their views of the appropriateness of football’s role. A clearly very wise rabbi opined, “A good God will delight in a joyful, manly people and accept the shout of victory won in manly contest as a thanksgiving offering.” He added, “There is a time for everything: a time to pray and a time to play.”