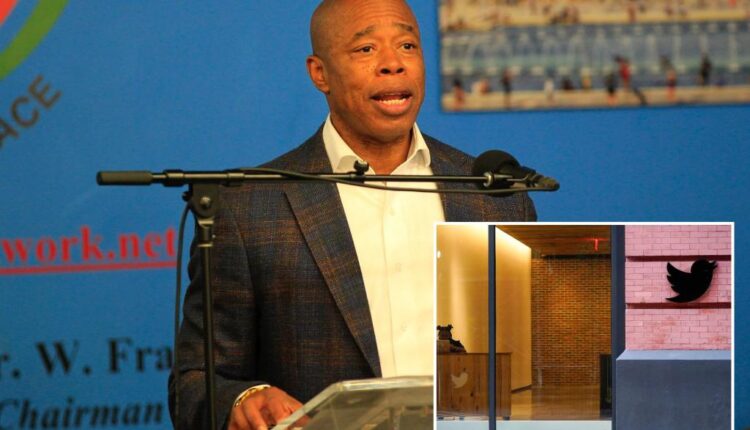 Not even a week after Facebook laid off 871 New York City employees and not even two after Twitter laid off 418 locals, Mayor Eric Adams announced the city’s deficits over the next 3 ½ years are $1.5 billion worse than he projected in July, for a total $13.4 billion budget gap.

Welcome to the city’s tech recession.

For three decades, going back to early-’90s Mayor David Dinkins, New York has courted the tech industry to make us less dependent on Wall Street jobs.

And this effort worked. Last year, tech employed 172,570 people in the city, per an October report by state Comptroller Tom DiNapoli, up from fewer than 60,000 in 1995.

New York captured an outsized share of nationwide tech growth, propelling the state as a whole to the nation’s third-largest tech employer, with 321,000 jobs, behind California (1 million) and Texas (half a million).

The tech sector accounts for just 4.9% of city jobs, says the comptroller, but 10% of wages. With the city and state’s progressive tax structure, that means they pay an even higher share of income taxes. And techies pay state and local taxes when they cash out stock options.

This oversized contribution to the city budget is bested only by Wall Street, whose similar number of employees — also about 5% of the city’s private-sector workforce — make up about 22% of private-sector wages.

Tech has been about all that’s kept New York going since 2020. Tech jobs increased by 34% from 2016 to 2021, DiNapoli notes, while the total private sector lost 3.3% of its jobs. “Job losses,” he says, “would have been worse by a third” during the pandemic “if not for the tech sector.”

All industries suffer regular downturns, but it’s about the worst time for New York City to see its newish golden goose suffer one. We’re still missing 2.4% of our pre-pandemic private-sector jobs, or more than 100,000 positions, pretty much the worst performance in the country.

Then there’s real estate. Tech was the only industry actually adding to its commercial real-estate base during 2020 and 2021, when everyone else was shedding floors. But now Manhattan’s office-vacancy rate is 15%, twice the pre-COVID rate, and still rising as tech, too, tries to sublease its office space to other tenants.

And tech may be facing not just a short-term economic blip but a longer-term employment decline. For two decades, since the recovery from the 2000 tech-bubble burst, companies like Facebook and Google have minted money. Even companies without consistent profits — like Twitter and Uber — had no problem attracting investor cash.

So there was no cost discipline in the tech sector. Facebook’s employee roster was up nearly 30% just in the past year, to more than 87,000 worldwide.

Facebook is still a profitable company — but with the Nasdaq index of tech stocks down 31% off its high of a year ago, investors are far less likely to pump money into unprofitable companies, like food-delivery firms, meaning the gravy train of high-paying jobs may have halted indefinitely.

So what is Adams doing to prevent even higher budget deficits? Despite gestures toward cutbacks, city-funded spending for this fiscal year, at $78.8 billion, is 5.9% above Mayor Bill de Blasio’s spending last year. (The remainder of the city’s $104 billion budget comes from federal and state sources.)

And that’s even though the city’s public-sector workforce has shrunk by 6.4% since the pandemic, as people have quit or retired rather than return to work.

If we’re spending more to pay fewer people, what is the extra money going to?

Partly, it’s costs for pensions and health care — but also for unaccountable, opaque, “emergency” contracts, like erecting a tent city for migrants on Randall’s Island only to immediately tear it down, and other temporary resources for the border crisis, totaling at least $16 million.

And that’s also before we’ve even begun to address a key question: With the city’s labor contracts expired, raises to keep up with inflation would cost an additional $3 billion a year.

Adams has a lot of work to do — work that our tech bros can’t magically solve.