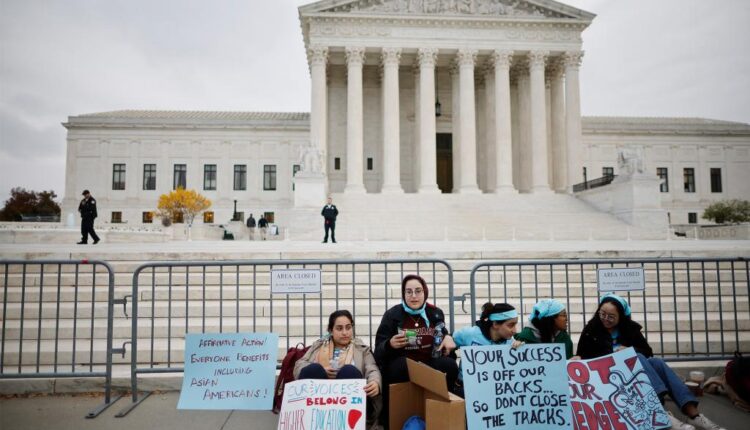 Lawsuits against Harvard University and the University of North Carolina are exposing the crude and dehumanizing racial sorting that goes on in elite universities’ admissions offices.

UNC’s application form asks young people to check a box identifying themselves as (1) Asian, (2) Native Hawaiian or Pacific Islander, (3) Hispanic, (4) White, (5) African American or (6) Native American. White Hispanics with ancestors from Spain are lumped in with Central American immigrants. The black child of a Harvard-trained doctor or diplomat checks the same box as a black applicant living in a homeless shelter. The Asian category absurdly covers 60% of the world’s population, from China to Japan to India.

Applicants who mark Hispanic or African American win acceptance with test scores and grades far below what whites and Asians, on average, need to get in, per data presented to the Supreme Court.

Such so-broad-as-to-be-meaningless categories are no way to recognize the humanity and individual merit of college applicants.

On Monday, the Supreme Court justices grilled Harvard and UNC attorneys. The questions indicate the court is likely to outlaw using race to determine who is accepted.

Universities could still consider the achievements of applicants who convey in their personal essays or interviews that they have overcome hardships related to their race. Patrick Strawbridge, a lawyer for Students for Fair Admissions, which brought the lawsuits, explained, “What we object to is a consideration of race and race by itself.”

Harvard lawyer Seth Waxman objected that while race is sometimes the determining factor in who gets into Harvard, other times being “an oboe player in a year in which the Harvard-Radcliffe Orchestra needs an oboe player” will tip a student in. Chief Justice John Roberts instantly shot back, “We did not fight a civil war about oboe players.”

The left protests that outlawing racial preferences will be yet another departure from precedent. Not true. The precedent is Grutter v. Bollinger, a 2003 ruling that upheld the use of race at the University of Michigan Law School. But Justice Sandra Day O’Connor, who wrote the Grutter opinion, anticipated that racial preferences would be temporary and unneeded in 25 years.

Justice Amy Coney Barrett asked the Harvard and UNC lawyers repeatedly, “When is your sunset?” They had no answer. The schools have no intention of ending racial preferences voluntarily.

US Solicitor General Elizabeth Prelogar, representing the Biden administration, cautioned that overturning racial preferences would send “shock waves” through every sector of society. That’s actually good news, especially for employees in the corporate world who are frequently being told, “We already have too many white guys.”

Some 80 major companies, including Apple and Google, signed onto a brief supporting Harvard and UNC. A trade group representing human-resource departments in 600 firms also filed a brief backing racial preferences, quoting a McKinsey & Company report that said, “The business case for diversity, equity, and inclusion is stronger than ever.”

Not one company indicated support for color-blind admissions. The gap between the business world and the American public is staggering. Corporate America’s HR departments are pushing DEI, but most Americans want people judged on their individual merits. A Pew Research poll found 74% believe race and ethnicity shouldn’t be factors in admissions decisions.

Justice Elena Kagan asked about preferential hiring to create a diverse police department or a diverse set of law clerks. She challenged the notion that “it just doesn’t matter if our institutions look like America.”

An attorney for SFFA replied that “merit and your worth as a person” are “not correlated with your skin color.” Amen.

Expect the court to look askance at DEI programs in businesses that push aside white males to meet numerical goals for the advancement of underrepresented minorities. Several big companies, including AT&T, are already getting sued for allegedly doing that.

Another SFFA lawyer summed up the issue: Racial classifications “cause resentment by treating people differently based on something they can’t change.”

President Joe Biden promised to unite the nation, but his racial favoritism has done the opposite. A court ruling striking down racial preferences will help bring the nation together.

The ugly facts revealed about admissions at UNC and Harvard confirm what Chief Justice Roberts said long ago: “It is a sordid business, this divvying us up by race.”