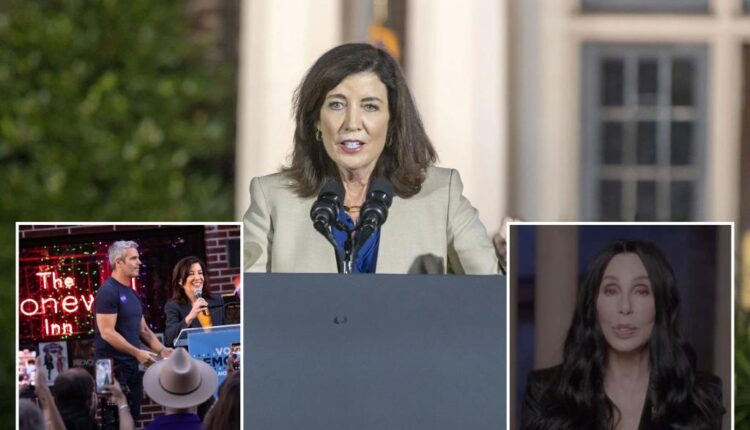 Kathy Hochul has no business being governor, and to hide that fact, she’s been trotting out celebrities to tell New Yorkers to vote for her — as if we care even a little who Hollywood thinks should run our state.

She ascended to power after Andrew Cuomo was ousted by political rivals, and now that New Yorkers have a chance to get her out of Albany, this is her last-ditch effort to retain that unearned power.

What Hochul and her fellow Democrats forget, however, is that New Yorkers aren’t impressed with celebrity status. They’re not swayed by bling, they are not charmed by the glitterati. Celebrities come to Gotham precisely because New Yorkers don’t give them a second glance — they can walk the streets of the greatest metropolis in the world unencumbered by their fame.

That’s simply to say New Yorkers know celebs are no different from the rest of us, and their backing means little if anything at all.

Yet Hochul has embraced endorsements from high-profile celebs like Cher, Amy Schumer, Leonardo DiCaprio and Mark Ruffalo — showing she’s sadly out of touch with the city and the state. Instead of trying to reverse terrible policies like bail reform that have led to skyrocketing crime, the gov prefers to hobnob with the rich and famous.

She has spent her time changing legislative language to read “incarcerated person” instead of “inmate,” working to bring biological males who identify as transgender into women’s prisons and advocating New York become a national leader in sex changes for kids — and celebs have eaten it up.

Schumer, who has made her career on jokes about being fat and female, backs Hochul as “a champion” on abortion — which is enshrined in New York law and literally not on the ballot this election. Schumer’s big pitch: Hochul’s great on “abortion access, gun safety, and equality,” while Lee Zeldin “is Trump 2.0.”

Cher hit the stump for Hochul via a social-media video. “Right now, you have a Trump supporter,” she begins, “trying to oust your Democratic governor, Kathy Hochul.” As she reads pretty passionlessly from a script — you can see her eyes moving back and forth — she claims she’s spent half her life in New York, as if that gives her authority to push her politics on the state. When was that, Cher, 40 years ago?

“This man Lee Zeldin,” she goes on, “has riled up the MAGA base to support him” — before noting that the race is close. Yes, Zeldin, once thought a distant long-shot, has overtaken Hochul in some surveys, proving it’s much more than “the MAGA base” fired up to replace the gov.

Cher leaned into the absurd idea Zeldin and other conservatives across the country want to ban the word “gay” because they don’t want pornographic content in schools or teachers keeping their kids’ in-school gender transitions secret. Zeldin’s running mate, NYPD vet Alison Esposito, is openly gay.

Mark Ruffalo, of “Hulk” fame — something this New Yorker had to look up, he’s that memorable — is one of Hochul’s strongest supporters, touting her stance on fighting climate change. The gov plans to follow California Gov. Gavin Newsom into the future by banning sales of gas-powered cars by 2030.

Ruffalo called Cher an “inspiration” and has shared his own videos. “New Yorkers, join me in telling Republican candidate for Governor Lee Zeldin to #FrackOff!” he tweeted alongside one. “Let’s get out the vote for Democratic Gov. Kathy Hochul! She will protect New York’s fracking ban & lead on climate action.”

Leo DiCaprio has more star power. But he merely repeated what Ruffalo said — likely because celebrities aren’t paid to think for themselves.

Bravo talk-show host Andy Cohen joined Hochul in an appearance to urge LGBTQIA+ people to get themselves to the polls. Hochul made the false claim that Zeldin is trying to “take away the rights” of the LGBTQ community — yet there are no rights gay or trans people don’t have in New York and no way they could lose those rights. (Plus, again: He chose a gay running mate.)

Celebs and other high-profile Democrats think that repeatedly calling Zeldin a Trump supporter, an election denier, a fracker, anti-LGBTQIA+ will turn Hochul into a stand-out candidate. But when an incumbent can’t run on her own record and has to trot out celebrities to tout lies about her opponent, it’s not the opponent that is the problem — it’s the incumbent herself.

Libby Emmons is the editor-in-chief at The Post Millennial.