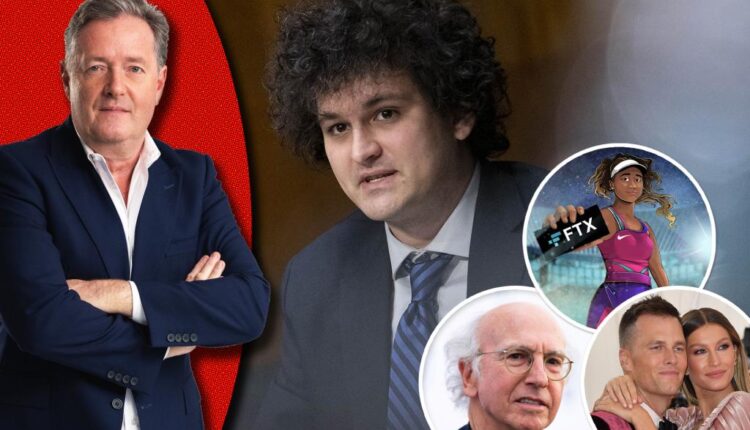 We should have seen it coming.

Someone called “Bankman-Fried” is probably not the best guy to trust with your money.

Especially given he’s just 30 years old, looks like a Fyre Festival committee member, slobs around in the tax-free Bahamas in his shorts and sandals, and until a few days ago, reigned supreme in a financial world dubbed a delusional “rat poison” by the world’s greatest businessman, Warren Buffett.

Unfathomably, Sam Bankman-Fried managed to build a cryptocurrency exchange empire, FTX, which became the third-biggest in the world with a value of $32 billion before it all came crashing down last week — leaving up to a million people facing a potential wipeout on their investment.

How did he do this?

Well, largely by recruiting all sorts of celebrities to endorse his risky business, led by NFL star Tom Brady and his estranged wife, Gisele Bündchen, basketball stars Shaquille O’Neal and Steph Curry, tennis star Naomi Osaka and comedian Larry David, who even appeared in a lavish Super Bowl ad for investing in FTX.

I was there in LA’s SoFi stadium to see the commercial in which David dismissed some of humanity’s great innovations, including the wheel (“one of the worst ideas I’ve ever heard”), the light bulb (“it stinks”) and even the Declaration of Independence (“stupid people vote??”).

It closed with David also dismissing the chance to invest in FTX (“I don’t think so … and I’m never wrong about this stuff”), and then a warning flashed up: “Don’t be like Larry. Don’t miss out on crypto, the next big thing, FTX.”

Everyone laughed, including me.

But those who took that advice won’t be laughing today.

Nor will Larry David, as he and the other big-name FTX ambassadors are all facing a class-action lawsuit filed Tuesday that alleges they gave credibility to the exchange and are therefore as guilty as Bankman-Fried.

“Part of the scheme employed by the FTX Entities involved utilizing some of the biggest names in sports and entertainment to raise funds and drive American consumers to invest,” the lawsuit alleges, “pouring billions of dollars into the deceptive FTX platform to keep the whole scheme afloat.”

Bankman-Fried, who liked to live the jet-set high life of the celebrities he hired, was not the only one to use star power to promote crypto exchanges.

“History,” he declared, “is filled with almost,” haunted by “those who almost adventured, who almost achieved, but ultimately, for them, it proved to be too much.”

As Damon spoke, he passed through a “Museum of Bravery” that showed a mountain climber reaching a summit, an aviator in an early plane, astronauts marching toward a rocket. “In these moments of truth,” he said, “these men and women — these mere mortals, just like you and me — as they peer over the edge, they calm their minds and steel their nerves with four simple words that have been whispered by the intrepid since the time of the Romans: Fortune favors the brave.”

Yet, he added, there are also “the ones who embrace the moment and commit.”

Cue Damon staring out at the skies, and the Crypto.com logo appearing on what looks to be Mars.

The only problem is that had you committed to buying cryptocurrency on Damon’s recommendation, you’d have lost your fortune being brave.

Then there’s the scandal of reality bimbo Kim Kardashian being paid $250,000 to tout obscure crypto token firm Ethereum Max to her 225 million Instagram followers in June 2021.

The value of the company has tanked by 98 percent, causing investors to lose most of their cash on paper, and she was fined $1.3 million by the feds for not disclosing that she’d been paid to hype it.

Of course, the real victims aren’t the super-rich and frankly shameful celebrities now being fined, ridiculed, or facing lawsuits, but the unsuspecting public who raced to do what their idols told them to do without any understanding of what they were getting into.

In fact, I suspect few of the celebrities have much of a clue about cryptocurrency either, because none of it makes sense.

Just ask Warren Buffett, who has tried for the past eight years to warn us of its dangers and has refused to have anything to do with it.

In 2014, he said: “It’s not a currency. It does not meet the test of a currency. I wouldn’t be surprised if it’s not around in 10 or 20 years. It is not a durable means of exchange, it’s not a store of value. It’s been a very speculative kind of Buck Rogers-type thing and people buy and sell them because they hope they go up or down just like they did with tulip bulbs a long time ago.”

In 2020, he told CNBC: “Cryptocurrencies basically have no value and they don’t produce anything. They don’t reproduce, they can’t mail you a check, they can’t do anything, and what you hope is that somebody else comes along and pays you more money for them later on, but then that person’s got the problem. In terms of value: zero.”

Unfortunately for millions of members of the public, they chose to ignore the Sage of Omaha and instead relied for their investment advice on an ill-informed bunch of greedy entertainers keen to make a quick big buck with woeful disregard for the massive risks they were encouraging fans to take.

And now, those fans are reaping the pain of such folly.

As for those who paid the celebrities to endorse their crypto crap, they’re even worse.

In a wild interview with Vox, Bankman-Fried admitted he’d “f–ked up” but called ethics a “dumb game we woke Westerners play where we say all the right shiboleths [sic] and so everyone likes us.”

Then he mocked financial regulators, who keep reckless liars like him in check and blamed his girlfriend for the collapse of FTX.

What makes all this massively more disturbing is that Bankman-Fried has been the second largest donor to liberal politicians and groups after George Soros. He made a $10M donation to Joe Biden for his 2020 election campaign and gave a total of $39.2m for congressional Democrats in the midterms.

What did he hope to get in return?

In May, he addressed Congress to urge lawmakers to relax restrictions on the cryptocurrency industry.

I’m doing the math, and it’s not pretty.

The guy was a self-interested scam artist, a huckster, a nerdy version of Bernie Madoff.

“Sometimes, life creeps up on you,” he whined.

No, sometimes, a creep like Bankman-Fried comes into your life and ruins it. Aided and abetted by your uncaring heroes.