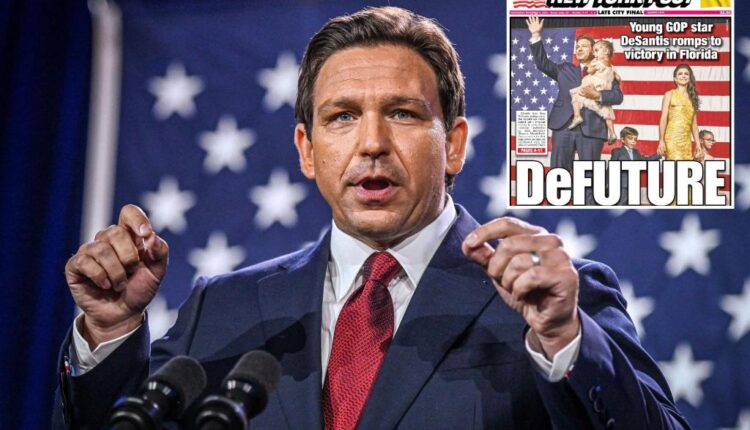 An old proverb says that the dogs bark, but the caravan goes on. In an updated version, Donald Trump plays the noisy dog as Ron DeSantis marches to victory.

The Florida governor won a smashing blowout Tuesday by routing Democrat Charlie Crist by nearly 19 points, a margin that no poll predicted. He followed that with a raucous speech that was both a celebration and a skillfully worded test of national themes as he declared, “Florida is where woke goes to die.”

And, likely referring to the fact that he won ­Miami-Dade County, a longtime Democrat stronghold that is 70% Latino, by double digits, DeSantis declared, “We not only won election, we have rewritten the political map.”

Indeed he has, with each cycle seeming to bring more Latinos into the GOP camp, with the Miami-Dade victory a huge leap forward.

Suddenly, 2024 doesn’t feel so far away. Nor does Trump look like the only choice or the inevitable nominee.

In that sense, the night was a coming-out party for DeSantis, who has been wary of talking about anything other than reelection. He won narrowly four years ago, but his margin Tuesday will garner enormous attention among Republicans desperate for an alternative to Trump.

Chants of “two more years” captured the sense of many at the governor’s victory party that the statehouse is just a stop on the way to the White House.

Naturally, all this is driving Trump further up a wall. As DeSantis closed in on victory in recent days, Trump began sniping from the sidelines, making veiled threats that he had dirt on DeSantis and warning him not to run in ’24.

It was a shameful spectacle, and yet so par for the course that it garnered mostly shrugs. Trump also probably aimed to reduce DeSantis’ margin of victory and thus reduce the threat to himself for the GOP nomination.

DeSantis’ speech was short — under 10 minutes — but it was as impressive as his margin. Substantive, sharp and capturing the rise of Florida as a haven for blue-state refugees, it was a masterpiece of the moment.

As a result, Mount Trump can be counted on to continue to simmer and smoke before he finally explodes. It may not matter because in DeSantis, he might have finally met his match.

This new AirTag competitor is cheaper and better

The brand-new Apple Music Replay might finally be an…