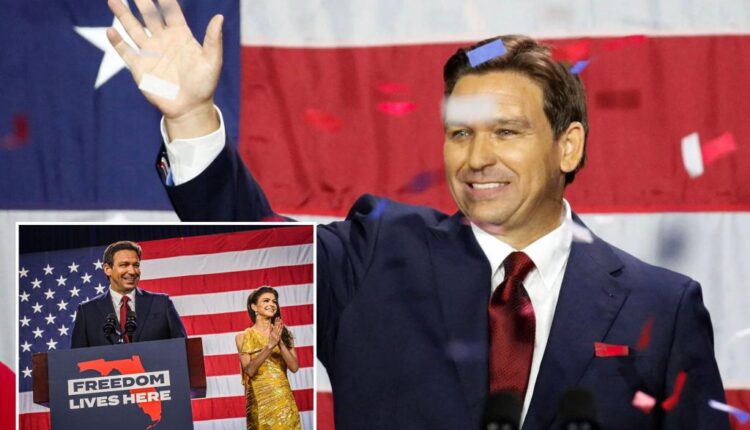 Tuesday’s results show Florida’s Gov. Ron DeSantis would make one helluva contender in the 2024 presidential race, though not the only one.

DeSantis’ victory was historic: He beat ex-Gov. Charlie Crist by a whopping 20 points, the biggest margin in any Florida gubernatorial race in 40 years. And no Florida gov running for re-election over that time ever improved on his initial vote by more than 3 points; DeSantis’ 20-point spread was up from a mere 0.4 point margin in 2018.

He also took heavily Hispanic Miami-Dade County, the first GOP gov candidate to do so in 20 years, winning 55% of the vote. That’s the largest margin in 40 years. Oh, and 65% of voters in majority-Hispanic precincts backed him, a huge achievement for a Republican.

DeSantis is right: The results prove he earned voters’ support by making Florida “a refuge of sanity when the world went mad,” particularly during the pandemic. He took great heat for bucking federal COVID advice, keeping schools and businesses open and opposing mandates. And, yes, by maintaining “law and order,” protecting parents’ rights and respecting taxpayers.

He’s right, too, to see his policies as a model for the nation as Americans in states and cities run by “leftist politicians” have seen crime “skyrocket,” taxpayers “abused,” “authoritarianism imposed” and “American principles discarded.” Many have “voted with their feet,” fleeing to . . . Florida.

As for ex-President Donald Trump’s bluster that DeSantis will be “hurting himself” if he goes for the White House: Sounds like fear talking, Don, and the fate of your candidates Tuesday looks terrible for your increasingly poor judgment, which grows parallel to your desperation.

Even amid another Trump run, the GOP (and nation) is best-served by more competition — a field that might at first include not just DeSantis, but the likes of Sen. Tim Scott (SC), Gov. Glenn Youngkin (Va.), ex-Secretary of State Mike Pompeo and former UN Ambassador Nikki Haley.

Tuesday’s “red puddle” shows the Republicans still need to get their act together to succeed nationwide. Some civilized (well, except for Trump) competition is in order to get in shape to beat the Democrats in 2024.