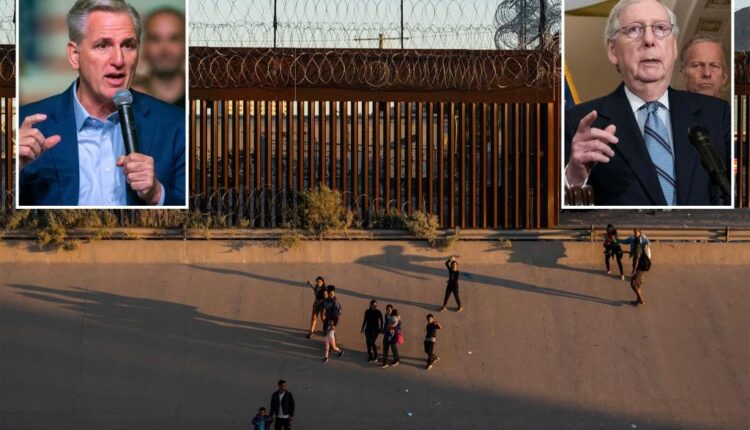 Republicans don’t have to wait for the voters to give them power in November to do something about the escalating crisis at the southern border.

They have an opportunity this week to force the Biden administration to act on border security — if they want to.

In the House, Republican Minority Leader Kevin McCarthy (Calif.) has done the right thing by urging his members to vote against any government funding bill Tuesday that does not address the surge of illegal migration.

In order to avoid a partial government shutdown Friday, Congress must pass a stopgap spending bill — known as a continuing resolution before the fiscal year ends.

The ingenious plan of former Trump adviser Stephen Miller is for Republicans to focus attention on Biden’s border crisis by refusing to pass the bill without an amendment to deal with the invasion at the southern border.

They also must ensure the continuing resolution expires by February so an incoming Republican majority will not be handcuffed next year to a budget that provides no new money for more border patrol agents at a time of unprecedented illegal migration, yet funds 87,000 new IRS agents, three times the number of border agents, to victimize working Americans.

“If Senate leadership stays agnostic on the greatest domestic policy scandal of our lifetimes, it’s going to be read by the public as complicity” with the Biden administration’s open border policies, says Miller, founder of the America First Legal Foundation.

Unless Republicans “raise holy hell” over the border, voters will not deliver the thumping majorities expected in the face of the Democrats’ historic cavalcade of self-inflicted crises — from inflation, crime and foreign policy bungles to the border catastrophe.

Miller says it is beyond time for Republicans in Congress to get strategic about the border, which represents the greatest national security and humanitarian crisis America has ever seen. Apart from millions of illegal migrants who have melted into the country (including 78 suspected terrorists apprehended just the past 10 months), 100,000 Americans have died from fentanyl poisoning this year because drug smuggling is out of control. The consequences will be felt for generations, and the problem is accelerating by the day.

To his credit, McCarthy seems to understand the urgency. He laid down the gauntlet in a statement last week vowing to oppose the spending bill unless it includes border measures.

“President Biden is asking for a government funding bill that simply kicks the can to an unaccountable lame-duck Congress that does nothing to actually address the nation’s problems — especially the crisis at our southern border,” he said.

“Under [Joe] Biden and [Nancy] Pelosi there have been more than 3.5 million illegal border crossings — more than the entire population of Chicago. Democrats’ open border policies have led to an unprecedented crisis, and they have no plan to secure the border.

“If Biden [and the] Democrats don’t use this government funding bill to address the border crisis immediately, I’m voting NO on this bill and I urge my colleagues to do the same.”

But over in the Senate, it’s a different story.

Instead, they have been languidly horse-trading over an amendment West Virginia Democrat Joe Manchin wants to speed up energy permits. This is part of a deal Manchin worked out with Biden, Senate Majority Leader Chuck Schumer and House Speaker Nancy Pelosi to sell out his state and support their misnamed “Inflation Reduction Act,” which really is a $400 billion climate slush fund, administered by that paragon of propriety John Podesta.

The Manchin amendment is opposed by progressives so McConnell should leave Democrats to fight among themselves and focus on the more pressing crisis at the border.

The Dems only can get their spending bill passed in the split Senate if McConnell delivers Republican votes.

Multiple questions from The Post last week McConnell, Thune, Barrasso, and Cornyn were ignored or fobbed off, leading to the inescapable conclusion that they have no interest in trying to fix the Biden administration’s vandalism of the southern border.

Cornyn’s press secretary at least responded, but only to say he is “no longer Whip or in leadership.”

When I pointed out that Cornyn is an influential member of McConnell’s inner sanctum, after decades in official leadership roles, the answer came back. “I have not talked to him about that specific hypothetical [about the border] but if I do will circle back and let you know.”

No reply arrived before deadline.

No, moral sanction for drug dealers is not ‘harm reduction’

Assembly Democrats’ plot to to undo will of Brooklyn voters

Don’t trust mainstream media, SBF’s no schlub and other commentary

How this year’s App Store award winners are putting…

No, moral sanction for drug dealers is not ‘harm…

How this year’s App Store award winners are…

No, moral sanction for drug dealers is…