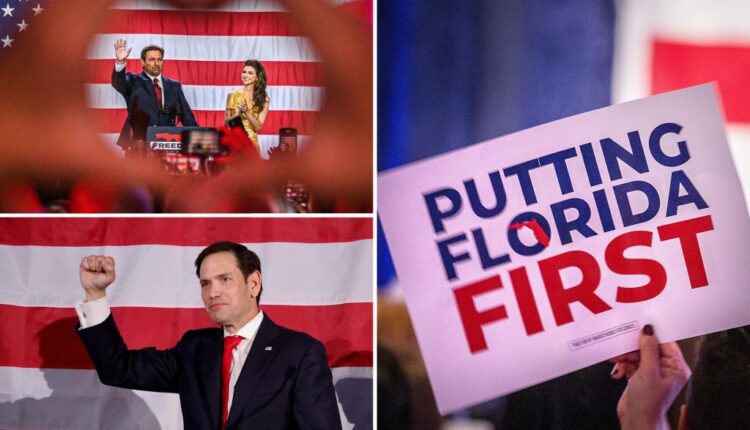 The predicted red wave turned out to be a ripple on the national level, but the same cannot be said of Florida. A massive win for Gov. Ron DeSantis, a larger than expected victory for Sen. Marco Rubio, a GOP pickup of four House seats, historic percentages of minorities voting Republican and Miami Dade going red for the first time since 2002 all spell trouble for Democrats — not just in Florida, but in New York and nationally.

DeSantis trounced Democrat Charlie Crist, who served as Florida governor from 2007 to 2011, when Democrats had a firm hold on the state. Back then, Crist’s brand of moderate progressivism was in vogue, as we saw in leaders like Mayor Michael Bloomberg and President Barack Obama. For good reason: It valued capitalism, fought crime, championed American values and won elections.

Unfortunately, this year Democrats fielded a slate of ultra-liberal candidates, who appear to be out of touch with even their own voters. Florida Democrats, such as Attorney General candidate Aramis Ayala, displayed the party’s new brand of toxic progressivism, which features woke lectures on gender and race, refusal to enforce immigration laws and dismissal of crime as a non-issue. The Florida Democratic Party was unable to corral the left to the center. And the results speak for themselves.

Meanwhile, DeSantis won re-election by nearly 20 points and made significant inroads in deeply blue areas, putting him on strong footing for a presidential bid in 2024. Exit polls show him winning Latinos by 13 points, a significant shift since 2020, when Donald Trump lost them by 7 points. DeSantis also held an edge among Florida’s independents, whom Trump lost in 2020 by 11 points.

These numbers are a sign that key Democratic constituencies feel increasingly abandoned by their own party. If DeSantis could win these votes in Florida in 2022, he — or someone else — could win them nationally in 2024. The prospect evokes the image of another “Gov. Ron” from California, who successfully stole the White House in 1980 from President Jimmy Carter (a Biden-esque figure in his own right).

It’s not too late for Democrats to save themselves if they change their ways. Democrats must realize their stubborn refusal to prosecute crime has cost lives in inner cities and minority communities across America. If Democrats wish to avoid alienating minority voters like they did in Florida, they must reestablish themselves as a party of law and order, and fast.

They must also acknowledge that Democratic failures on immigration are hurting immigrant communities most of all, and that if they allow the crisis to spread nationwide, the rightward shift of Hispanic voters will spread with it.  Like Texas, Florida is a leading indicator of national attitudes on immigration, and the shift of the state’s Latino voters toward the right should scare every supporter of open borders at the DNC.

Finally, Democrats need to acknowledge that DeSantis’ crusade against woke politics, particularly in education policy, appears to have connected with voters. All but the most progressive-minded parents appear to be, at best, wary of the far left’s attitudes on gender and sexual education for children. National Democrats should look very carefully at how these issues played into DeSantis’ hands before the damage spreads.

The adage still holds true: As goes Florida, so goes the nation. This is because Florida is a microcosm of America. Miami is the “new New York,” representing the American Dream to so many, whether immigrants from the south or northeasterners seeking to escape their increasingly chaotic cities. The entire state, far from your traditional red state, is a melting pot of people from all over the country and the world.

DeSantis — perhaps even more than Trump — is now the antithesis of everything Democrats stand for at the national level. The fact that he won so handily in a state long considered “purple” should prevent Democrats from falling into complacency over their stronger performance in other states this week, which says more about the weakness of some GOP candidates than the strength of Democrats.

This year’s midterms were important, but they were not “the most important election of our lifetimes,” as President Joe Biden repeatedly claimed. The next presidential election will be vastly more important. Democrats in New York and across the country have a chance to learn from the glimpse into the future that Florida provided, and to change their ways accordingly. If they do, they’ll have a shot at redemption.

Philip Levine, a cruise-industry entrepreneur, is a former two-term mayor of Miami Beach and onetime Democratic candidate for governor of Florida.

No, voters didn’t back Dem agenda, GOP must probe COVID origins and other commentary