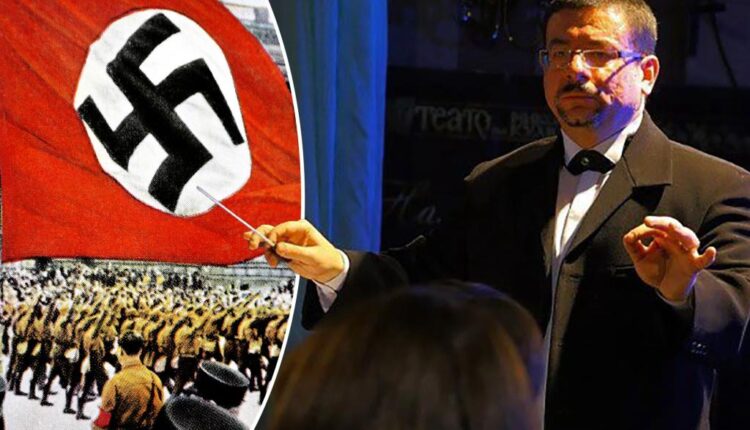 The Russian military has taken numerous pages out of the Nazi playbook in their invasion of Ukraine, but the murder of Yurii Kerpatenko earlier this month is surely one of the most horrific.

Kerpatenko, 46, the conductor of the acclaimed Gileya Chamber Orchestra and the director of the Kherson Music and Drama Theater, was gunned down in his home by Russian soldiers after he vehemently refused to conduct a propaganda concert in honor of the Russian occupation of Kherson, a port city on the Black Sea, according to a statement from the Ukrainian ministry of culture.

“On October 14, it became known about the brutal murder of the chief conductor of the Kherson Music and Drama Theater,” the agency said in a statement, citing local journalist Elena Vanina.

“After Yuri Kerpatenko refused to cooperate with the occupants, Russian soldiers shot him in his own home.”

The announcement sparked outrage around the world, with arts organizations such as Pen America condemning what it called “the state-sponsored execution” of the orchestra leader.

“I still don’t believe all this is possible in my time, in my country,” said one local resident in a social media post after the death was officially announced. “I keep thinking I’m going to wake up and it was all a dream.”

But the Russian invasion of Ukraine has been a Nazi-like nightmare since Feb. 24 when Russian leader Vladimir Putin claimed that he was sending troops to the country to “liberate” the Russian speakers in eastern Ukraine where Kherson is located. The move had echoes of Nazi leader Adolf Hitler’s pledge to “liberate” ethnic Germans in the Sudetenland when he invaded Czechoslovakia in 1938. Putin even waited until Sept. 30 — the 84th anniversary of the disastrous Munich Agreement that permitted Hitler’s annexation of the Sudetenland — to announce the Russian annexation of Donbas, Luhansk, Zaporizhzhia and Kherson.

The Russians had wanted to mount a triumphant concert celebrating “the return of peaceful life” to Kherson on Oct. 1 and demanded the cooperation of the Gileya Chamber Orchestra and its acclaimed conductor, Kerpatenko. The Russians were preparing to weaponize classical music in the service of national glory — another military propaganda tool perfected in Nazi Germany. At Nazi rallies throughout the Third Reich, Hitler co-opted Wagnerian opera and, especially, German composer Carl Orff’s “Carmina Burana” as an anthem of Nazi “youth culture” to extoll the greatness of the German fatherland.

Hitler also regularly interfered in Germany and Austria’s music scene, dispatching Jewish composers and conductors to concentration camps, and deeming others who refused to support the Nazis as “degenerates” and stripping them of their positions.

When German composer Richard Strauss complained about the Nazis in a 1935 letter to his friend and librettist, the Austrian-Jewish author Stefan Zweig, Nazi propagandist Joseph Goebbels had him removed as president of the Reich Music Chamber.

The ambitious Austrian conductor Clemens Krauss was only too happy to take over the positions abandoned by his peers, and soon became Hitler’s favorite conductor, rising through the ranks to become the director of the Bavarian State Opera, arguably the most important cultural institution in the Third Reich. But as I discovered after years of research on my book, “Overture of Hope: Two Sisters’ Daring Plan that Saved Opera’s Jewish Stars from the Third Reich,” Krauss also secretly used his position to help save dozens of Jewish musicians and scholars. He wisely kept his opinions about Hitler to himself.

Kerpatenko refused to keep silent about the Russian invasion, and he refused to be a tool for the military. A Ukrainian patriot, he had posted numerous anti-Russian messages on Facebook after the invasion. On May 6, in a response to Russian Senator Andrey Turchak’s triumphant visit to the region in which he declared “Russia is here forever,” Kerpatenko had clearly had enough.

“Your President pointed guns at our country, took Crimea and part of Donbass,” said Kerpatenko in a repost of a 2021 post during Turchak’s visit. “He wants to be great in your eyes…, but I, a Russian-speaking person living in Kherson, have to suffer at the same time. Don’t save me from myself by threatening me.”

Kerpatenko, an “extremely talented and humble guy,” according to a childhood friend, had grown up an orphan. He was an accordionist and composer before studying to become a conductor, the friend said in a tribute after the death of the conductor on Facebook.

Among his own final Facebook posts on May 22, Kerpatenko could have crafted his own epitaph when he wrote: “It was not for nothing that samurai (sic.) said: Live as if you no longer exist.”

Isabel Vincent is a reporter for the New York Post, and the author of the recently published “Overture of Hope: Two Sisters’ Daring Plan that Saved Opera’s Jewish Stars from the Third Reich” out now.